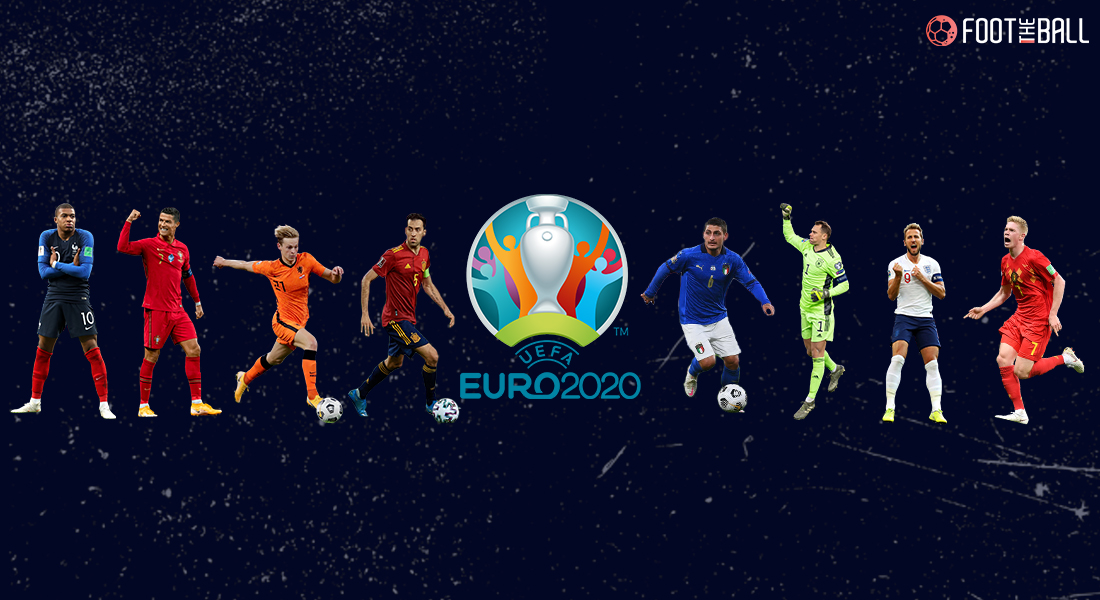 Why Each Contender Will And Won't Win Euro 2020

International football is generally more upset prone due to stronger teams playing together fewer times. Still, favourites for the Euros would be demanding deep runs of themselves. We cover each contender and look at why each will and won’t win the tournament. The team that overcomes its “won’t” part will be the one that emerges as the winner.

Why they will win- Momentum, continuity and outright squad talent

France comes into Euro 2020 riding a wave of momentum having won the World Cup in 2018. The golden generation of France keeps churning great players and after the disappointment of Euro 2016, has really clicked into gear. There have been no heavy changes to personnel and structure and players like Camavinga have only added to an absolute sterling group. On paper, this group of players is probably the best squad in the tournament. Add positive momentum and continuity to that, and France are the overwhelming favourites for the tournament.

Why they won’t win- Slow starters and complacency

France was the favourite for Euro 2016 title as well before Portugal involved them in a war of attrition in the final, eventually settled by an unlikely goal by Eder. International football is rarely free-flowing and the players don’t play together often. This results in sometimes patchy performances. Combine this with France’s tendency to start tournaments tentatively, and the upset alert starts ringing. Coach Didier Deschamps will have to keep his troops’ eyes on the prize.

Best Performance in Euro- Runners-up in 1980

Belgium burst onto the international football scene out of nowhere at the start of the decade. Ranked 66 in 2009, they’ve been the #1 mainly for the past four years on the back of the emergence of a precocious group of players. Global superstars like Eden Hazard, Vincent Kompany, Kevin de Bruyne, Romelu Lukaku have contributed to this surge. Many of the players are at the end of their peak and thus will be even more motivated to win a first Euro title for the nation. History awaits.

Players like De Bruyne, Lukaku and Hazard would be the envy of most teams in international football. However, “Defence wins you titles” is as relevant a quote as ever. Unfortunately, Belgium comes into the tournament with a top-heavy team anchored by defenders who are reaching the end of their peak. There will be doubts on the ability of Vertonghen, Alderweireld, Vermaelen to keep up with their more youthful opposition numbers. Moreover, manager Roberto Martinez’s teams have been notorious for being leaky in defence although Belgium passed the qualifying conceding just three in ten games. Sterner tests await.

Best performance in Euro- Winners in 1988

Why they will win- Motivation to come back with a bang

Netherlands are back at the international scene having missed Euro 2016 and World Cup 2018, a disaster for an international side of their pedigree. There has probably never been a less-fancied Netherlands side in an international tournament but the motivation to come back with a bang and prove people wrong will be in the players’ minds. With talents like Memphis, De Ligt and Wijnaldum, they could make a deep run if things break right for them.

Why they won’t win- Relative strength of other contenders, upheaval in personnel

Had the Euros been held on the original dates in 2020, Netherlands could have called upon the services of arguably the finest Centre-Back in the world, Virgil Van Dijk. However, a serious injury to the defender has seen him withdraw from the team this year. Coach Frank de Boer has also not had much time with the squad. Ronald Koeman’s sudden defection to Barcelona last year left the Netherlands scrambling to appoint a new coach. Less tactical familiarity, loss of a defensive linchpin could spell trouble for them at their first major international tournament since World Cup 2014.

Jadon Sancho, Marcus Rashford, Phil Foden, Declan Rice, Jude Bellingham, and the list goes on and on. Supplementing the youth will be world-class talents of Harry Kane, Harry Maguire, and the resurgent Luke Shaw.  It can be argued that England has never had a better collection of talent in the past decade or so. A Semi-Final appearance in World Cup 2018 bought positivity back to a forlorn nation and they will be hoping to ride that wave of momentum to a famous win.

Why they won’t win- Questions surround the manager. How good are they really?

Gareth Southgate earned a lot of plaudits by getting England into the semis in World Cup 2018 but the quality of opposition then has some experts arguing that the progress then wasn’t a true reflection of the progress being made. England swept aside teams like Panama, Tunisia and Costa Rica before being beaten by genuine strong teams like Croatia and Belgium. Gareth Southgate has to answer the accusations that he isn’t getting the best out of the talent at his disposal.

Why they will win- Treble winning coach at the helm, massive historical pedigree

The new-look Spanish side will be helmed by Luis Enrique, the manager under whom the “MSN” trio of Barcelona tore through club football to win a treble. The youthful vigour of Euro debutants in Pedri, Olmo and such will be supplemented by the winning mentality of the stalwarts like Sergio Busquets. An unbeaten qualifying round suggests that Enrique has this machine purring and the late addition of Aymeric Laporte, who will appear for Spain for the first time after changing his nationality, is a shot in the arm for their prospects.

Why they won’t win- Ghost of the era of dominance from 2008-12 looms large, missing experienced heads

Every Spanish side will be compared to the team that won three tournaments on the trot in 2008, 2010 and 2012. The majority of the experienced heads of that team have seen the sun set on their international careers with the exclusion of Sergio Ramos an exclamation point on that claim. This team is largely unproven at the top international level barring a few players. If the pressure of matching up to the greatest Spanish side of all time eats them up, Spain could have a rude awakening.

Best Performance in Euro- Winners in 2016

Why they will win- They’re the defending champions, and they’ve gotten stronger

The team that won the Euro 2016 was an underdog who upset France in the final. The rise of superstars like Ruben Dias, Joao Felix, Bruno Fernandes and many others make sure that they’ll go into this tournament with the tag of one of the favourites. Rise of new players has been accompanied by the resurrection of a few others like Jose Fonte, who just won a league title with Lille, keeping PSG at bay, and Pepe, who rolled back the years this season. Cristiano Ronaldo can never be counted out and the motivation monster that he is, he’ll be eager to add another trophy to his international cabinet to edge ahead of his arch-competitor, Lionel Messi.

Why they won’t win- The 2016 blueprint might not fit this team anymore, group draw hasn’t been kind

Fernando Santos, the Manager of Portugal, rightly won a lot of plaudits for taking an unfancied squad to the title in 2016. However, the emergence of mercurial attacking talents presents a conundrum for the coach who is renowned for this defensive tactical approach focussed on clean sheets. The “Underdog” tag suited their squad and playing style last Euro which is not the case anymore. Indecisiveness in the tactical approach can thus spell doom for the defending champions, especially when they’re drawn in a group with Germany and France, guaranteeing that at least one contender won’t go past group stages.

Best Performance in Euro- Winners in 1968

Manager Roberto Mancini has done a great job picking up the pieces of Gian Piero Ventura’s broken Italian team that failed to qualify for World Cup 2018. He came in at their lowest ebb and turned Italy into a free-flowing attacking outfit capable of blowing teams away whilst being equally capable of a good-old Italian rearguard action. They breezed through the qualifying phase and with talents like Donnarumma, Verratti coming to the fore, they are a genuine force again.

Four years is a long time in football. That is when Italy last played an international tournament. The squad and manager are unrecognisable from that time. While Roberto Mancini and his fearless Italy team has won a lot of praise for their performances so far, translating those performances under the pressure of an international tournament isn’t a given, where a single loss can send the campaign spiralling. Previous experience counts for a lot in such instances which this team lacks.

Why they will win- A farewell swansong for a World Cup-winning coach, redemption for others

The mood around the German camp lifted considerably after their World Cup-winning coach Joachim Löw gave clarity on his future by announcing his departure after this tournament. The reports of rife between players subsided as everyone came together to win one last tournament for the manager. For others, it is a chance at redemption after a humiliating Group Stage exit in World Cup 2018. Return of veterans like Thomas Muller along with a redemption story that writes itself makes the Germans formidable contenders once again.

Why they won’t win- Spirit needs to be matched with quality, and theirs is not the best in a group of death

Germany would have fancied their chances before the group stage draw was made. However, being drawn in the same group as two pre-tournament favourites in France and Portugal is a poisoned chalice. Germany will have the drive and spirit in plenty but a cursory glance at the squads tells that France and Portugal look stronger than paper. They will need to be at tier best and then some to get out of the group. Otherwise, a muted farewell beckons for their legendary coach.

The joy at a giant-killing is unparalleled in an international tournament. Iceland and Wales’ adventure in Euro 2016 is unforgettable. Greece’s win at Euro 2004 is the stuff of legends. There are some potential banana skins for the contenders this year too.

Buoyed by the efforts of a new-look mercurial midfield, and ably anchored by the world-class David Alaba, they can pose plenty of problems for the big-hitters.

Burak Yilmaz will be eager to keep his purple patch with Lille going at the Euros and if things fall their way, Turkey is a good bet for someone looking to support a dark horse.

As far as “dark horse” goes, Wales has made a habit of overachieving at international tournaments. There has been a lot of upheaval in the Wales camp one would be wise not to bet against a fully focussed “Wales version” of Gareth Bale.

Besides these teams, Croatia will be eager to prove that the World Cup finals appearance in 2018 was no fluke. On the other hand, teams like North Macedonia, Hungary, Czech Republic will be chasing a place in history books by reeling in a big scalp.