They are the biggest critics and it’s hard to please them so when Manchester City’s manager met a young 7-year-old little did he think the grilling he’ll get from the young fan.

In a YouTube video titled ‘Pep’s Taxi’, the former Barcelona and Bayern Munich manager surprises the Braydon Brent, who had no idea he would be meeting his idol.

Young Braydon thought he was just meeting CityTV presenter Chappy and getting a lift in the presenter’s black cab. He was already pretty excited but when he got in the cab he was shocked to find Pep Guardiola sat in the passengers seat waiting for him.

The youngster asks Chappy “is it really him” with Guardiola confirming that it is indeed. Braydon takes his chance to ask the former Barcelona manager to sign Lionel Messi, well when you’ve got the boss’ ear.

Quick to calm down his young fan, Guardiola quips: ‘Are you sure? Okay, we’re going to try.’

Following the arrival of Guardiola to City, many have speculated over whether Messi could swap La Liga for the Premier League, and Braydon is no different.

‘I know Messi’s your friend,’ he said to the 45-year-old. ‘You might give him a call and see if he wants to join us and have a fun time?’

‘Would be nice huh? But maybe it’s a little bit difficult,’ came the instant reply from Guardiola, who seemed only too happy to entertain questions from one of his biggest supporters.

In fact, he even helped the super-fan get his seat-belt on at the start of their journey, before finishing it by asking for a selfie and offering to meet him again. 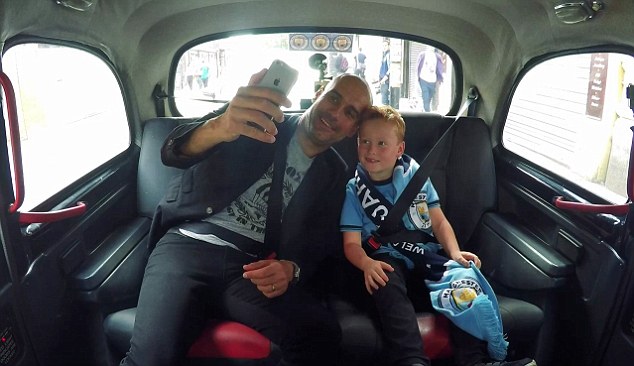