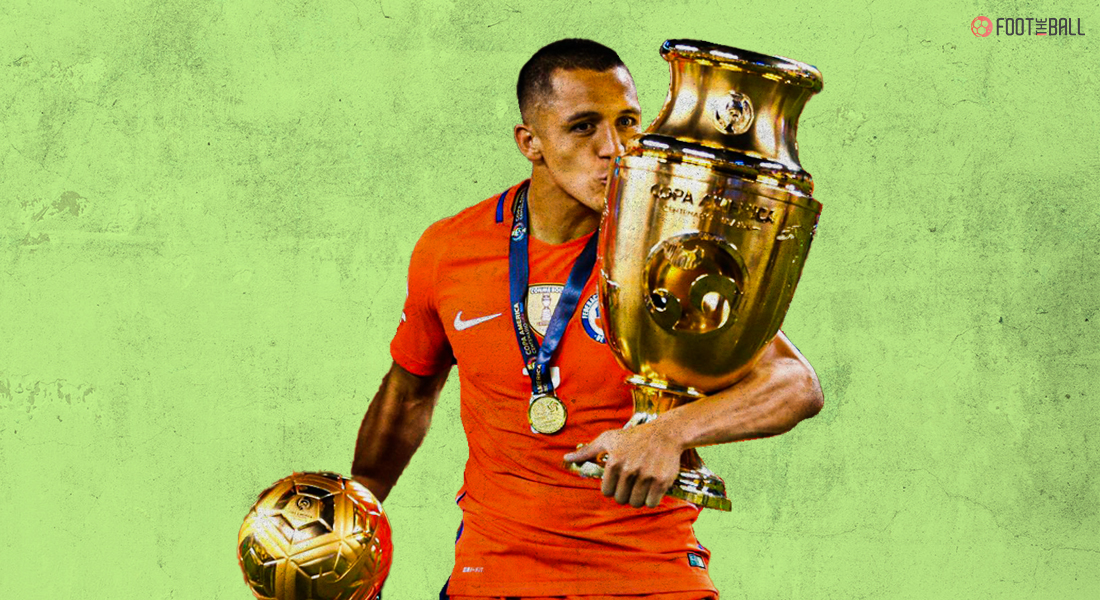 Alexis Sanchez was once dubbed as “El Niño Maravilla” (The Wonder Child), something he has shown constantly at the Copa America. When Sanchez made his move to Barcelona, he became the most expensive Chilean player to date. He was part of the attacking three consisting of Lionel Messi and David Villa. The three forwards shared between them 82 goals on the way to winning the domestic league in 2012-2013. A year later, the Gunners swooped in to bring the Chilean winger to the Premier League. Sanchez made an impact in every club he played for.

The forward is adept at playing anywhere on the front-line. His dribbling and work ethic made him an attacking asset for any manager. He has the ability to create chances from seemingly improbable situations to scoring goals from any side of the pitch. Sanchez’s talents were recognized very early on by his national team and were called up to represent the team since 2006. Sanchez was key to the many victories ‘La Roja’ achieved on the international stage. Although Chile did not make a considerable impact in the World Cups it took part in, Sanchez made a name for himself with some splendid performances.

COOL AS A CUCUMBER

Chile hosted the Copa America in 2015. A tournament that the home fans would cherish for eternity. Chile made a profound statement in World Football when they were crowned the Copa America champions in the edition. Sanchez did not have the best tournament possible. Apart from goals in the opening games and a man of the match award against Uruguay in the quarter-finals, the forward was rather quiet. The usual flair of the elegant winger was lacking in some of his performances.

Chile however did not care. Even with Sanchez in the passenger seat, they were making headway. After overcoming Uruguay and Peru, the supporters had a belief that this would be their year. 99 years after their first match, Chile was going to win the Copa America. Although there was no real action from Sanchez in the 120minutes in the final, he made headlines the very next day. Slotting in a penalty in the shootout to lift the prestigious continental trophy. Sanchez’s lack of performances was forgotten when he pulled off a Panenka in the shootout.

Alexis Sánchez on the front page of La Gazzetta dello Sport with his double for Inter against Parma. Three goals in his last two matches as Inter lead the Serie A on 59 points. Great work.#SerieA #alexis #chilenosporelmundo #chileanfootballnews pic.twitter.com/LVXZE87abf

A year later, Sanchez proved to the world why he and Chile deserved the title as In the Copa America Centenario in 2016, Chile once more lifted the trophy. Once again, beating Argentina in the final. Sanchez’s impact on the matches was profound. Unlike last time, he posed a threat to opposition defence. Although he didn’t win the Golden Boot, he was instrumental in Chile’s success. Often scoring crucial goals and creating danger out of almost barren situations. The forward was rewarded for his hard work and dedication as he was crowned the best player of the tournament with The Golden Shoe. On the anniversary of the Copa America, Sanchez led the team to their second-ever title in two years.

The 32-year-old is the country’s all-time leading goal scorer with 45 goals. He also has 39 assists in his 136 caps. The question now is will Sanchez be able to reproduce his from Copa America five years ago? The World Cup qualifying match is on June 3rd against Argentina. Will the most coveted Chilean forward use this as an inspiration to forget his dismal display in the 2019 edition of the continental cup. Chile will then host Bolivia in the qualifying round before taking on Argentina once again in the group stage matches of the Copa America 2021. Argentina will be looking for redemption. Does Sanchez and co. still, have the engine to stand up against Lionel Messi’s Argentina?