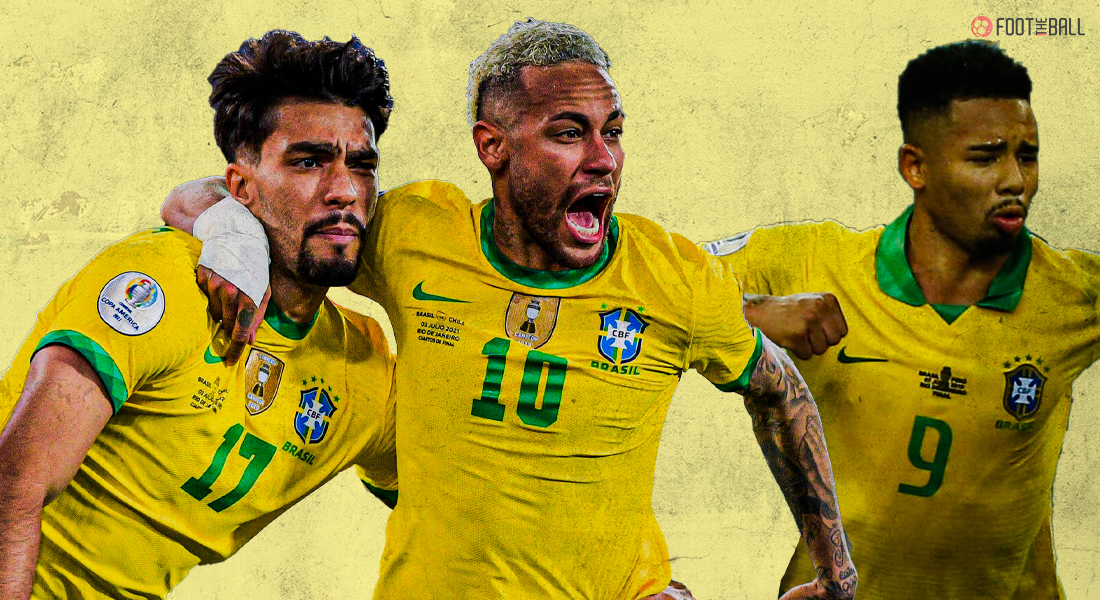 Brazil were made to sweat for a spot in the semifinals by a determined Chile side. The defending champions dug deep and came away with a win after being reduced to 10-men after a Gabriel Jesus’ red card. Lucas Paqueta’s goal early in the second half was enough to set up a meeting with Peru in the semis. The Selecao put a defensive masterclass in the second half to protect their lead.

After a goal frenzy game between Paraguay and Peru, the first half at the Estadio Nilton Santos came as the perfect antidote. It was a dull affair with very little action marked by very few chances here and there. Chile were surprisingly the better side as Brazil looked jaded in front of the goal.

However, the second half more than made up for the action lost earlier. Lucas Paqueta who just came off the bench scored in under a minute. Gabriel Jesus was sent off shortly for a horrible raised boot on Eugenio Mena. Chile saw this as their chance and kept knocking on Brazil’s door for an equalizer. The Brazilian defence stood firm to book a meeting with Peru in the semis. This game would serve as a repeat of the 2019 Copa America finals.

Brazil entered the game as outright favorites against Chile. Such was Selecao’s dominance. They won three games consecutively to seal the top spot in their group B before drawing with Ecuador on the final matchday. Chile on the other hand labored for a knockout spot. They only beat minnows Bolivia and were fortunate to draw against Uruguay and Argentina.

It was Martin Lasarte’s Chile that had a better start to the game than Brazil. Surprisingly they out-possessed the defending champions and created better chances. Though they didn’t test Ederson in goal essentially chile looked the dominant side. Neymar Jr was pulling the strings again and was involved in some action for Brazil. Roberto Firmino volleyed wide in what was their only clear chance of the half.

Tite turned to his bench at half-time to shake things up. Roberto Firmino who was deployed as a number 10 behind Neymar Jr failed to flatter. The Liverpool forward had a few sloppy touches and passes. He had one chance to put them ahead but didn’t take it well. Tite knew he had other match winners on the bench and opted to roll his dice.

It worked wonders as Lucas Paqueta scored within a minute of the kickoff in the second half. The Olympique Lyon midfielder enjoyed a superb season after a disappointing spell with Milan. It was only a matter of time before he showed it in Brazil’s famous yellow kit. The 23-year-old exchanged passes with Neymar on the edge of the box. The ball kindly broke for him in the Chilean box and he took the chance to bury it past Claudio Bravo. Tite got it right again. Paqueta who has an incredible work-rate helped Brazil tirelessly to defend their lead.

Gabriel Jesus is known for being incredibly naughty for the Brazil national team. He was sent off in the 2019 Copa America final against Peru after two silly yellow cards. He was a relieved man as Brazil won the game 3-1. Fast forward two years Jesus hasn’t learned anything as he let his actions hurt the team again.

Brazil had a better start to the second half and just scored through Paqueta. They should’ve taken care of the game in a better way. Instead, Jesus went flying onto Mena trying to win a challenge. The Manchester City striker raised his boot awfully high and caught Mena in the face. The referee Patricio Loustau had no other option but to show him a straight red. It made the task much harder for Brazil. But these are the things that make or break the champions right?

Whenever we think of Brazil a barrage of silky flicks and tricks and goals flash to our minds. What doesn’t meet our mind is how solid their defence has been over the years. The Brazilians flair overshadows their defensive resilience. But tonight their defence has shown them how they contribute to the team’s success equally. Ederson Moraes made a save in the first half to keep the score level at 0-0.

Brazil have two of the most experienced centre-backs in the world at the heart of their defence. A Champions League winning Thiago Silva starts alongside PSG’s rock at the back Marquinhos. They are well completed by full-backs equally proficient in attacking and defending. Renan Lodi and Danilo were entrusted with those roles tonight. Together they stood firm to protect Brazil’s slender one-goal lead despite being down to 10 men. The Chileans came close on a few occasions but they had to bow down to a defensive masterclass from Brazil.

Before Copa America kicked off not many knew about Ben Brereton. Only die-hard Championship followers would recognize that name and know the 22-year-old’s potential. The Englishman took a huge decision by shifting his allegiance to Chile despite his English links. It was a move to play for his national team regularly.

He was called up by the La Roja for their Copa America campaign. He can be said as one of their shining lights in an otherwise disappointing campaign. Brereton scored his first-ever goal for Chile in their only win of the tournament. He then set up Eduardo Vargas for their opener against Uruguay. The mercurial winger was surprisingly dropped to the bench tonight. When he was summoned off the bench he came incredibly close to scoring. Brereton hit the crossbar with a looping header and was unlucky. His fairytale tournament ended with that missed chance.

Who else but him. When Neymar Jr dons the Brazilian kit he’s just unstoppable. The Paris Saint Germain star winger is a treat to watch any day. He has flair and swagger matched by none. Ability wise he’s up there with the best in the world. Tonight even without registering a single goal Neymar can be said as the star of the show for Selecao.

Neymar was deployed as a sole forward in tonight’s game. He dropped in deep to create few chances in the first half. Neymar played a key role in setting up Paqueta’s opener. He was the one who initiated the one-two that bamboozled the Chilean defence.

As they were reduced to 10 men, Neymar became Brazil’s only attacking outlet in the second half. Despite all the odds he was the one who had the biggest chance of the game. Claudio Bravo did wonderfully to deny Neymar as he rushed off his line. Neymar was running up and down the pitch tirelessly to attack Chile’s goal every single time. Having missed their 2019 triumph, he’s out to win the trophy again this time