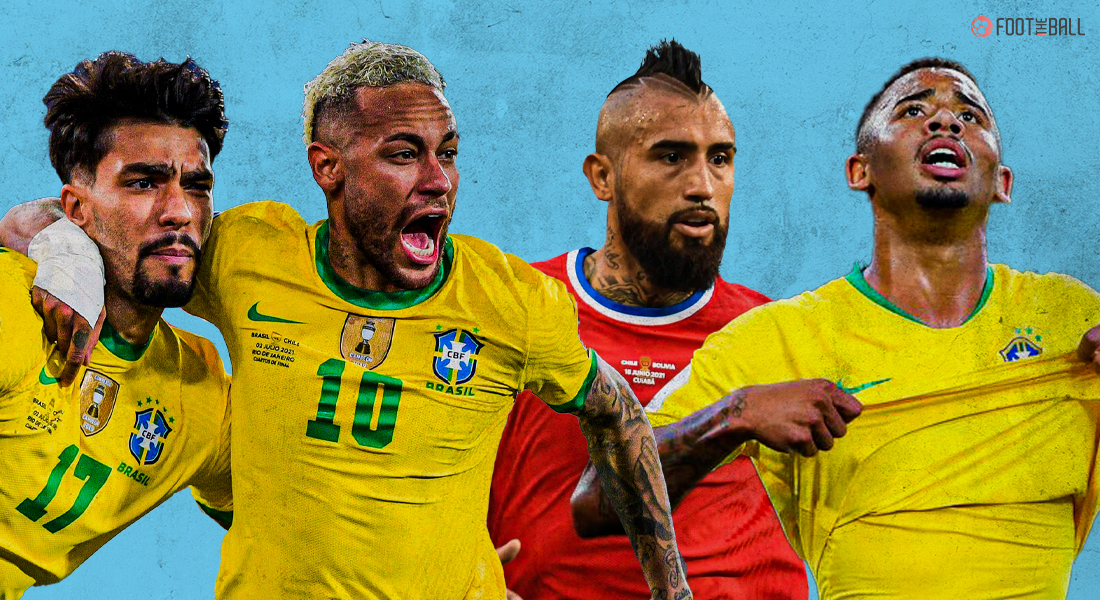 The quarter-finals of Copa America 2021 was underway with an intense matchup between Peru and Paraguay. A match that ended in a brutal penalty shootout that featured six goals and two red cards. Brazil and Chile locked horns just minutes later in what was yet another anticipated fixture. Brazil found a lone goal that takes them through to the semi-finals past a lacklustre Chile side. The game ended with Brazil 1-0 Chile.

There were key changes to either team in their shape and set-up. Brazil set-up in a 4-2-3-1 formation in which their no.10 Neymar took on a more central role than his previous appearance. Richarlison switched to the left-side instead while Roberto Firmino played behind Neymar in the attacking midfield role. Chile welcomed Alexis Sanchez back into the side and deployed their star man as one of two strikers in the 5-3-2 formation they played in.

The first half did not feature a goal and remained less interesting than expected. Chile surprisingly controlled the ball more in the half but did not create any significant chances in the game. They had limited chances on goal in the half but forced a save or two from Ederson in goal. A crisp counter-attack midway through the half resulted in a shot by Vargas from a very tight angle, one that Ederson got down to save.

Brazil did not click into gear in the first half but did create chances that could have ended in the back of the net. Richarlison, Firmino and Jesus all had good chances that should have been buried. Neymar was particularly good in the half, creating excellent opportunities. Firmino was having a poor 45mins  and it was no surprise that he was substituted right after the break.

Lucas Paqueta was sent on in place of Roberto Firmino in the second half. And just within a minute, the substitute made his presence known with a goal for Brazil. Paqueta’s give and go with Neymar led the player with space and time in the middle to slot the ball past Bravo in goal. Brazil deservedly took the lead against Chile as the second-half kicked off.

However, unlike the other quarter-final game, this one did not feature many significant moments in the game. That soon changed as Gabriel Jesus had a loco moment when he went in boot first into Mena’s head close to the side-line in the middle of the park. An unnecessary and reckless challenge that was undoubtedly a red card. Jesus was sent off just three minutes into the second half, giving Chile plenty of time to use the man advantage to spring a comeback.

Chile was given the upper hand when Jesus was handed the red card early on in the first half. There was no surprise in the possession stats as Chile had the extra-man to dominate the ball. Brazil was mostly pinned in their box as Chile threw waves of pressure in hopes to find the equaliser. However, despite their best efforts, they were unable to beat Ederson in goal.

Brazil’s capabilities when they did get the ball was exceptional. Whenever the deep Brazilian defence won the ball back, they fed it to the excellent Neymar who usually carried it all the way till the by-line. His footwork was once again scintillating with the Chile player’s unable to pinch the ball off him in 1v1 situations. The PSG attacker did his best to carry the ball higher up the field and won numerous free-kicks to help his team in the attacking third, relieving pressure in the back.

Although Brazil was a man down, their quality on the ball was much better than what Chile had to offer. The visitors were unable to take advantage of the man advantage and most of their attacks were usually absorbed by the capable Brazilian defence.

Despite being a man down and despite lacking possession, Brazil was the better team. Chile was unable to produce any quality chances when they had the ball and usually resorted to hopeful crosses from either side. They lacked a creative touch in midfield and failed to open up the well-drilled Brazilian defence.

Brazil had too many bodies in the box whenever Chile had the ball and there was a lack of conviction on the part of the visitors. They put up a much better performance than they did in the loss against Paraguay in the final group game but were not good enough to go through to the semi-final. A lacklustre performance from a side that has the capability to challenge the big guns.