THE GLOVES OF GOLD 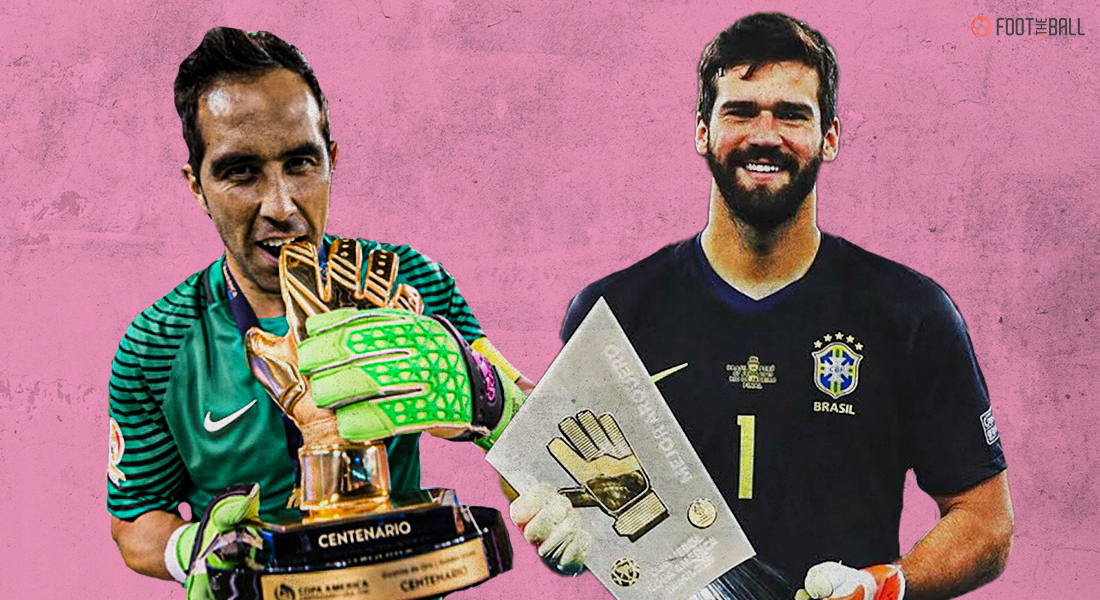 Goalkeeping is one of the most important facets of the beautiful game, although often under appreciated. The job of a goalkeeper goes way beyond shot stopping, a modern day goalkeeper is expected to be on his toes ready to sweep any danger in a high press, to distribute the ball accurately to kickstart attacking transitions from defence and to save the team in clutch moments.

The Golden Glove award is given to the Best Goalkeeper in the tournament. The Copa America inducted this honour to their list of individual awards since the 2011 edition and it has till now been awarded to three players.

Paraguay’s run in the Copa America 2011 was probably the most shocking cup run in the tournament’s history as they reached the final without winning a single game. Drawing all three of their group matches, Paraguay qualified for the knockout stages on the basis of the best third-placed team principle.

They faced the fierce Brazil in the quarterfinals but the game ended a stalemate, all credit to Justo Villar as he made save after save to keep Brazil at bay in 120 minutes. Paraguay went through, thanks to another crucial save from captain Justo Villar in the penalty shootout.

In the semifinals, Justo Villar kept another clean sheet, against Venezuela this time as it ended 0-0 again. Another crucial save from Justo Villar as Paraguay scored all five in the penalty shootout meant Paraguay had the opportunity to go on and win their third Copa America trophy.

Uruguay scored three past the in-form Villar in the final to hand Paraguay their first defeat in the tournament. Villar acknowledged the contrast in squad quality and congratulated the winners as he himself won the Golden Glove award for keeping three clean sheets in total six games played.

Chile hosted the 2015 Copa America and were eventually crowned the champions after defeating Argentina in a hard fought final. This would be Chile’s first ever Copa America trophy in the history of the competition.

Much credit goes to their captain and legend Claudio Bravo for his outstanding performance throughout the journey, keeping 4 clean sheets in 6 matches, including the final.

Bravo was rock-solid at the back as Chile remained undefeated in the competition and conceded only 4 goals. 3 of them came in their draw against Mexico in the group stage, down to defensive errors more than anything.

Bravo led his team from the back, creating attacks with his acute distribution and backing up his defence by sweeping out any danger to the goal.Despite having a brilliant overall tournament, Bravo’s most significant contribution came in the final as Chile held the much feared Argentina attack to a 0-0 draw. Bravo saved Ever Banega’s penalty in the shootout which gave his compatriot Alexis Sanchez the opportunity to score the winner.

The Copa America Centenario held in 2016 to mark hundred years on the competition. Chile participated as the reigning champions of South America and dreamed to defend it in the USA this time.

After losing their first match in the tournament against Argentina, Chile bounced back and went on an unbeaten run, including the 7-0 thrashing of Mexico in the quarterfinals. The Chileans led by goalkeeper Claudio Bravo marched on to the finals and got the opportunity to repeat previous year’s feat by defeating Argentina.

Bravo put in a Man of the Match performance making 4 saves in the goalless draw before stopping the crucial Biglia penalty, making Francisco Silva’s penalty the winner for Chile. Claudio Bravo once again lifted the Golden Glove for being the best goalkeeper in the tournament.

Alisson had a dream 2018/19 season as he won the Golden Glove in both the English Premier League as well as the Champions League playing for Liverpool. In the summer of 2019, Brazil hosted the Copa America and Alisson had the chance to complete his set and become the first goalkeeper to win 3 golden glove awards in a single season.

Alisson kept 5 out of 5 clean sheets as Brazil made the finals of the tournament.

Alisson Becker has become the first goalkeeper to win three Golden Gloves in a single season! 🤯

The stage was set for the hosts to secure their 9th Copa America trophy. Alisson’s fort was finally breached by a Paolo Guerrero penalty to equalise for Peru right before half time. Brazil scored minutes later and then again in the second half to seal the fate of the final in their favour.Alisson was voted the best goalkeeper and he indeed created history by winning his 3rd golden glove of the season.