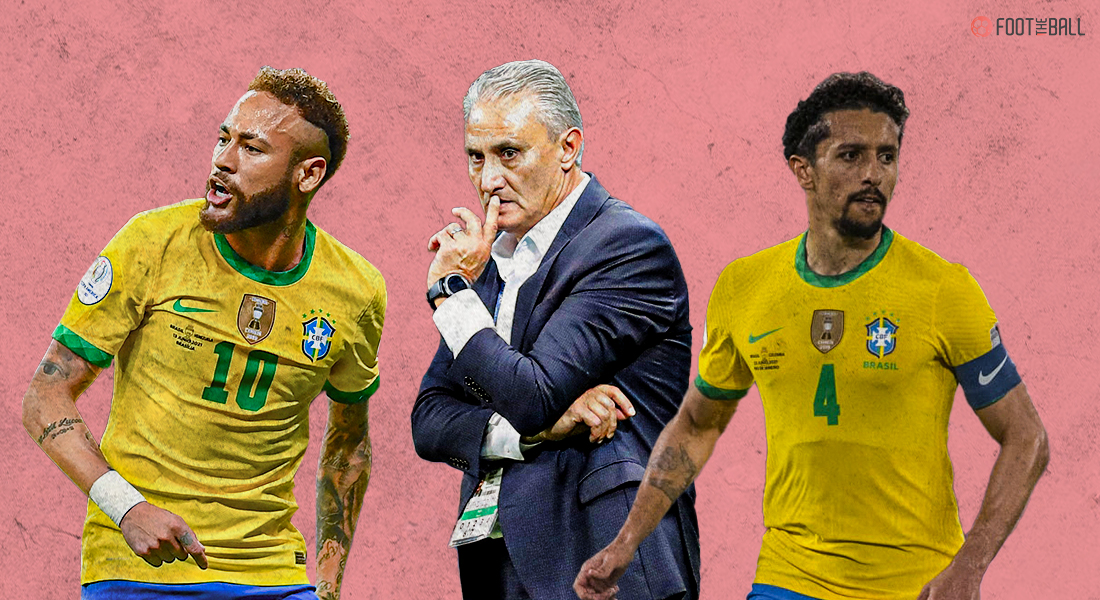 The two heavyweights of the tournament are about to battle for glory as Brazil and Argentina meet in the Copa America 21 final. Argentina are yet to win the prestigious tournament in the past 2 decades and hence are going to go all out on the pitch. Brazil on the other hand are the defending champions and would surely fancy their chances this time around.

Both sides have had a similar showing in the tournament so far which makes this game an extremely tight affair. Both sides are evenly matched on paper and have been in similar form so far. But the question is, how can Brazil go the extra mile and kill Argentinian dreams on 10th July. FootTheBall brings you, how can Brazil get the better of Argentina in the Copa America 21 final.

Brazil’s whole game revolves around the central half of the pitch. They have had the majority of possession in most of the games so far and its impact can be clearly seen in the final scoresheets.

What makes the click is not just their work on the ball around the edge of the box. It is the quick transitions they make in the final third. Brazil is one of the most tactically sound outfits in the world right now and it shows that Tite has worked extremely hard on the drawing board.

They utilise the half-spaces really well due to the number of players available in the midfield. They play 5 guys in the central half of the pitch which helps them cover the whole width of the pitch by the halfway line. This makes them extremely unpredictable since any one of those players can make darting runs through the heart of their defence.

Argentina are going to have a hard time judging their play since decoy runs are also a major part of Brazil’s game plan. If the defenders try and commit too much, they might end up leaving huge gaps in the backline and the Brazilian forwards won’t shy away from exploiting those mistakes.

LUCAS PAQUETA STEPPING UP TO THE CHALLENGE

The player who has had the most impact on Brazil’s game in the knockout stages of this year’s Copa America is in fact not Neymar, but a youngster who plays for Lyon in France. Lucas Paqueta’s transfer value has skyrocketed due to his exceptional performance for Brazil Copa America 21.

He plays as the central attacking midfielder, but since Brazil only plays one man up front, Paqueta acts as the secondary striker for his side. He has only had 2 appearances for them so far but he hasn’t disappointed. He has scored 2 goals already and could have scored a lot more if luck would have been on his side.

His positioning is what makes him special as he manages to find space right in front of goal. As we have discussed, Brazil likes to attack in numbers, which sits perfectly for Paqueta to make his runs unnoticed. Brazil tend to get the ball on the wings and then make a cutting short pass into the box to find Lucas Paqueta. We feel Lucas Paqueta is going to do the most damage to the Argentinian backline.

KEEPING MESSI IN CHECK THROUGHOUT THE 90

Although we don’t like to admit it, Argentina would have surely not made it so far in the tournament if it wasn’t for Lionel Messi. He is the sole playmaker for his side and nearly all goals scored by the Argentinians have had a direct involvement of Lionel Messi.

It seems like if Brazil somehow doesn’t let the Barcelona skipper unleash his full potential, Argentina would look extremely blunt in the final third. Brazil has only conceded once throughout Copa America 2021, which clearly shows how confident their backline would be heading up to the match.

Casemiro and Fred play as the central defensive midfielders for their side and have made the lives of their defenders a lot easier. We feel their major priority throughout the game would be stopping Messi from working his magic and if Brazil succeeds in doing that, their chances of lifting the trophy would go sky-high.

If Messi is not given a lot of space, he would be isolated from their link-up play and that can completely turn the result around. Overall Brazil are better than their counterpart statistically and are more than capable of winning Copa America 21.