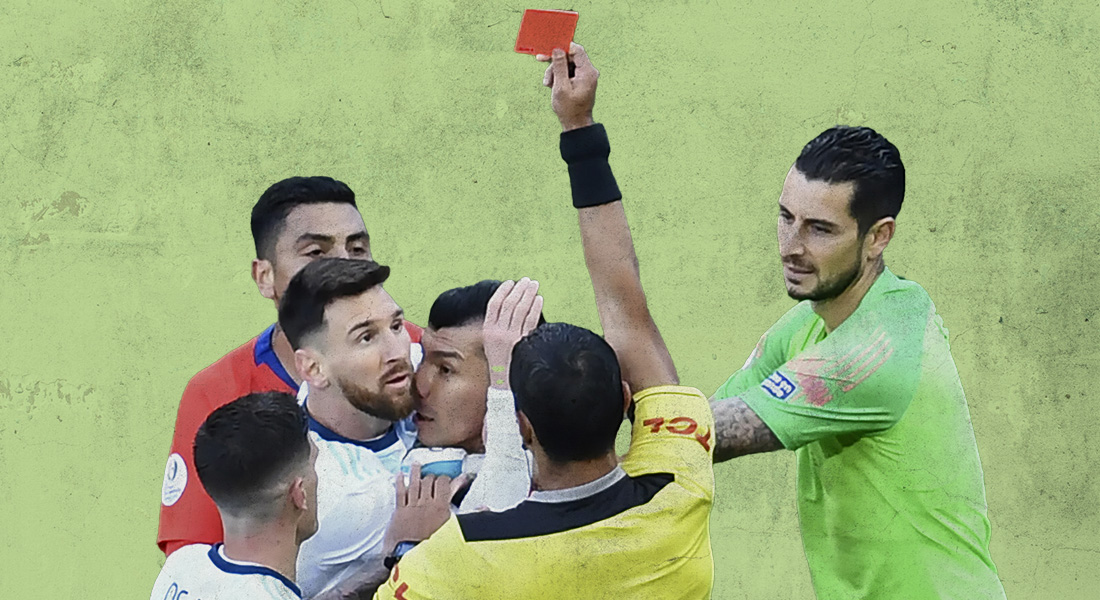 Latin Americans are know for their passion and outright emotional expression. Specially in football the fans, players and managers all get supremely involved in the games, which actually makes the Copa America more entertaining.

Due to these emotions a lot of controversies and speculation have popped surrounding the tournament over the years, let’s check some out:

Argentina’s exit to Brazil and the role VAR played

La Albiceleste was robbed of victory or at least a chance of it when two penalty claims were denied in the 2019 Copa America semi-final against Brazil. Messi and co. went on to question the refereeing decisions post-match and was disgusted by the poor resolution of the referee. Messi also suggested that the CONMEBOL is controlled by Brazil and further inquiries need to be taken to stave off similar situations in the future.

The decisions in themselves could not have posed a problem in the match, rather it was the use of VAR that posed the rumpus. In the first situation, Aguero seemed to have run into Dani Alves when pursuing a pass by Lionel Messi. Though this seemed to be a clash of bodies at first glance, different angles and camera perspectives show that the case may have very well been different. Then again, with constant change in the rule books, no one can be sure anymore, perhaps not even the referees themselves.

The second incident seemed much more of a penalty than the first when Nicolas Otamendi’s left-wing run was checked by Arthur’s shoulder. The heavy contact was waived off by the referee and the play continued. The baffling part, at least to the Argentinian players and fans was that the decision was not even checked by VAR. Is Messi right about the state of Copa America? Does it truly need a revamp?

The 2019 Copa America was ridiculed with controversies, and Messi’s red card in the third-place playoff is right up there. Chilean midfielder Gary Medel and Lionel Messi started bumping into each other after a dispute broke out on Messi’s challenge on Medel. The referee immediately moved to the scene and dismissed both players. The commotion then intensified when players from both teams started protesting the decision. Argentina went on to win the match 2-1 and claim the 3rd position in the tournament.

Messi showed further dissent as he refused to go and collect his bronze medal. He lashed out against the officials and claimed the tournament was corrupt. After the match, he also exclaimed that Brazil would likely win the finals as it was already set out for them to do so! When asked if he wasn’t concerned about the repercussions of his words, he simply said that someone had to speak the truth. Messi was later fined and given a ban.

Brazil’s early exit courtesy of a late goal by Peru

Brazil was shocked to find itself out of the 2016 Copa America, failing to even make it past the group stage. Even a draw against Peru would have taken them to the quarter-finals, but an infuriating decision by the referees saw the five-time World Champions bow out in shame.

Brazil exit the #CopaAmerica at the group stage for the first time in 29 years, after losing 1-0 to Peru. pic.twitter.com/37V4BHQgan

Uruguayan referee Andres Cunha whistled for a goal when Raul Ruidiaz seemed to have used his arm to nudge the ball into Brazil’s goal. The Brazilian superstars stormed the referee and the frantic official weighed his options after consulting with the 4th official only to let the goal stand. Would VAR have been useful here?

The Copa America is one of the largest sporting events in the world amassing viewers in the billions. The Commercial rights for the tournament that was sold at just 1.7 million in 1987 are worth more than 100 million now. Traffic Sports, the company that had exclusive rights to the tournament was accused to have bribed the officials to keep the rights of the tournament that profited them in millions to themselves, according to the US Attorney. The Attorney also revealed that the officials in CONMEBOL were receiving figures greater than six figures to keep the rights in the company’s hands while warding off any speculation. Just like UEFA and FIFA, the CONMEBOL also needs to be investigated further and decisive actions need to be undertaken to free the sport of corruption.

The Tournament that Shouldn’t have been!

Dismayed by scandals, the 2016 Copa America Centenario held in the USA was bound to have never happened. The foray of arrests of top officials in FIFA, UEFA and CONMEBOL put the competition in limbo. Even the hosts for the tournament which are usually assigned at least years in advance was only confirmed six months before the tournament. Despite the lack of preparation, the competition progressed smoothly. It became the highest attended Copa America since its inception, a whopping 1.5 million people in attendance.

The trophy that wasn’t unveiled

Estadio Nacional in Santiago was all set to unveil the new trophy of the Copa America on 4th July 2015 on the final match of the tournament. Hosts Chile took on Argentina in the finals that ended in a goalless draw. The hosts defeated the Argentinians to win their first-ever title in the competition, yet, the significance of the victory was cast down after the speculation over the new trophy unveiling was sprouted.

When you win your first Copa America title EVER … pic.twitter.com/SSAzbDtEzE

Amidst corruption scandals, world football was going through a rough patch and this tournament was also a scapegoat of its effects.

Zero Wins – Road to the Final

Paraguay may well go down in history as the only team to reach the final of the tournament, perhaps any tournament, without securing a win in either 90 or 120 minutes of play. In the 2011 Copa America, Paraguay managed to draw all three of their group-stage matches, despite gaining the advantage in 2 of them only to throw it away in the final moments of both matches. Fate rescued the team in the form of a controversial best third-placed team format that pushed them through to the quarter-finals.

The next challenge was the almighty Brazil against whom they held their ground for the entirety of the match. The 90 minutes ended goallessly and Paraguay won in a penalty shootout. The Semi-finals saw the same scoreline, only this time it was 120minutes. Once again Paraguay won the penalty shootout and placed themselves in the final. Their testament of fate was soon over when Uruguay outclassed them in every department to send their opposition home with only the Runners up medal. Not a single win, yet a medal to hang on to.

Copa America is notorious for its poor logistics and state of stadiums. Every competition has reported teams registering complaints on the poor conditions of the training facilities as well as the Stadiums where the matches are held.

To further the fume, one of the worlds biggest tournaments has the worst logistical planning possible. Matches have been postponed due to traffic and many teams have been annoyed with the hotel facilities provided, that were too far from the training facility and stadiums they were to compete in. The CONMEBOL needs to sort its feet quickly or things might just take a turn for the worst.

For a while now the CONMEBOL officials have been questioned on the absence of extra time in the quarter-finals. Unlike the semi-finals or the finals, the quarter-finals do not feature extra time. Instead, if the match ends in a draw after the 90minutes stipulated, a penalty shootout is deemed.

This has helped teams that focus on a defensive play or even teams regarded as underdogs to play out the 90 minutes to decide the match in penalties. Many coaches and players have called out this bizarre rule, stating that if the semi-finals and finals possess the same format, why is the quarter-finals any different?

The Foreign Nations At The Copa America

Copa America has long carried out the tradition of inviting foreign countries outside the continent to participate in the tournament to fit their 12-team structure. Costa Rica, Haiti, Honduras, Jamaica, Japan, Mexico, Panama and United States were the foreign teams that took part in the competition.

Some pundits and other officials have deemed this tradition as a violation of the very essence of a continental tournament. There were also many vindications regarding the teams that participated in the tournament s well. Japan was accused of dissent when it fielded it’s under 23’s team in the tournament. Various countries within the tournament have also despised this system. Although no invitee has won the tournament, Mexico has reached the finals more than once and threatened to take the trophy outside the continent.