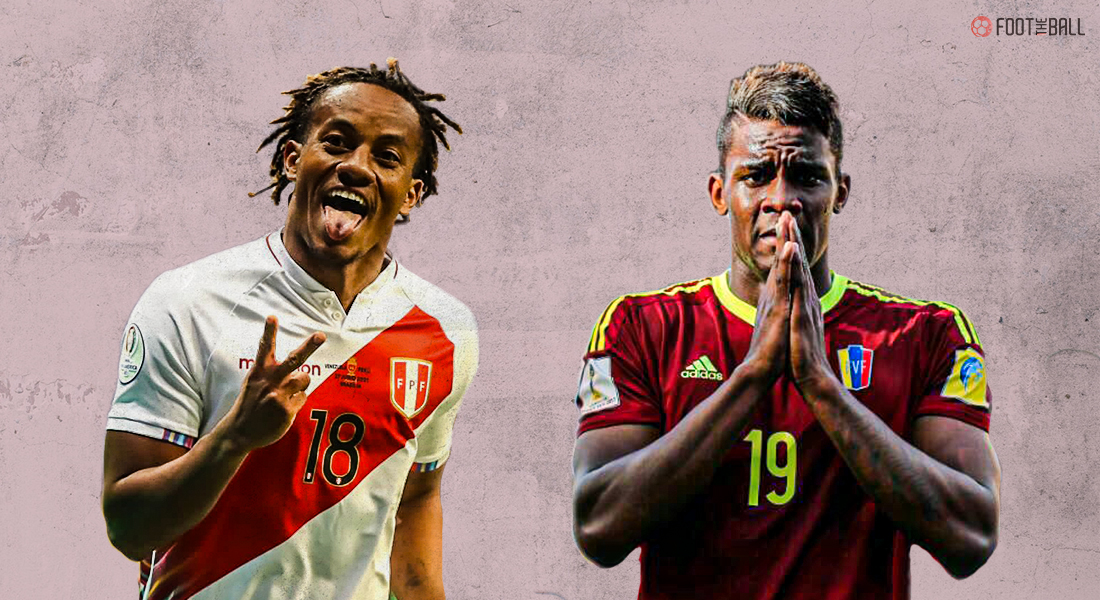 Peru scraped past Venezuela in the last matchday of Copa America 2021. Andre Carrillo’s goal soon after the restart was enough to settle the tie.

Venezuela desperately needed a draw to have a chance of qualifying for the knockout rounds of Copa America, whereas Peru had already booked their place in the last 8.

The result of the game between Brazil and Ecuador also would have had an effect on Venezuela’s chances. Especially if they had managed to get a draw against Peru.

A corner from Peru that Venezuela failed to deal with in the 48th minute. It led to Carrillo ditching his marker to get to the loose ball  just 5 yards from the goal. He then smashed the ball in  for the only goal of the dull affair.

Here are 3 main takeaways from the Copa America 2021 tie between Venezuela and Peru.

The Peruvians looked to press the deep sitting defence of Venezuela from the first whistle. They made it really hard for the Venezuelans to play out from the back, often trapping them in their own half. The constant high press proved effective as Peru kept winning the ball near Venezuela’s goal. But they failed to convert any of them in the first half.

In fact the Venezuelans looked dangerous in Peru’s half. They were able to carve out more viable chances that made the Peru goalkeeper, Gallese work harder than Farinez in the first half.

Peru were surely crying out for a wake up call. It seemed it was going to be a night of Peru being wasteful while Venezuela were likely to nick a lucky goal.

Fortunately for Peru things changed in the second half. It was also clear to see that both teams wanted to make sure they did not concede.

VENEZUELA SLEEPING AFTER THE RESTART

Fans must have wondered if we were going to see a goal or not in this game as the team’s pragmatic approach resulted in a boring first half.

The second half started way differently. Peru looked effective as they wanted their high press to yield the result against Venezuela.

Peru won a corner in the 48th minute that led to the goal. But the Venezuelan defence was apparently sleeping. The players from Venezuela were clearly caught on their heels as Carrillo was afforded so much space right in the center of the goal. He was calmly able to thrash the ball into an almost open net as the Venezuelans failed to react altogether.

After the goal the Venezuelan players looked at each other absolutely befuddled as to how Andre Carrillo was given so much time and space in their penalty box.

The players from Venezuela were clearly still in the locker room as the words of their manager would have been ringing in their ears. It probably was too loud as Peru capitalized with ease.

VENEZUELA OUT SADLY BUT OBVIOUSLY

The Venezuelans could feel a little hard done by their run in this year’s Copa America. They started their Copa campaign with a massively depleted squad due to COVID.

They had lost a lot of their star player for the tournament due to COVID,players like Yeferson Soteldo, who returned to the field for this game after fully recovering. But he was the only one who was able to register some playing time at Copa 2021, as many of those infected could only watch from their homes.

A sad but obvious conclusion for this Venezuelan squad who will hope that all of their stars return to training soon as Qatar World Cup qualifiers are in full flow.