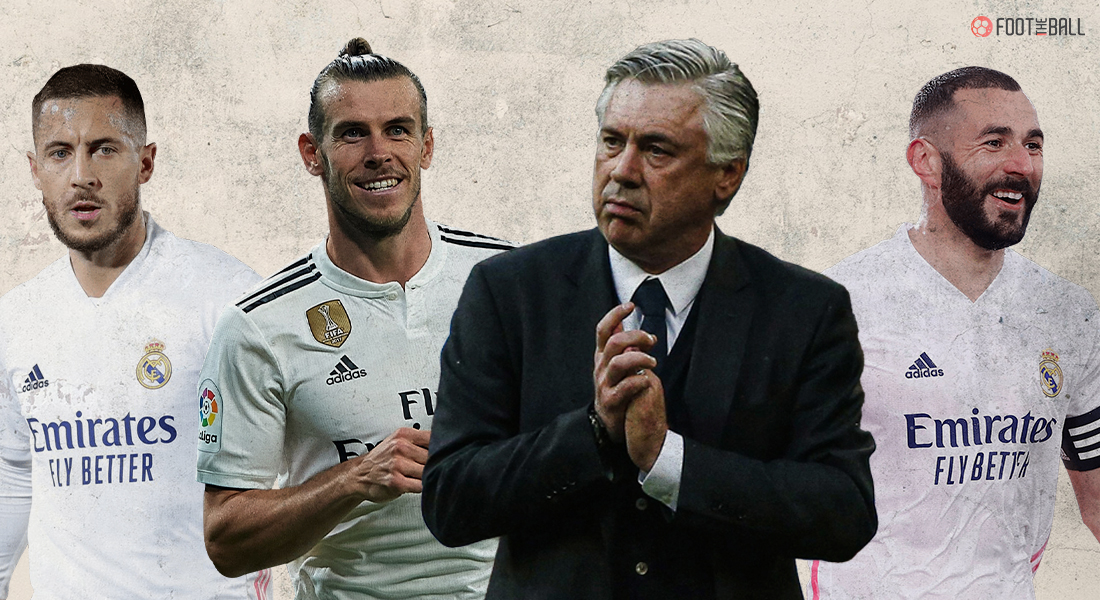 Carlo Ancelotti returns to Madrid again. The Italian tactician who delivered the famed La Decima is back at the Santiago Bernabeu in a completely different setting. Ancelotti can be credited with the creation of the famed BBC that ruled Europe for years. This time he faces the challenging task of assembling another elite trident. Real Madrid have a potential elite front-three on their hands and hopes that Ancelotti would unlock it again.

When Zinedine Zidane left Real Madrid he made his feelings known. The legendary French manager fired few shots at the board. It sounded like a potential warning to whoever was coming next. Madrid turned to Ancelotti instead. He knew how the Los Blancos worked inside out and embraced the challenge to put them back on track.

There’s a vast change in power in both Spain and Europe since Ancelotti has last coached Madrid. Atletico Madrid have challenged Real and Barcelona’s supremacy domestically. Meanwhile, it has been three years since they triumphed in Europe. Ancelotti knows he has to fix a misfiring attack to get the best out of them again. Hence he should transform a potential elite front three into a world-conquering one.

When Ancelotti first arrived at Madrid in 2013 they were feeling the heat in Europe despite being bullish in Spain. An ambitious summer saw them break the bank with signings. One particular signing was of a certain Gareth Bale from Tottenham Hotspurs for a record €91 million then. Bale was the missing piece for Ancelotti’s Madrid. He swayed away from Madrid’s usual 4-2-3-1 formation to a bold 4-3-3.

This gave birth to the first contemporary attacking trio BBC. Gareth Bale who arrived recently was used as the right-winger. A young Karim Benzema was leading the line. He was flanked by the legendary Cristiano Ronaldo who was approaching his peak. The trio terrorized defences in the league and cups. Between them, they scored 97 goals in all competitions.

Despite losing the league to arch-rivals Barcelona they fared well in other competitions. They beat Barcelona in the Copa del Rey finals to avenge their league loss. Bale scored a late winner in that game. Their peak moment was the La Decima. Real Madrid were struck on 9 champions league titles for an eternity. It just took a season’s time for BBC to deliver it. A legendary injury-time header from Sergio Ramos leveled the Champions League finals against local rivals Atletico Madrid. Goals from Bale, Marcelo, and Ronaldo settled the affair and completed the La Decima.

The BBC was disbanded after Ronaldo swapped Real Madrid for Juventus in the summer of 2018. It ended a legendary run after trophy-laden five years. Madrid signed Eden Hazard from Chelsea for around €140 million to fill Ronaldo’s void. Since then, many managers have come and gone but none have succeeded in lifting Madrid’s attack. Madrid have found goals hard to come by in the recent seasons and paid price for it.

Ancelotti himself might be needed to revive the trio culture. He finds a different challenge this time as he goes from C to H. Karim Benzema is the only one fit and firing. The Frenchman has been in the form of his life since Ronaldo left. He is carrying Madrid’s attack singlehandedly. He would love to be the focal point of this front three again.

Gareth Bale is a changed man now. He enjoyed his most successful season in a Madrid shirt back in 2013/2014. If you were wondering it was his and the BBC’s debut season. You can understand how things haven’t clicked since then for him. He was loaned to Tottenham last season to get some minutes before the Euros. Bale rediscovered his form and might be happy to offer his service to Ancelottis’s cause.

Eden Hazard is the newest member of the band. Two seasons into his Madrid career, the Belgian has failed to hit the stride. There have few and far good performances between constant injuries. A solid Euros might be the point of a turnaround for him. Besides Ancelotti is known for bringing the best out of talented players. Having never worked with Hazard earlier he might enjoy coaching and finding the Belgian’s best version.

Benzema was the main source for most of the goals scored by Madrid. They have to move away from this dependency if they are to win trophies again. Ancelotti might trust his star quality and go with a BBH this time.

Considering the age of the players, Madrid have enough resources on the bench to chip in regularly. Marco Asensio is a player who has performed well in the past season. He might make a bold claim for a starting spot. They also have two young Brazilians waiting for their breakthrough. Vinicius Jr and Rodrygo Goes are filled with energy and talent to step up when asked by their boss.

Ancelotti is a mastermind who has taken Madrid to the very top once. He must be licking his lips at the chance to do it again. His coaching skills can elevate any player and it might play a key role in turning Real Madrid and their new front three BBH into a winning machine.