THE EFFECT OF CONTE! 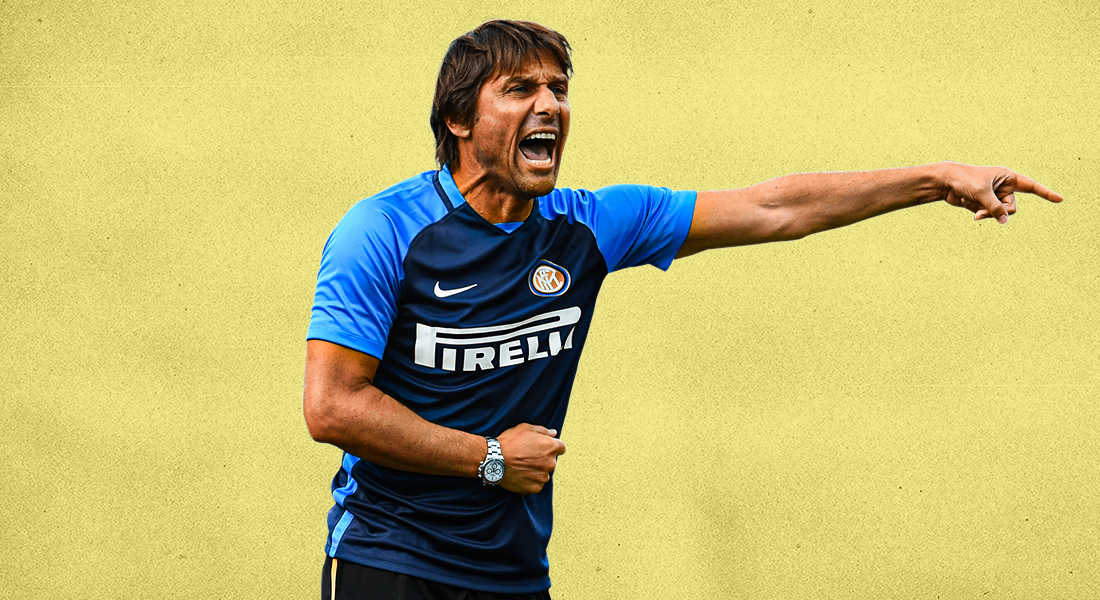 Antonio Conte leaving Internazionale in the wake of the club’s dire financial situation has created tremors all over the European footballing world, and has become one of the major reasons for a rollercoaster ride in the change of managers across the Serie A.

The Italian turned the Nerazzurri into world beaters after finishing second in the league and reaching the Europa League final last season, while going one step ahead and winning the league in 2021, breaking the nine-year monopoly of Juventus.

Although Inter, were linked with Massimiliano Allegri, former Lazio head coach Simone Inzaghi has replaced Conte in the managerial role after Allegri had decided to return to the Old Lady.

Inter as a club, on the whole, is in a mess and we, at FootTheBall, look further into the winners and losers at the club after Conte’s departure.

It is a known fact that Conte demanded the club’s higher officials for another big spend in the summer to sustain the pressure in the league while also going forward in the Champions League next season. The club’s inefficiency in providing those demands to Conte is the reason why the Italian had left the club.

Although, the club and its owners are in major financial troubles primarily due to the Covid-19 pandemic, they can be happy about not having to spend the amount of money that Conte demanded for the next season and use that money to clear their debts.

Also, this summer could see quite a few top stars leaving the club and while it could be a problem for the club on the football side, the fees that the players would bring in might help them in paving into stability on the financial side.

Perhaps the biggest loser will obviously be Conte himself. After his departure from Chelsea in 2018, one year after winning the league title in England, it took another year for Conte to find the job at Inter in 2019. And since joining the capital club, Conte has become a fan-favourite at the San Siro.

Out of all the players he had brought, only Romelu Lukaku cost big money while other signings such as Alexis Sanchez, Ashley Young and Matteo Darmian had to be brought through meagre resources. Lukaku’s resurgence in Italy after an underwhelming season at Manchester United is a testament to his man-management skills. 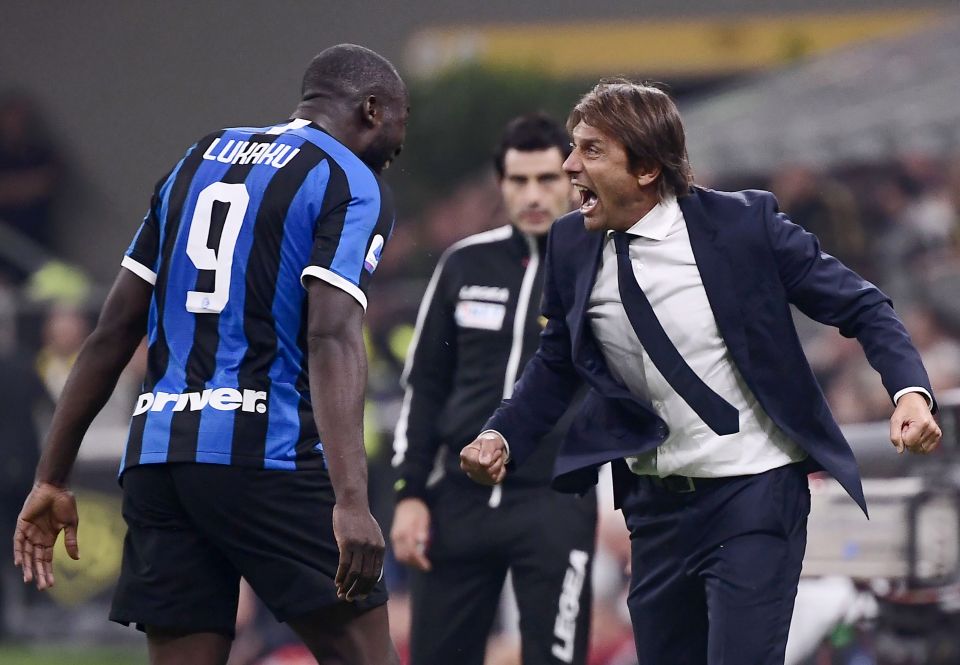 It will take time for him to find another group of players such as those in Inter to work with as there seems to be no correct offer available for the Italian at this moment.

Although being linked to the vacant spots at Juventus and Real Madrid, fellow Italians Massimiliano Allegri and Carlo Ancelotti have been appointed at those clubs respectively leaving Conte to continue his search for a new club.

After his retirement as a player at Lazio, Inzaghi stayed back at the club, managing the youth squads before taking the role of first-team manager in 2016. Since then, Inzaghi has overseen five full campaigns at the club, and has won the Coppa Italia trophy in 2019. 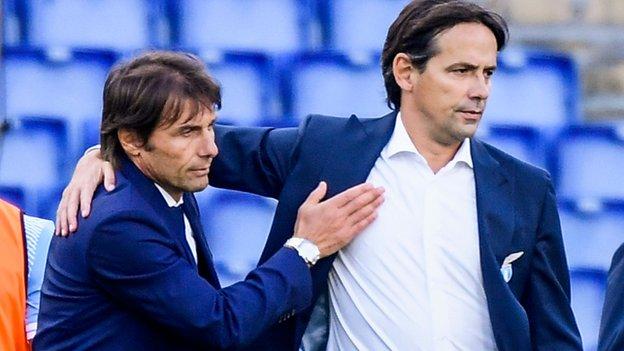 Inzaghi, with Conte after a match between Lazio and Inter. (Image Courtesy: Serie A / Website)

Although, he will be ecstatic to manage one of the three top clubs in Italy, Inzaghi will have to work on meagre resources that are available with the club in order to replace the potentially outgoing superstars such as Lukaku, Lautaro Martinez, Marcelo Brozovic and Milan Skriniar.

The most affected players at Inter after Conte’s departure will the strike duo of Romelu Lukaku and Lautaro Martinez. Inter actually owe a lot to their strikers who are capable of creating goal-scoring opportunities out of nothing and to play for and with the team.

Martinez was inconsistent in his performances until the arrival of Lukaku and the duo helped together in masking their weaknesses and complementing each other at key moments, thanks to the system that Conte has put in place. 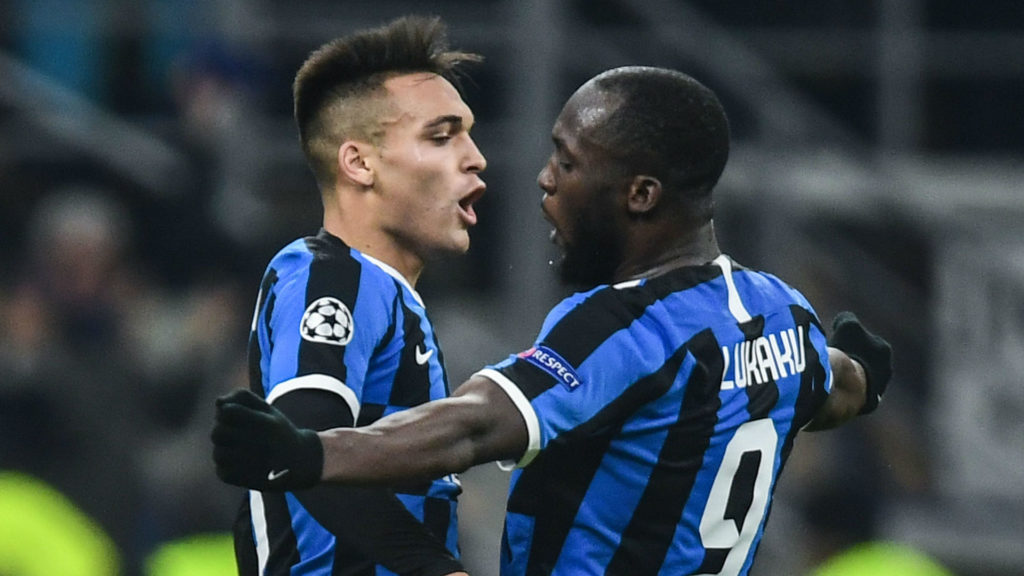 Martinez and Lukaku have been a terrific duo for Inter during the past two seasons. (Image Courtesy: UEFA / Website)

Although Inzaghi too, plays with a two-striker formation, Lukaku’s terrific form in this season has seen him being linked to a move away from Inter while Martinez is also constantly linked to move elsewhere in order to take the next big step in his career.

They might go on to star individually if either of them ever moves, which looks likely as the club needs a to make a minimum of €80 million from player sales, but it is unlikely that they will find another likewise partner for each other in the future.