NINTH IN A ROW 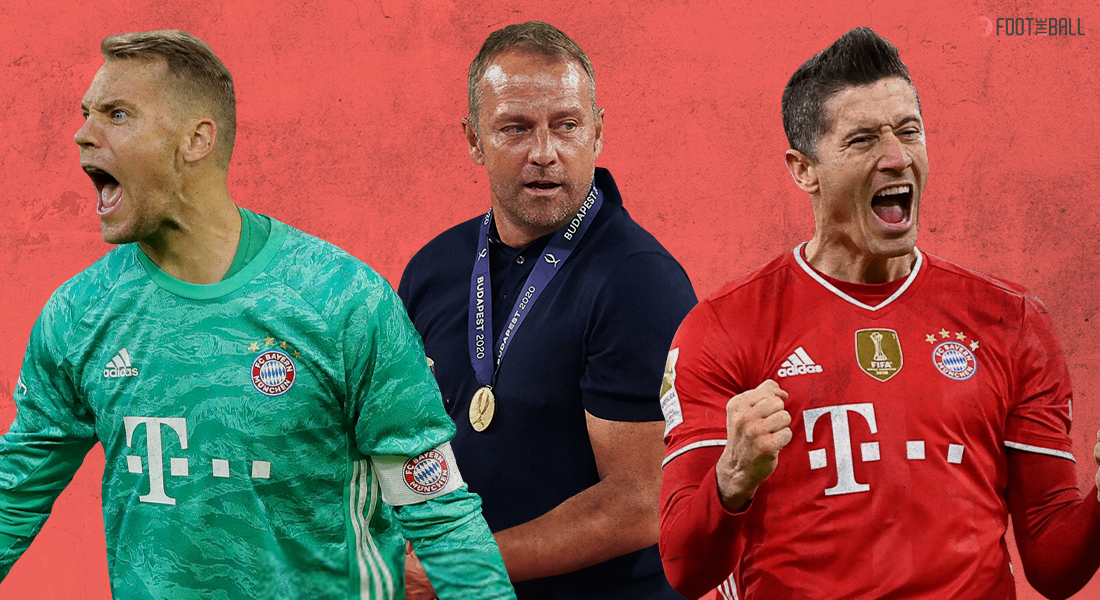 After finishing the 2019-20 season on a high with the treble, Bayern Munich hoped to continue the same form into the 2021 season by defending their crowns, especially the Bundesliga title and the UEFA Champions League.

The summer saw the departure of key players such as Thiago, who left for Liverpool on a €30 million deal, and the return of Philippe Coutinho and Ivan Perisic to their parent clubs after the respective loan deals had ended.

Bayern went ahead and bought in Leroy Sane as the only high-profile deal, for a reported €50 million from Manchester City while also bringing in players such as Bouna Sarr, Marc Roca and Eric Maxin Choupo-Moting to bolster their squad depth.

Although they won the league for a record 9th consecutive time, the season did not go as planned as the Bavarians crashed out very early in the DFL-Pokal and in the quarterfinals of the Champions League. Let’s know more in the season review for Bayern Munich.

Bayern Munich could not have started the season in a better way as they thumped Schalke 8-0 and carried on this momentum to secure their first two titles of the season, the UEFA Super Cup, which they lifted after defeating Sevilla 2-1 in Budapest, and the DFL-Supercup, which was secured with a Joshua Kimmich winner in 82nd minute of the match which ended 3-2 in Bayern’s favour over Dortmund.

The reigning champions lost only four times in the first 39 games in all competitions which included a clean sweep of the Champions League group stage but out of those four losses, one was a humiliating defeat to second tier side Holstein Kiel in the second round of the DFL Cup.

In between this run, Bayern went ahead and secured the FIFA Club World Cup, defeating UNAL in the final. But Robert Lewandowski’s knee injury that occurred a week before the crunch tie against Paris Saint Germain in the quarter was seen as the major factor in Bayern crashing out of the Champions League after losing the tie on away goals as it finished 3-3 on aggregate after the end of the two legs.

You can call us the champions of the world…🎶#MiaSanChampi6ns pic.twitter.com/fDfh1xctud

Although, they lost the chance in defending their continental title, Bayern went ahead to lift their ninth consecutive Bundesliga title in the 32nd game of the season. The title was decided when RB Leipzig had lost to Borussia Dortmund before the man of Bayern, but they went ahead and romped to a 6-0 win against Borussia Monchengladbach.

DFB Pokal – Eliminated in the Second Round

Champions League – Eliminated in the Quarterfinals

Bayern came into the match having already been crowned champions after nearest rivals RB Leipzig lost to Dortmund – a precursor of things to come in the DFB Pokal final. Monchengladbach meanwhile were struggling to keep their European dream alive.

The game against Gladbach was a ceremonial procession, with Lewandowski putting the hosts ahead just in the second minute of the game. 20 minutes later, the ever-present Thomas Muller doubled their lead before Lewandowski’s moment of magic helped the Bavarians race into a 3-0 in 34 minutes.

Bayern went on to extend their lead for the fourth time in the first half when Kinglsey Coman latched onto a ball from his number 9. In the second half, the rout continued as Bayern added another two goals to their tally, including a third one for Lewandowski, which saw him close the Gerd Muller record of scoring 40 goals in a single Bundesliga season.

The Polish striker went on to break it in the last game of the season as Bayern Munich displayed breath-taking football during the end stages of the season.

In perhaps what can be regarded as one of the club’s darkest days in recent history, Bayern went into the match after a first defeat in 21 games, which was a 3-2 reverse to Gladbach in January. It was a chance for Bayern to defend the trophy they had been winning for the past two seasons and the game started as expected.

Serge Gnabry put his side ahead in the 14th minute of the game before Fin Bartels equalised for Kiel in the 37th minute. Shortly after half-time, Leroy Sane went ahead and put Bayern into the lead again and until injury time it looked like the Bavarians were going through to the third round.

But disaster struck when Hauke Wahl scored in the dying moments of stoppage time to send the game into extra-time and subsequently into penalties where Marc Roca missed for the defending champions, crashing them out in the second round.

Similar to last season, Robert Lewandowski has carried this star-studded Bayern Munich squad on his shoulders once again this season with a staggering number of goals and assists for the club. The Polish forward, who scored 55 goals in 47 games last season and had arguably been the best player on the planet, went ahead and replicated the same this year too. 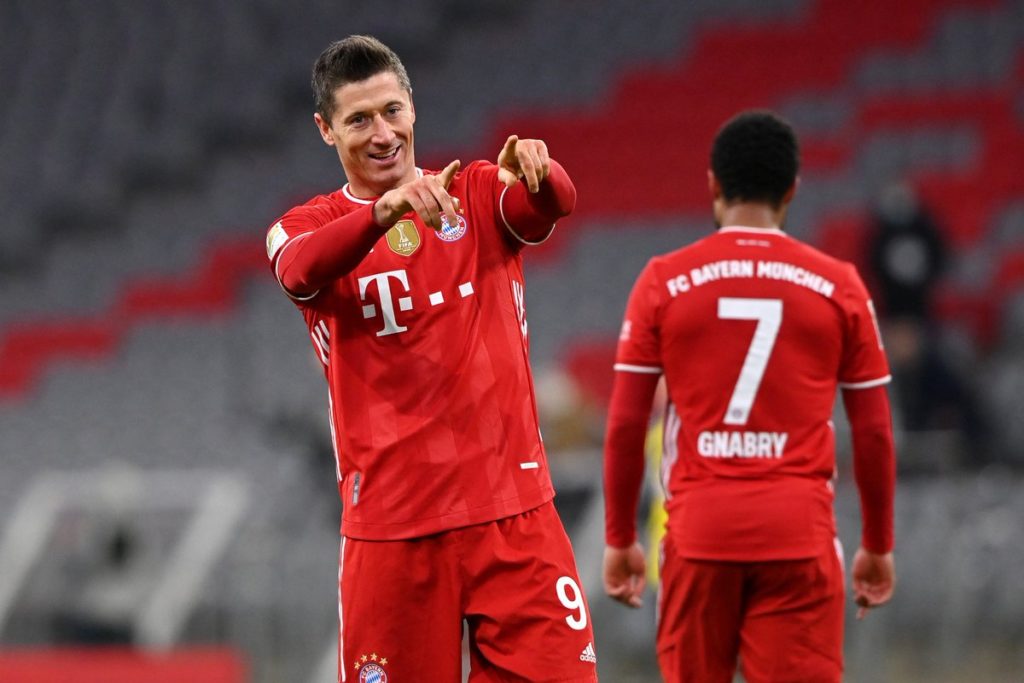 With 48 goals in 41 games, Lewandowski even leads the charts when we look at Europe’s top five leagues and these numbers could have been even higher if not for his untimely knee injury that impacted Bayern’s progress in the Champions League.

Lewandowski also finally succeeded in breaking Gerd Muller’s long-standing record of the highest number of goals scored by an individual in a single Bundesliga campaign. After equalling Muller’s record of 40 in the penultimate game against Freiburg, Lewandowski broke the record in the 90th minute of the last game of the season against Augsburg.

Brought in as the man to elevate the already firing Bayern Munich attack, Leroy Sane has struggled to achieve the same heights as he did during the first three years at Manchester City where he acheived a staggering 39 goals and 41 assists in 133 games in that period after arriving from Schalke in 2016. Leroy Sane’s first season has been underwhelming when compared to his days in England. (Image Courtesy: Bundesliga / Website)

Sane, who should have originally joined Bayern Munich in 2019 if not for the ACL injury that occurred in the Community Shield game, took time to recover to the highest level but the time taken was way longer than what was expected from an international star.

Although, he put up acceptable numbers, the management and fans at Bayern Munich expect a lot more from their star attackers and Sane will hope to rediscover his form and talent which once helped him become one of the fearful wingers in the Premier League.

To conclude, Bayern Munich’s season started off very brightly as expected when the lifted both the Super Cups in the matter of a fortnight but the knee injury that occurred to Robert Lewandowski had a major impact on the Champions League dreams this season.

Julian #Nagelsmann to leave #RBLeipzig at the end of the 2020/21 season.

The 33-year-old will then take on a role as the new head coach of @FCBayernEN as of 1st July 2021. pic.twitter.com/SPx6wWkhGI

The departure of Hansi Flick after two trophy-laden years will be a difficult one to take for the players and the fans alike, but the arrival of Julian Nagelsmann from RB Leipzig, one of the brightest up and coming coaches in European football, will excite not only those associated with the Bavarians but also football fans in general.