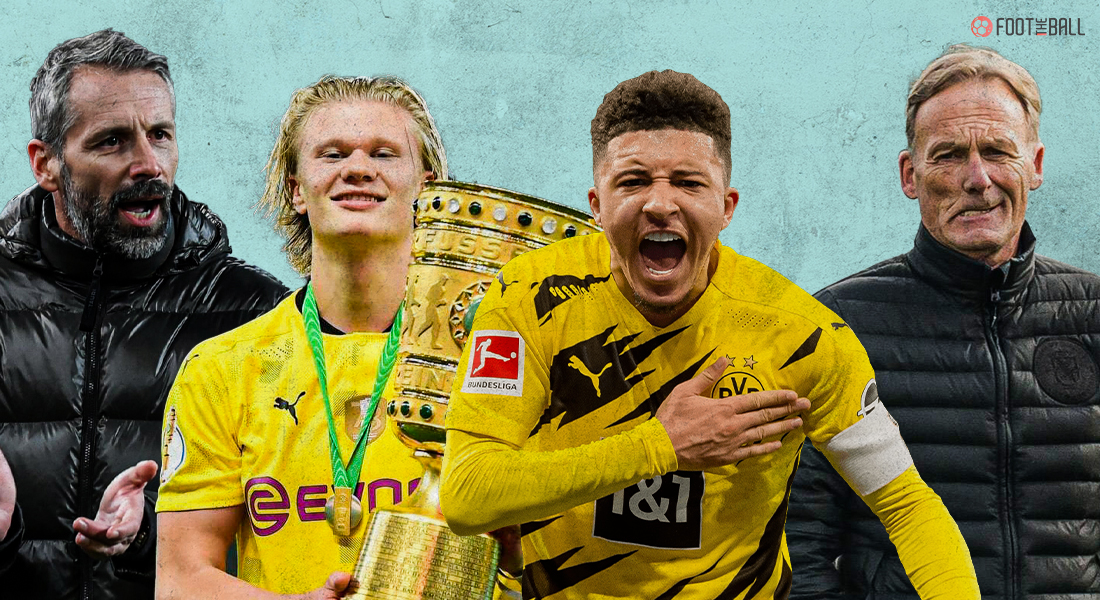 Borussia Dortmund run the club efficiently on and off the pitch. How does the Bundesliga side manage this act with such ease?

Modern-day football is not just about competing for trophies on the pitch. It’s also about running the club efficiently. The concept of money is embedded into the very fabric of football. A club’s success is equally defined by how well it wins on the pitch as well as how smoothly it is run. Borussia Dortmund is a prime example of a perfect club and their buy and sell policy is working wonders on and off the pitch.

THIS IS BORUSSIA DORTMUND! pic.twitter.com/OGJADlsGlv

The pandemic has affected the world of football adversely. It dented many clubs’ finances and made life a living hell. Several top clubs posted millions of losses in the previous quarters. A strong financial system with restraint on spending was needed to escape unscathed from this trouble.

For clubs not backed by oligarchs and billionaire tycoons, survival becomes all the more important. A stable background scene can only help the team thrive on the pitch. Dortmund is paving the way for clubs with lower financial power as it balances its books regularly and uses the money wisely to keep challenging for top honors.

Dortmund are seen as an ideal selling club by many of Europe’s elite. They have owned the title and make jaw-dropping business deals when there is a very small margin for error. The player recruitment has to be on target. The player recruited must help the club in short term on the pitch. In the long term, their value must double/triple by the time they leave.

They’ve made £309m. That’s how you run a football club 🤑 pic.twitter.com/JXReqIAxRn

In the past few years, Dortmund have been using this mantra to succeed. Jurgen Klopp, the current Liverpool manager can be credited with the success of this trick. It was during his time at Dortmund, today’s starplayers like Marco Reus, Robert Lewandowski, and Mario Gotze were developed. Lewandowski and Reus were signed for minimal fess and Gotze made his way through the academy. After a few years, they’d sell the players. In the first crop, a huge profit was made only on Gotze. Klopp left a blueprint for others to follow.

Since then Dortmund have signed the likes of Pierre Emerick-Aubameyang, Ousmane Dembele, Jadon Sancho, and Christian Pulisic for next to nothing. They have successfully sold the players for a high price afterward. Jadon Sancho is the recent player to be sold in this process. Dortmund also have Erling Haaland on their books to raise profits if needed.

IT WORKS ON THE FIELD?

This policy works the best if the club can succeed on the pitch. Dortmund have made sure that they got the right players. Their coaches were able to extract the most out of those promising talents. As a result, Dortmund have impressed on the pitch with their policy.

They enjoyed supreme success under Klopp. Replacing a man of his stature was never easy. Thomas Tuchel has taken that task and did his best to replicate his predecessor’s achievements. Once Tuchel left for PSG, Dortmund had instability on the touchlines. Neither Peter Bosz nor Peter Stoger impressed. Lucien Favre was handed the reins. The Switzerland coach took them to Champions League and pushed Bayern all the way in their title quest.

THE DFB-POKAL IS BACK IN DORTMUND!!! pic.twitter.com/I5Msu6Qik0

Things slowly slipped out of Favre’s hands as Dortmund lost their way midway through the season. A change was needed and Edin Terzic was made the temporary coach after Favre was relieved. They ended the league in the third position and enjoyed glory on the pitch with DFB Pokal.

The Yellow and Blacks decimated RB Leipzig 4-1 in the final with braces from their starmen Jadon Sancho and Erling Haaland. This represented the progress made by them steadily.

Hans-Joachim Watzke Dortmund’s CEO reaffirmed their stance on the club policy. He said “ Our debt currently stands at 26.7 million euros. This shows that BVB has great economic strength and is very stable. We have operated very conservatively over the past decade. Therefore, we are benefitting from the fact that we did not have a single cent of financial liabilities when the pandemic started.”

He added that they might not sell their star players just for the sake of it. Yet when a big-money move was made for Sancho, they let him go. This clearly shows the Rhine side doesn’t value a player over a trusted system.

Even if they lost Sancho, they are more than confident to replace him from within the squad. Gio Reyna, an exciting prospect from the United States of America is raring to take Sancho’s spot. The prospect of losing Haaland is real too and his replacement is already ready in Youssofa Moukoko.

They are getting a new manager in Marco Rose, who plays an expansive style of attacking football. Rose can get the best out of youngsters and experienced players alike to challenge for the league and cups. With fans returning to the stadiums slowly, their matchday revenues would also go up, strengthening their coffers.

The future looks bright for Dortmund if they continue their current approach on and off the field.