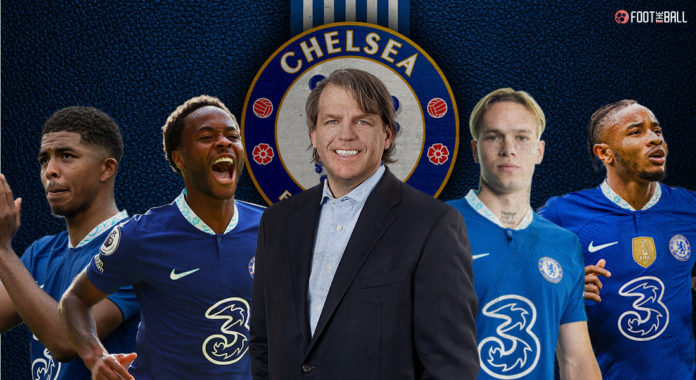 €465 million. That is the amount Chelsea have splurged on acquiring new players this season. Their recent acquisition of Noni Madueke has helped the Blues to the all-time transfer spending record by a club in a season. Ever since Todd Beohley took over as the new owner Chelsea have signed players left, right and centre.

While the signings may not have had the desired effect on results on the pitch, it is undoubtedly making heads turn. In his opening few months as Chelsea owner, the American businessman has made radical proposals to generate interest and boost revenues in the Premier League.

His suggestions included a play-off tournament in determining promotions to the Premier League, a North vs South All-Star derby, the establishment of a network of partner clubs around the club, and also expressed minimal support for the European Super League (ESL).

Even his transfers have seen a radical new approach that may change how clubs pursue a player and how they draft their contracts.

Boehly vowed to change the club’s direction when he became the owner, and the transfer strategy is definitely living up to the expectations. But what is Chelsea’s transfer strategy, and what aim does Todd Boehly intend to fulfil using it? And will it bring a new revolution in European football?

Since taking control of the club, Chelsea have signed players left, right and centre. Starting from the summer, the club has brought in ten players on paid transfers, both full-time and loan. In fact, according to some estimates, Chelsea have spent more money in the last two windows than Liverpool have done in the previous ten years.

So, why is Boehly splurging all this money? Well, there are several factors. Firstly, as an owner, the American has big shoes to fill. Under their previous owner, Roman Abramovich, Chelsea became one of the biggest clubs, winning every possible trophy. So, naturally, this made it an attractive destination for top players.

Thus, when Abramovich sold the club, Chelsea fans were sceptical about whether Boehly could match the Russian’s aspirations.

Secondly, he also wants to give the club a new direction. Under Abramovich, young players with lots of potentials were rarely signed as the club looked for ready-made players. As a result, the players were expensive but, most of the time guaranteed an immediate increase in the team’s quality.

However, under the new ownership, they have gone after the young players, signing them on extra lengthy contracts. As a result, the club are banking on the probability of the young stars fulfilling their potential.

Having such players on a long contract, the club has massive power regarding the transfer of a player. Take, for example, their recent signing of Mykhailo Mudryk. The Ukrainian is only 22, and if he manages to fulfil his potential in two to three years, he will still have at least five years remaining on the contract, which means Chelsea would not have the compulsion to sell him.

Other players such as Marc Cucurella, Carney Chukwuemeka, Cesare Casadei and David Datro Fofana (all six years), Wesley Fofana (seven years), and Benoit Badiashile (seven and half years) have also been tied on similar lengthy contracts.

Spending over €465 million, more than 100 million of which was done in winter, has never been seen in transfer market history. However, Todd Boehly is a man that has made some brilliant investments throughout his life, and there has always been a method to his madness.

Since taking control of the club, the 49-year-old has made various comments, giving us a glimpse into his thought process. From his transfers and lengthy contracts to his All-Star Game suggestion, one thing is common, Boehly wants to be a market disruptor.

Lengthy contracts have always been part of the United States leagues, such as Major League Baseball and the NBA. So are the All-Star games. In addition, sports leagues in the US also need the concept of relegation, which explains why Boehly has not outright criticised the idea of the European Super League.

In short, Boehly wants to change the game into what he deems perfect. And for that, he is ready to splurge a massive amount of cash. Boehly’s aim is to ensure Chelsea have the best young players who would make Chelsea one of the top teams in the world after fulfilling their potential. However, since the players will be on lengthy contracts, other clubs must pay through their noses to sign their players.

This, in his view, would change the thought of all top clubs who would start to emulate Chelsea’s strategy. Boehly’s thinking might also be influenced by the NBA, where the teams compete yearly to sign top young players from American colleges and foreign leagues, called ‘The Draft’.

While this may all sound like a humongous undertaking having little chance for success, Boehly’s actions thus far suggest that he thinks differently.

Will Boehly’s strategy have any impact on transfer market?

Well, this is where it gets tricky as there will be a counter-effort from others to undermine his work. For example, if Chelsea are chasing talented youngsters and offering them a long-term contract, another top club could match the salary and reduce the number of years on his deal, allowing him more flexibility to leave the club if such an opportunity arises.

Chelsea’s strategy hugely banks on the chance that their young signings will succeed. However, if they don’t fulfil their potential, then Chelsea could be left with a lot of deadwood. In the case of Phillipe Coutinho at Barcelona, we have already seen how dangerous a failed transfer can be.

In addition, there was a very different structure at the club before Boehly’s acquisition. Rather than trying to bring changes at a steady pace, the businessman has attempted to alter the club’s structure overnight.

This has caused massive problems that have spilt over to the pitch. The sacking of Thomas Tuchel, combined with the appointment of Graham Potter, who is still learning to manage a top club, has relegated Chelsea to tenth place, closer to the relegation zone than the top of the table.

Boehly can spend all the money he wants, but results have to pick sooner or later as trophies and Champions League football are a major reason why even a young talent would like to join a specific club.

Chelsea will also have to ponder how long they would want to bring in new players before they start to seek returns on their investment. However, for now, the Chelsea experiment shows no signs of slowing down, and neither does Todd Boehly.