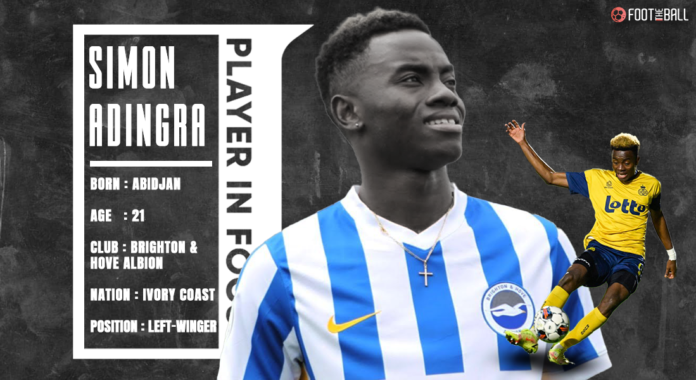 When Chelsea signed Mykhailo Mudryk, Arsenal were left fuming. The Gunners made up for it by signing Leandro Trossard from Brighton & Hove Albion. In this cyclic round of transfer, Brighton are left with a lot of cash and little time to find a replacement for Trossard. However, Brighton might not even have to spend a single penny as they have a player in their squad capable of replacing Trossard. Simon Adingra is on loan from Brighton to Belgian side Royale Union Saint Gilloise and has been sensational this season.

Integrating Adingra into the first team will also allow the club to invest in other areas. Brighton are currently in sixth in the Premier League table and will need continuous investment to be competitive. In a situation like this, having a player of Adingra’s quality for free will go a long way in ensuring Brighton’s long-term success.

So, who is Simon Adingra, and how good is he?

How good is Simon Adingra?

Born on the first day of 2002 in Yamoussoukro, Ivory Coast, Adingra started his career in his native country. He played for various school clubs. However, his journey took a massive boost when he joined the ‘Right to Dream’ academy in Ghana. The academy was started in 1999 and is considered one of the best youth set-ups in the world.

Adingra rose quickly through the academy, putting in some impressive displays. It caught the eyes of Didi Dramani, the head of football at the academy. Adingra’s consistent performances were then rewarded with a move to Europe.

Back in 2015, Right to Dream was part of a consortium that brought the Danish club Nordsjælland. This allowed the youngsters in the academy to have a smooth transition with the same people handling the administration of both institutions.

He was integrated into Nordsjælland under-19 squad, where he played three games in the 2018-19 season. In the last of these matches, he scored his first goal. The following season he made five appearances scoring three goals.

The following season Adingra would also bring his creative side, adding assists into the game. His brilliant displays finally got him a debut for the senior team, where he had his best season ever, which immediately earned him a lot of praise.

Brighton came calling that summer and signed him on a four-year contract before sending him on a season-long loan to Royale Union Saint Gilloise, where he currently is.

In his first season, Adingra made 21 appearances helping the club climb to second place in the Jupiler league. Under Roberto De Zerbi, Brighton are playing some of the most attractive and attacking football, and Adingra has the qualities to thrive in this system.

He is in fantastic form. 10 goals & 8 assists from him in this season, one of the most underrated talent in Europe! 🇨🇮 pic.twitter.com/8Vjn1QVkcb

In his first senior season at Nordsjælland, Adingra played 21 games, accumulating 1,052 minutes. The winger scored six goals and provided three assists for the team. This came in a season where the team finished third from the bottom, which meant he was one of the few positives for the club.

In the relegation play-off, Adingra scored three goals which helped Nordsjælland survive relegation by the skin of their teeth. In the same season, he also played in other tournaments, such as DBU Pokalen and Future Cup, in which he scored four goals in four games.

And this season, Adingra has gone one better, destroying defences in the Belgian league at will. Playing 20 matches, Adingra has scored seven goals and provided three assists. This gives him a goal involvement every 90 minutes.

Adingra can play anywhere across the front line but prefers to play on the left-wing. This allows him to cut back and get the ball on his right foot. In fact, six of his goals this season have come from his right foot.

His heat map also shows this tendency to drift inside to the left channel as soon as he gets near the attacking third. One of his best displays came against SC Braga, where he provided two assists helping Royale Union Saint Gilloise help come back from one nil down to win the match.

He is also an adept dribbler, allowing him to quickly move the ball forward and get out of tricky situations. In addition, he is also a hard-working runner and executes the high press to perfection, a skill that is necessary for a top player in the Premier League.

Moreover, he also doesn’t shy away from performing defensive duties, as he makes 0.7 tackles per 90 minutes and trackbacks when his team are being pressed in their half.

For now, Adingra might not go anywhere as Brighton looks to make him the successor of Leandro Trossard after his departure. However, if he can keep up his performances for the second half of the season, his confidence will also be sky-high, boosting Brighton.

Trossard also came from the Belgian league, which shows that if the player has the right mindset, he could adapt to the pace and quality required to play in the Premier League.

Big clubs will come for him, but Brighton are in the middle of creating an exciting team that could make them a force to reckon with, and having a player of Adingra’s quality will only make them more lethal.

He is primed to be Trossard’s successor. The question is can he become Brighton’s new star? Well, the signs are pretty promising.