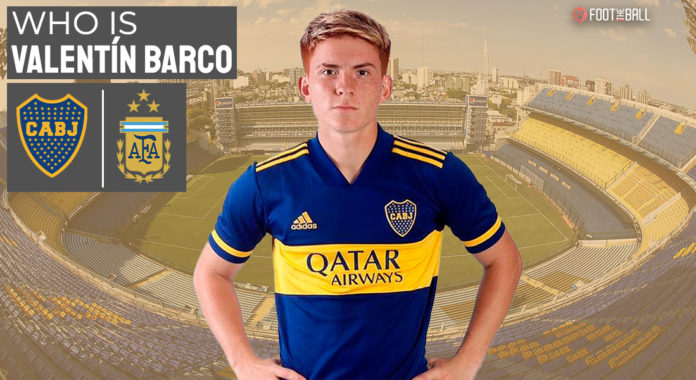 Ever since Argentina won the World Cup, there has been a renewed interest in the Argentinian league and the top players, especially the young, who are plying their trade in it. First, there is the talented Independiente forward Santiago Hidalgo, who is dazzling the crowds at just 17. Then there is Velez Sarsfield’s midfield general Maximo Perrone whose deal with Manchester City fell through in the 11th hour. Other stars are Alejandro Garnacho, who is starring for Manchester United in the Premier League. Valentin Barco is the latest name to join this list after being linked with top European clubs.

A product of the famed Boca Juniors youth academy, Valentin Barco’s rise has been well documented in a nation that has been more famous for developing attackers; Barco has been identified as a top talent by several ex-footballers and journalists.

And finally, in the winter transfer window, clubs from across the Atlantic are starting to sniff around the talented full-back, who could be the next star to come out from the Land of the Silver.

So, who is Valentin Barco, and how good is he?

How good is Valentin Barco?

Born in the town of Veinticinco de Mayo in the Buenos Aires province on July 23, 2024, Valentin Barco started his footballing journey at the age of three as his family moved more than 350 kilometres to the city of Las Parejas where Barco joined Sportivo Las Parejas.

He would spend six years at the club before successfully passing the trials of Boca Juniors and joining their youth academy. In fact, the scout Ramon Maddoni that recommended him to Boca Juniors has also found Carlos Tevez, Juan Roman Riquelme, and Esteban Cambiasso.

Barco would progress through various age groups, where he played as a left winger for the youth side. He was an integral part of the team winning the youth league in 2018.

At the same time, he was also showcasing his skills for the Argentina under-15 national team. His first assignment with the national side was the Vlatko Markovic tournament, an under-15 competition organised by the Croatian Football Federation. Boca Juniors won the title, with Barco playing an integral part.

Boca Juniors signed him to a professional contract as soon as he turned 16. His debut came on July 17, 2021, when he played against Club Atletico Union in a 1-1 draw.

His brilliant performances in the international tournaments caught the attention of Javier Mascherano, Argentina’s under-20 coach who added him to the squad. Barco played three matches for the under-20 team against Peru (two games) and Uruguay, where he also got an assist.

At the club level, he delivered encouraging performances while he only played three matches. Playing only 207 minutes, Barco averaged 62 touches per game with a passing accuracy of 72 per cent. However, it was the defence where he brought his best.

Barco made two interceptions per game while also making 1.7 tackles at the same time. His rapid pace also helped him cover lots of ground and help his team defensively, as evident by his one clearance per match.

Barco also won six duels per game, out of which five were on the ground and one in the air, which is impressive given his 1.72-metre frame.

Valentin Barco is an out-and-out attacking full-back, a rare sight in the Argentinian league. Argentina has never produced a world-class attacking full-back in its history. Yet, it is what makes Barco’s rise so instrumental. Argentina won the current World Cup relying heavily on Lionel Messi’s brilliance.

However, since Messi is already 34, Argentina would need others to step up, which will mean integrating players with the skills required to operate at the highest level in modern football. Barco is blessed with immense pace and acceleration, which allows him to cover a lot of ground and ensure he rarely gets caught out of position.

Due to his exploits as a winger in his youth career, Barco is blessed with brilliant dribbling skills and crossing accuracy. The reason he was converted to a full-back by Boca Juniors youth coaches is because of a lack of quality marauding defenders on the flanks in the Argentinian league and also the national set-up.

He also has amassed a lot of top-level football experience as he was the fourth-youngest debutant in Boca Juniors’ history. His skills will also further develop as he continues to get more minutes and gets accustomed to the level of top-flight football.

Back in 2021, the teenager was being chased by Manchester City, who wanted to add him to their youth ranks. However, Boca Juniors held firm as they had already signed him on a professional contract. However, the contract expires at the end of 2023, so Boca might be tempted to sell him if they cannot agree on a new contract with him.

And according to recent news Juventus are going in all for the talented youngster. The Italian giants are famed for making world-class defenders. However, other clubs are bound to join Juventus, especially if they want to sign him at the end of the year on a pre-contract, meaning they won’t have to pay any transfer fee.

With his performances so far, Valentin Barco has shown that he is ready for the big stage. He now needs consistency, and we could see another start from the Land of the Silver.