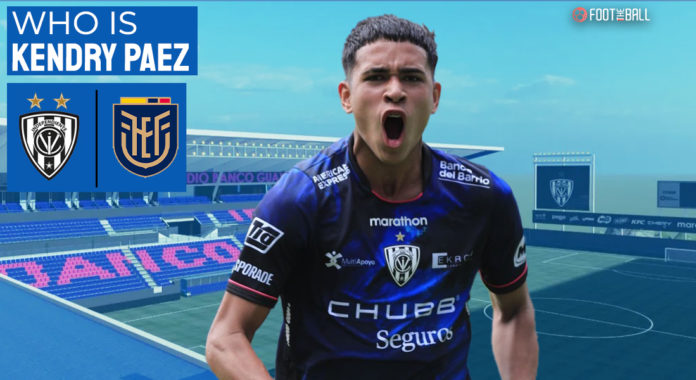 A talented prodigy from South America always attracts world football’s attention. From the 1950s, when Pele rose to global fame, the continent has provided some of the best players who rose to fame at a very young age. The trend has continued in this generation, with several youngsters such as Real Madrid-bound Endrick Felipe, talented midfielder  Palmeiras’ Luis Guilherme, and Athletico Paranaense’s Vitor Roque making their mark in their teens. Now Columbian sensation Kendry Paez looks likely to join the list.

The 15-year-old who plays in the central midfield is rated as one of the best young players in the world. His brilliant performances have now attracted the interest of clubs across the Atlantic Ocean who are in a race to add him to their youth ranks.

In recent years Ecuador has produced some exciting players such as Piero Hincapie, who plays for Bayer Leverkusen; Gonzalo Plata, who plays for Real Valladolid; and Pervis Estupinan who plays for Brighton & Hove Albion in the Premier League.

So, who is Kendry Paez, and how good is he?

How good is Kendry Paez?

Born on May 4, 2007, in Guayaquil, a city on the Pacific Coast, Kendry Paez started playing football at a young age in school. However, he only started playing for a club when he turned 11 when Independiente del Valle, his current club, added him to the ranks.

He was initiated into the under-15s, and since then, he has also played under-17s and under-19s. His performances were so brilliant that Independiente del Valle also sent him to international tournaments such as the Copa Milo (under-18s), Adidas Cup (under-16s), and Salzburg Next Generation Trophy (under-15s).

And Kendry Paez has shone in all tournaments starring for his club. In the Next Generation Trophy, he was even voted the Player of the Tournament. He also averages close to one goal per match despite playing in a central midfield position.

He has been hailed as the best player to come out of the country, a bold statement, but it does have some valid backing.

Kendry Paez was brilliant in 2022, scoring 16 goals in 18 matches, scoring 0.88 goals per 90 minutes despite playing in the midfield. His goals also came on essential occasions. Paez was also instrumental in Independiente del Valle’s win over Inter Mian in the Next Generation Trophy when he scored in the penalty shootouts.

At the same time, he was also selected for Ecuador’s under-17 national team, where he played three matches. Paez was involved in a goal every game, scoring against Argentina and assisting a goal against Uruguay and Peru.

Kendry Paez is 1.77 metres tall, which gives him a physical advantage at the under-15 and under-16 levels. Paez is also pacey and uses it to ample effect against the opposition. Paez is also devastating from set pieces, whether free kicks or corners.

In fact, several of his assists have come from corners and free kicks. He is also adept at playing one-touch football with his teammates, especially in the centre of midfield, to help move the ball forward quickly.

Since he has played as a winger, he also likes to drift to the wings, from where he can use his strong left foot to deliver pinpoint crosses into the box. However, he has been played on the right of a three-person midfield this season. This allows him to use the inside right channel as he can cut back to get the ball on his left foot. Several of his goals have come this way, both from outside and inside the box.

Paez’s weakness is his habit of doing it all alone. Since he is far more talented than any of his teammates, he tries to dribble on his own against the opposition. This makes him a player who can provide the most beautiful of assists and goals but can also be tackled by the opponent, thus snuffing out the attack. However, the huge amount of goals and assists he produces makes up for his high-risk, high-reward strategy.

As mentioned earlier, several clubs were chasing Kendry Paez. However, the race has been won by Premier League club Brighton & Hove Albion. According to several reports, the club are ready to smash their all-time transfer record. Interestingly, the current transfer record for the club is held by Paez’s countryman and his former teammate at Independiente del Valle Moises Caicedo for an estimated fee of £5 million.

2007 talented midfieoder, will debut at just 15 years old — many top European clubs want to sign him, Kendry was the Player of the Tournament in Salzburg Next Gen trophy. pic.twitter.com/Y5WJFVONLN

The Seagulls already have a strong Ecuadorian presence at the club with Caicedo, Estupinana and Jeremy Sarmiento. This will provide Paez with an environment where he will not feel left out. And if he can maintain the level of performance for Brighton’s youth team, expect a senior call-up soon both at the club and the country level.