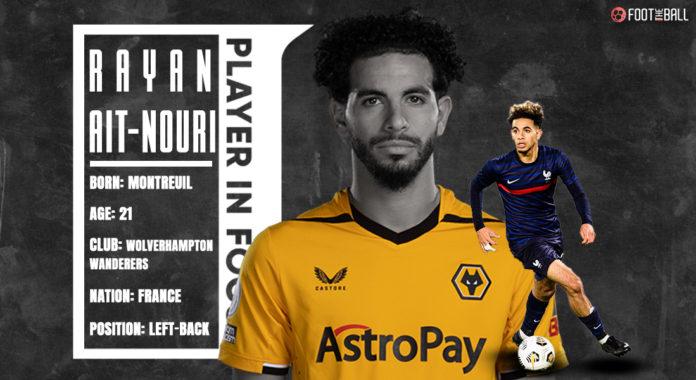 By the barest margin, France lost the chance to become the third nation to defend their World Cup title. However, such is the insane depth that the French possess that they are one of the favourites for the next Euros and the FIFA World Cup. Les Bleus have an array of talented players making their mark across the top five leagues. Rayan Ait Nouri is a player that falls exactly in that category.

The left-back has been one of the few positives in an abysmal season for Wolverhampton Wanderers. The team currently is in 19th, winning three, drawing five, and losing 10. However, if they are to avoid relegation, the players will need to perform far better.

Rayan Ait Nouri is a product of the famed Angers academy that, in recent times, has produced several young talents. Mohamed-Ali Cho, who now plays for Real Sociedad and Azzedine Ounahi, who shone for Morocco at the 2022 FIFA World Cup, both plied their trade at Angers.

So, who is Rayan Ait Nouri, and how good is he?

How good is Rayan Ait Nouri?

Rayan Ait Nouri was born on June 6, 2001, in Montreuil, a suburb of eastern Paris. His footballing journey started in 2009 at the local club AS Val de Fontenay. After three years, he switched to another local club ASF Le Perreux 94, where he would play till 2014. It is here where he caught the eyes of the scout of FC Paris. So Ait Nouri made the switch, and two years later, he got the big call from Angers.

He finally made his debut for the senior team on August 25, 2018, in a 3-1 loss against Paris Saint Germain. At the same time, he also got called to France’s under-18 side, where he would make seven appearances.

The next year he would make 17 appearances playing 1285 minutes and providing two assists. Then, he was sent on a season-long loan to Wolverhampton Wanderers, where he made 21 appearances, scoring one goal and providing one assist.

This was enough for Wolves to sanction a £9.8 million move to make his transfer permanent. Since then, he has been an integral part of the team making 36 appearances.

Described as a ‘wide creator’ by Soccerment, Ait Nouri is one of the best fullbacks when it comes to Expected Threats (xT).

Since joining Wolves, Ait Nouri has taken his game to the next level. Since he is an attacking fullback who is adept at creating chances, his dribbling numbers are brilliant. According to fbref, Ait Nouri completed 1.98 dribbles per 90 minutes in the last 365 days, putting him in the top one percentile of fullbacks.

His dribbling also creates 0.24 chances per 90 minutes in the last 365 days among the top three percentile of fullbacks. Data from Soccerment shows that barring Ivan Perisic (who plays as an attacking wing-back), no fullback ranks higher on the xT metric than Ait Nouri.

He also ranks third on the non-penalty expected goals when considering fullbacks.

However, his attacking instincts do not mean he is not reliant on defending. Fbref data shows that he has made 1.79 tackles in the defensive third, putting him in the top five percentile of fullbacks.

For a fullback, he also draws a lot of fouls, especially near the opposition’s goals. Due to the Wolves style, Ait Nouri has to defend especially playing against the big teams, and this is reflected in his heatmap in which he is covering every inch of the pitch on the left flank.

When analysing his pass map from Soccerment, we come to an exciting conclusion. Most of his crosses come from the edge of the box. It is because of his impressive dribbling display, which allows him to get to the edge of the box and massively improves his crossing accuracy.

And even when he is not creating chances, his intelligent movement helped disrupt the opposition’s shape. For example, Ait Nouri tucks to the wing, playing as a left winger, allowing the attacker to tuck inside the left channel while Ait Nouri draws a defender out of his opposition.

These qualities have been natural to him and are not a result of playing in a specific system. Even in Ligue 1, he was among the top 10 fullbacks for winning tackles and competing with successful crosses and xT from carries.

However, Wolves style of play, coupled with their abysmal form, have had a disastrous effect on his attacking game. Due to this, he is forced to defend for long parts of the game, thus negating his attacking skills.

Even when he plays attacking football, the team is so disjointed that even a quality pass down the left flank leaves the opposition player with lots of space, as Ait Nouri is caught off guard.

If Wolves are relegated, then be assured a top club will sign Rayan Ait Nouri. It is tough to find a 21-year-old fullback who has several seasons of experience playing in the top five leagues. However, with his skill set, especially in attack, Ait Nouri will cause havoc in a team that encourages a high-pressing style.

With his 40 per cent crossing accuracy, he could bag a truckload of assists if he has a competent striker on the end of his crosses. These qualities also make him an able candidate to start for the French national football team, which deploys a system that plays to his strengths.

He could be a strong deputy for Theo Hernandez in future. However, his main job is to ensure that Wolves survive relegation.