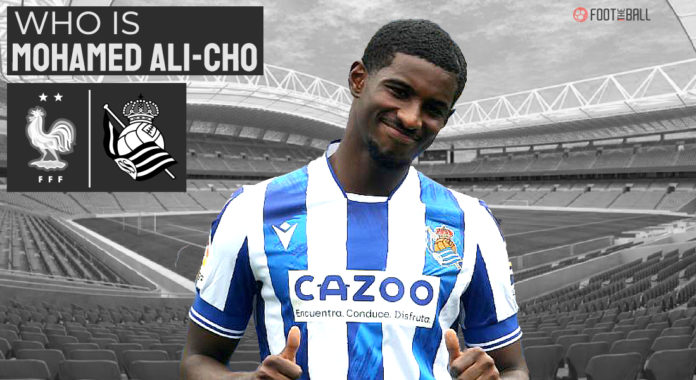 The French are having a golden generation in football. Like Spain and Germany before, the French are stacked with talents in every position. It has already helped them win the 2018 World Cup, and now they aim to become the first team since 1962 to defend their crown in Qatar. At the same time, new French stars are emerging every season. Mohammad Ali Cho is one such player. At just 18 years, Ali-Cho is already an established senior player.

Ali-Cho is a Paris Saint Germain academy product that has produced several top players. Even the current squad has players from the youth academy, such as Warren Zaire-Emery, El Chadaille Bitshiabu, Lucas Lavallee, Ayman Kari, and Ismael Gharbi have been included in the senior team.

The teenager performed admirably in the two seasons at Angers. And this earned him a transfer to Real Sociedad. Ali-Cho has been earmarked for greatness at a young age and possesses the talent to succeed at the top level.

So, who is Mohamed Ali-Cho?

Mohamed Ali-Cho or Momo Cho is a French player who plays as a striker for Real Sociedad. Ali-Cho was born in Stains, France and spent his childhood moving between France and England due to his father’s job. At the age of six years, he joined the French side, US Chantilly, where he spent just one year.

His next stop was Paris Saint Germain. Ali-Cho joined the club at a very opportune moment. In the summer of 2011, PSG were bought by Qatar Sports Investments (QSI). This made them the wealthiest club in world football overnight. And with this came massive investment in the club’s facilities.

The youth academy became one of the best overnight, with world-class coaches and equipment—these immensely helped players like Ali-Cho. After five years in Paris, due to his family, he again crossed the English Channel to join Everton. His five years at Merseyside caught the eyes of Angers.

At Angers, he would make his senior debut at just 16 years. He would make 21 appearances throughout the season. Although he failed to score a single goal, it was a significant milestone for the youngster.

In the following season, Ali-Cho became an integral part of the team. The teenager scored four goals and provided one assist. In the summer transfer window, Ali-Cho was snapped up by La Liga club Real Sociedad for an € 11 million fee. This could rise to € 15 million based on performances.

Mohamed Ali-Cho is one of the finest young prospects in world football. However, at just 18 years, Ali-Cho is still a raw talent. Still, he does rank well on some stats. According to fbref, the Frenchman is brilliant at applying pressure. Fbref stats show that he applies 11.6 pressures per 90 minutes in the attacking third. This puts him among the top three percentile of forwards. He also drops down in the midfield to help out his team.

At his age, what a player requires is a lot of match experience. This helps him improve his fitness and gets him accustomed to performing at the senior football level. Ali-Cho is one of the few players who has played so many matches in the top league at such a young age.

Real Sociedad have got an excellent player on their hand who can even make it to the senior French squad in a few years. He is also a forward who is quite good at holding play. This allows him to create opportunities, making him a multi-faceted striker.

Real Sociedad had an impressive sixth-place finish last season in the La Liga. However, they lost star striker Alexander Isak who went to Newcastle for € 70 million. And Sociedad has replaced him with Umar Sadiq, and Ali-Cho. While Sadiq is the designated starter, he is not at Isak’s level. This means there will be many opportunities for Ali-Cho.

Furthermore, Real Sociedad play a style that encourages high pressing. As a result, there was the fourth-best team in the league in Buildup Disruption Percentage (BDP). And pressing is where Ali-Cho excels. The coach Imanol Alguacil Barrenetxea wants his team to win the ball back quickly. This is why his team were placed fifth in terms of Passes Allowed per Defensive Actions (PPDA).

In conclusion, Sociedad play to Ali-Sho’s strength which will be a massive advantage for the 18-year-old. And a season or two of fantastic performance and who knows, a teenager could find himself at one of the top clubs in football.