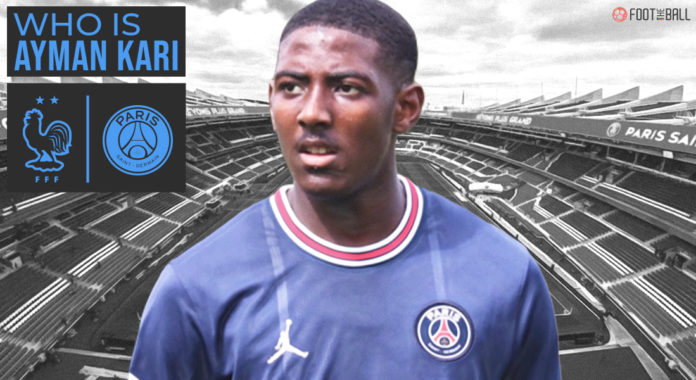 After signing Kylian Mbappe with the costliest contract in football history, PSG were in the limelight. The club had managed to keep hold of their star from Real Madrid’s clutches. PSG have been accused of ruining football through their vast funds, and the Mbappe saga was no different. However, to their credit, PSG have developed some highly talented youngsters in the last few years. Nicolas Anelka, Mamadou Sakho, Kingsley Coman, Adrien Rabiot, and Presnel Kimpembe are some of the top players to come out of their youth academy. And central midfielder Ayman Kari is the latest wonderkid to arrive on the scene.

The highly talented central midfielder caught everyone’s eyes with brilliant performances, especially in the UEFA Youth League. Called PSG’s brightest talent, Ayman Kari has been in the news as he has not signed a professional contract with PSG. Instead, the youngster wants to move to Bayern Munich. The club have already let go of a talented player in the form of Adil Aouchiche and would not want to lose Kari too.

So, who is Ayman Kari?

Who is Ayman Kari?

Born in 2004, Kari is among a group of highly talented players to come out of the club’s youth system. The central midfielder was instrumental for the club in the UEFA Youth League, where they reached the quarter-finals. This is one of the reasons that he is on the radar of several clubs.

🚨 Bayern’s best value signing might not be Mané or Gravenberch this window.

Rated at PSG but yet ANOTHER talent will leave for zero. 😬 pic.twitter.com/lUUHZMyEH3

While his rise has been spectacular, Kari is not sure about his extension at the club. According to reports, the youngster wants to train with the first team. However, the club is stacked with talent, proving a roadblock for him. So far, he has only been acquainted with the under-19s.

The Bundesliga has emerged as a significant talent development league. Kari is excited by this prospect which is why he has not signed a contract with PSG.

The player is currently the prized jewel of the Paris Saint Germain academy. The club views him as an integral part of the future. However, after the Mbappe contract saga, PSG President Nasser Al-Khelaifi said that the club had to move beyond the era of glamorous signings.

“Dreams are one thing, reality is another. Perhaps we should change our slogan… dream bigger is good, but today we must be realistic, we don’t want flashy, bling-bling anymore, it’s the end of the glitter,” he had said.

If Khelaifi wants to follow this, keeping hold of a player like Kari is of utmost importance. At just 17 years, he depicts a maturity level far beyond his years. Therefore, it will be of enormous importance if he manages to break into the first team and fulfil his potential. This is because not only it would mean that PSG would get a top player, but it would also enhance the reputation of the club as a talent developer rather than a talent buyer.

Neymar’s PSG journey may end this summer. Here are top five clubs where the Brazilian could go

Ayman Kari played seven matches in the UEFA Youth League, providing one assist. While his stats are hard to find, team stats reflect a picture. Paris Saint Germain were the second-highest scoring side in the group stages. In addition, PSG was the only team, along with Juventus, who didn’t lose a single match in the group stages.

And Kari was an integral part of such a team, showing his importance. His stats are bound to improve as he progresses through the age divisions.

DM request: Ayman Kari is a decent CM/DM. Due to higher defending probability I prefer him in the DM role. Decent passing game probability and too low finishing probability for my taste. pic.twitter.com/xIPhpRDwco

The 17-year-old is at the start of his career but has shown flashes of brilliance. Playing in a box-to-box role, he has demonstrated good technical skills on the ball. However, his biggest strength lies in his physicality, which he uses brilliantly. Instead of becoming a hard-tackling midfielder, he uses his physicality to keep hold of the ball.

It also helps him in contributing to the build-up play. Kari usually collects the ball from the two centre-backs. Following this, he either uses his physicality to dribble past opposition’s players or play the fall to the fullbacks.

He is also a good passer and always looks for players who can exploit space in the opposition’s half.

While PSG are trying everything to make him stay at the club, it looks likely that he will leave.

Bayern Munich are believed to be the frontrunner for the player. The Bavarians have already brought Tanguy Nianzou from the French capital. Bayern also won the 2019-20 Champions League courtesy of a goal by another PSG youth academy star Kingsley Coman.

Ayman Kari ( 17) will not stay at Paris Saint-Germain for long. The talented midfielder decided to leave PSG after his contract expired and sign his first professional contract with another club. Bayern could be the potential destination for the midfielder.

If the Bavarians manage to get him, it will be a significant coup for the club. However, Kari is not the only player in the dilemma of signing a contract with PSG. Defenders Younes El Hannach, Nehemiah Fernandez-Veliz, full-back Hugo Lamy, goalkeeper Louis Mouquet, and winger Wilson Odobert have also been offered contracts that they are yet to accept except in Mouquet’s case.

Wherever Ayman Kari eventually ends up, he is bound to get fans on their feet.