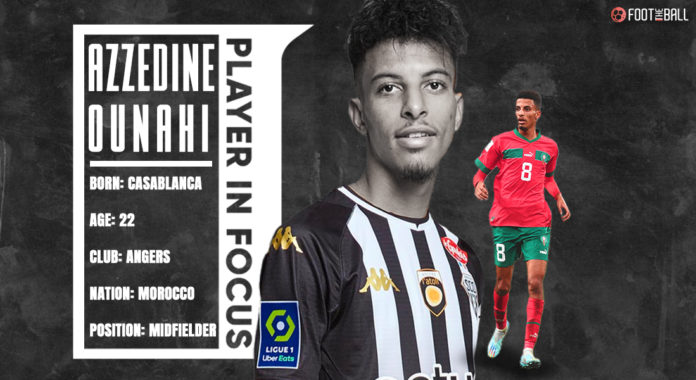 18 months. That’s how long it took Azedinne Ounahi to launch his career. The 22-year-old was playing in French third tier just under 2 years, and now is one of the most sought after midfielders in world football, playing his trade at Anger in Ligue 1.

Morocco’s run at the Qatar 2022 World Cup was exceptional, and the entire football fanbase took notice of it. From Yassine Bounou’s penalty-saving heroics to Sofyan Amrabat’s tireless running in the middle of the park, the Atlas Lions were the talk of the town.

But one player who had gone under the radar was Azedinne Ounahi whose performances alongside Amrabat were as important. His movement and late arrival in the opposition penalty box against Spain in the Round of 16 was what caught the eye of manager Luis Enrique.

Moroccan clubs are also the dominant force in African football right now – winners of the men’s and women’s Champions League titles as well as the Confederation Cup.

Those successes are reflected by the progress made by the 22-year-old Ounahi, who has come on leaps and bounds since first signing for Strasbourg after leaving his homeland in 2018.

How good is Azzedine Ounahi?

In May 2021, US Avranches just about clung on to their Championnat National status, finishing 13th out of 18 sides. But, in spite of their struggles, the French club had a talented young Moroccan in their ranks who was turning heads with stellar performances.

His name was Azzedine Ounahi. An agile midfielder with excellent dribbling skills and outstanding tactical awareness, he never shirked a tackle despite his slim build. It was already clear for all to see that the youngster was destined to play at the highest level.

However, Ounahi would have to wait for his chance to compete in the top flight. Fresh out of the Mohammed VI Football Academy in Sale, Morocco, the midfielder started his senior career at Ligue 1 side RC Strasbourg in July 2018, featuring initially for the reserves.

Despite his slim frame, Ounahi is an aggressive box-to-box midfielder who is as capable of winning in a ground duel as he is of effortlessly evading past five challenges and gliding across the pitch like Teflon, and this is evidenced in his impressive underlying numbers at Angers this year.

Ounahi – as per FBref’s scout report – is in the 99th percentile amongst his positional peers in Europe’s top five leagues for dribbles attempted per 90 (4.48). His shot creation numbers likewise make for impressive reading as he has averaged 0.43 successful dribbles leading to shots per 90, putting him in the 79th percentile for that particular category.

Additionally, the perceived aggressive bite to Ounahi’s game is not made hazy by his numbers defensively. He is in the 93rd percentile of tackles made in the middle third of the pitch among his positional peers in Europe’s top five leagues, making 0.87 per 90.

After a season in Normandy, the young Moroccan left the third division for SCO Angers in Ligue 1, putting his skills to the ultimate test. This turned out to be an inspired move for Ounahi, who quickly became a key player at his new club.

His development and fine performances for the club did not go unnoticed, quickly catching the eye of former Morocco coach Vahid Halilhodzic, who named him, to many people’s surprise, in his squad for the Africa Cup of Nations 2021.

Ounahi made his Ligue 1 debut at the beginning of 2021/22 season, gradually forcing his way into the starting line-up for an Angers side that finished 14th. Fast forward to 2023 and he is one of the top targets for clubs like PSG and Manchester City.

A relative unknown outside his homeland and France, where only Lionel Messi has completed more dribbles in Ligue 1 this season, few are unlikely to forget Ounahi’s name after the World Cup.

Who would have believed that Azzedine Ounahi would start for Morocco in the knockouts of the World Cup, and perform as brilliantly as he did? Morocco did crash out at the hands of 2018 champions France who lost to Argentina in a thrilling final, but at just 22 years of age, Azzedine Ounahi has shown through his impressive performances on the world stage that he is most certainly one to look out for in the years to come.

All that will become clear soon enough, but for now, it is best simply to enjoy him as he lights up the world stage, and to appreciate how far Azzedine Ounahi, the skinny kid with the number eight on his back, has already come. And a transfer in this winter transfer window of 2023 look likely if his performance in Qatar are anything to go by.