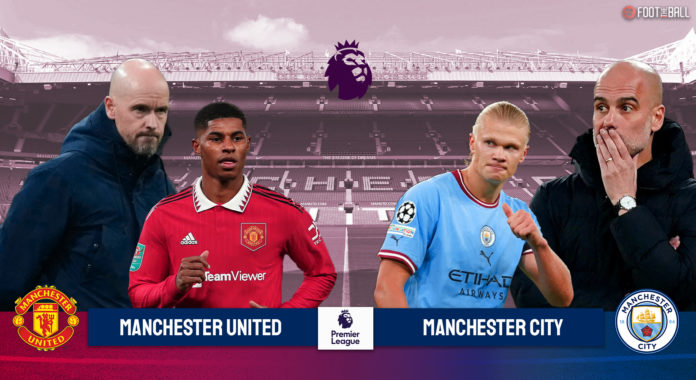 “Will there ever be a time when City come into the derby as favourites?” This was the question a reporter asked Sir Alex Ferguson in 2009. Just a summer back, Manchester City were acquired by the Abu Dhabi United Group, making them one of the wealthiest clubs overnight. They had also made their intentions clear by signing Robinho, Carlos Tevez, Emmanuel Adebayor, Joleon Lescott, Roque Santa Cruz, Kolo Toure, Adam Johnson, Gareth Barry, and Patrick Vieira. Ferguson’s reply was only four words but has since etched itself in football folklore. “Not in my lifetime”, Ferguson had said.

Thirteen years later, it would be hard to remember the last time United were favourites going into the Manchester Derby. It will be the same case when the two teams face each other at Old Trafford. Both teams have their ambitions, as City want to maintain ground against Arsenal in the title race, while United want to stay in the top four.

Post the World Cup; City have taken seven points from three games. Erling Haaland has kept up his scoring form, taking his tally to 21, six more than second-placed Harry Kane. Meanwhile, Kevin de Bruyne leads the league with nine assists. Despite this, City are five points behind Arsenal.

On the other hand, United have been in perfect form after the World Cup winning all of their Premier League matches without conceding a single goal. Their attack has also clicked, scoring 15 goals in seven games across all competitions since the World Cup.

One of the areas where they have improved massively is defence, with several of their bench players, such as Aaron Wan-Bissaka, Harry Maguire, and Luke Shaw, playing an important role.

However, shutting out Erling Haaland and Co. will be the biggest challenge Erik Ten Hag’s men will face.

The only injury concern Erik Ten Hag faces is centre-back Axel Tuanzebe who remains unavailable through a long-term injury. Apart from that, the only absentee is Mason Greenwood, who remains suspended due to the judicial case against him. Ten Hag has opted for Wan-Bissaka as his right-back in the Premier League. Diogo Dalot returned for the Carabao Cup clash against Charlton but was forced off injured in the 34th minute. It remains to be seen whether he will return for the match. Meanwhile, Jadon Sancho is continuing his individual fitness plan to rediscover his form and remains unavailable for the time being.

Like United, City only have significant absentees in Ruben Dias. The 25-year-old, who on paper is the best City centre-back, sustained a hamstring injury in the World Cup and is expected to be out on the sidelines for another two weeks. However, City have reliable backups in John Stones, Manuel Akanji, and Aymeric Laporte. Rodri will likely be partnered by Kevin de Bruyne and Bernardo Silva, while Erling Haaland, Phil Foden and Riyad Mahrez form the attacking triumvirate.

Since the World Cup, Marcus Rashford has picked up form, scoring seven goals and providing one assist in all competitions. In the league, he has scored three goals. His brilliant form has ensured that United are not missing the services of Jadon Sancho. However, against City, he will face Walker, the most adept right-back, to deal with his pace and trickery.

Meanwhile, Erling Haaland is scoring goals left, right and centre. The 22-year-old is just 11 goals shy of breaking Mohamed Salah’s 32 goals record. Since the World Cup, he has scored three goals. The last time he faced United, Haaland scored a hattrick and will be looking to keep the momentum going.

8 – Marcus Rashford is the first Man Utd player to score in eight consecutive home appearances in all competitions since Wayne Rooney in March 2010. Revitalised. pic.twitter.com/WPzXPl9mhp

Manchester United have massively improved from the last time they faced Manchester City. Erik Ten Hag has finally started to mould the players according to his system, which is beginning to work wonders for the team. Taking three points against City will lay down a marker for the team as they look to reclaim the top spot in the English league.

However, City are a team that, on their day, are unplayable, and with the form that Halaand and De Bruyne are in, Pep Guardiola’s men are favourites to take all three points.