Another gem from Palmeiras 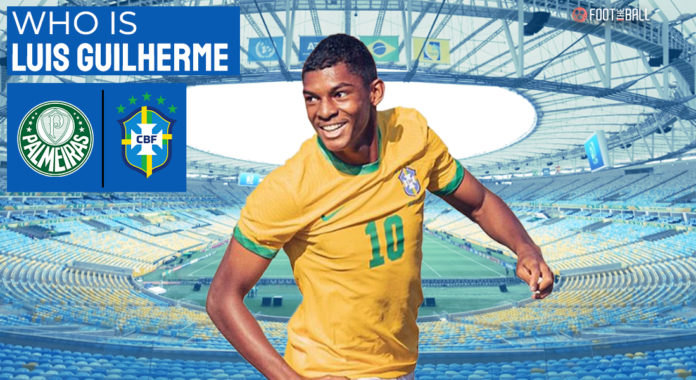 Brazil and wonderkids. It is one of the combinations that has dazzled the football world for years. Every few years, there comes a player who, at a tender age, makes the world stand up and take notice of him. First, there was the legendary Pele, Garrincha, Ronaldo, Kaka, Robinho, and Neymar.

In recent times the most touted wonderkids to come out of Brazil are Real Madrid-bound Endrick Felipe, Santos’ attacker Angelo Gabriel, and Palmeiras Luis Guilherme. The 16-year-old Guilherme is a product of Palmeiras famed youth academy.

Even without making a single senior team appearance, Guilherme is already on the radar of several European clubs. And with Endrick Felipe already going to Real Madrid in the future, it is an opportune moment for Guilherme to show that he is also in the same category.

So, who is Luis Guilherme, and how good is he?

How good is Luis Guilherme ?

Luis Guilherme was born in Aracaju, a city in the north of Brazil. He started playing football at the school level and would represent many of these schools until he reached 11. Then his talent was spotted by Palmeiras, who approached to sign him. He would relocate more than 2000 kilometres to Sao Paulo to join the academy.

Over the five years, he breezed his way through several youth teams, which has made up teams across the Atlantic to stand up and take notice. His talent has also been recognised by the national team, who has given him a call to the under-17 and under-20 teams.

He first came into notice when he scored four goals in 10 matches for Palmeiras under-17 team in the 2020-21 season.

In April 2022, Guilherme would play four friendlies for Brazil’s under -17 team. At the same time, Palmeiras would also play him in the Copinha, the famed tournament for the under-20s squad and representing the under-17 team.

This season, he has made one appearance in Copinha, where he produced a brilliant display to score a wonderful goal.

After scoring four goals in the 2020-21 season for the under-17s, Guilherme was promoted to the under-20s side. At the same time, he would score three goals in four international friendlies for Brazil under-17s, which included a brace against England.

The following season he brought his best, and it shows in the stats. In the under-17s, Guilherme scored 13 goals from 15 matches. He also got his first assist in the Copinha this year. However, since he is only 16, Palmeiras are taking a cautious approach to his development.

This has worked wonders, as Guilherme scored 13 goals across 18 games in 2022. However, he is still far from a finished product, and his skills will develop only with more game time as he comes to terms with his talent.

Throughout his not-so-long career, Guilherme has been played on both the left and right wings. However, playing in both positions, Guilherme always loves to use the inside channel. This is especially the case when he plays on the right wing, as cutting back inside brings the fall on his strong left foot.

The teenager also loves to stay near the half line from where he initiates any attack. This allows him to use his dribbling skills to move the ball forward quickly. Furthermore, while his passing is good, his first touch is a thing of beauty. This helps him control the ball even from the most challenging passes.

His pace and dribbling allow him to get near the goal, from where he plays a simple through ball to put his teammates on goal. However, most of these performances have come at the youth levels, and it remains to be seen whether he can replicate these performances when he gets a shot at the first team.

Last summer, Real Madrid expressed an interest in signing him. Over the years, Los Blancos have had massive success after signing young Brazilian talents. Vinicus Jr and Rodrygo are perfect examples of this strategy. Real Madrid have already signed his teammate Endrick Felipe and looks likely to sign him.

Palmeiras would want to keep him for the time being as they look to develop him further. Even Felipe will join the club in July 2024, and if Madrid can work on a similar deal, they could add another jewel.

However, this season would truly show his greatness as he will be given an appearance in the first team. So, could we see another Brazilian star emerge? The early signs are pretty promising.