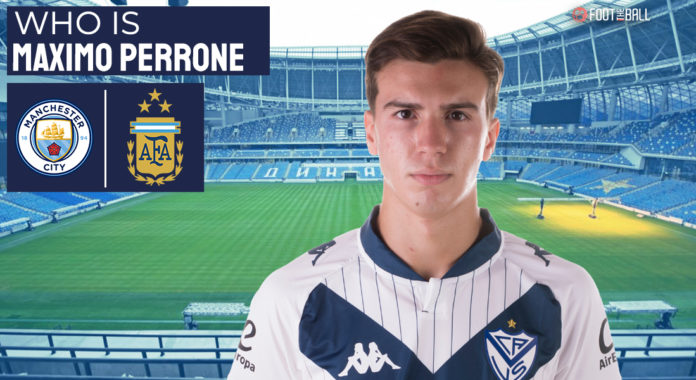 While Manchester City have been winning trophies left, right and centre, one significant achievement that needs to be discussed more is their impressive talent scout network. The club has recognised and signed several talented youngsters that have come good in recent years. Oleksandr Zinchenko, World Cup winner Julian Alvarez, and Brazilian wunderkind Kayky are some examples. Now another name is about to join the list, 19-year-old Argentinian midfielder Maximo Perrone.

Manchester City have completed a deal with Velez Sarsfield, Perrone’s parent club, worth $8m plus taxes. The defensive midfielder will join players such as Thiago Almada ( sold to Atlanta United), Matias Vargas (sold to Espanyol), Santiago Caseres (sold to Villareal) and Maximiliano Romero (sold to PSV), who have all been the results of Velez Sarsfield’s impressive youth system.

Perrone has made massive strides since his debut and has become an integral part of his team. His signing gives City an impressive player who, given two to three years of proper development and loan spells, could become a valuable asset to the team.

So, who is Maximo Perrone, and how good is he?

How good is Maximo Perrone?

Maximo Perrone was born on January 7, 2003, in Buenos Aires, Argentina and started his footballing journey at Velez Sarsfield. First, he started his stint with the Infantil team, which is the under 11-under 13. Then for the next six years, he played for the Juvenil team, which is for players between under 14 to under-19.

During this time, he was also selected for Argentina’s under-16 national team and also played in the prestigious Mondial Football Montaigu, where under-16 teams and clubs participate.

Perrone’s senior debut came against Estudiantes in the Copa Libertadores on March 6, 2022, where he played the entire game as his team lost 4-1. His league debut would come two months later against Club Atletico Patronato.

Perrone will not join City Group clubs, but directly Man City right after the Sudamericano Sub20.

Deal worth $8m plus taxes. pic.twitter.com/tkClu7MNrD

His first goal would come in the Copa Libertadores against Nacional. With the game tied at 2-2, Perrone scored a goal in the fourth minute of extra time to give his team the win. This turned out to be a crucial goal as his team finished one point ahead of Nacional at the end of the group stage. Perrone would also provide two assists, one in the quarter-final against Club Atletico Talleres.

Velez Sarsfield’s journey ended in the semi-final, but Maximo Perrone’s stock took a massive rise. In the league, he scored two goals as Velez Sarsfield finished third from the bottom.

Maximo Perrone made 11 league starts and ten in the Copa Libertadores in the 2022 season. During this time, he averaged 0.21 assists per 90 minutes, ranking him among the top nine percentile of midfielders.

He was also brilliant when it came to performing defensive duties. According to fbref, he made an average of 3.29 tackles per 90 minutes, putting him among the top four percentile of midfielders. Perrone’s passing accuracy was underwhelming, though, making 27.9 passes per 90 minutes with an accuracy of only 80 per cent in the Copa Libertadores. However, his passing accuracy was far better in the league, with an 88 per cent accuracy.

His interception numbers also need improving, as he ranks worse than the top 50 percentile of midfielders in this regard. However, he is still a raw talent, and under the tutelage of Pep Guardiola, we can expect his passing to improve massively.

Maximo Perrone plays defensive midfielder, a position that requires players to be brilliant at stuffing the opposition’s attacks and, at the same time, be brilliant at passing. And while his passing may need improvement, he is brilliant at the defensive side of the game.

One of his best skills is to win the ball in the attacking third. This has allowed his team to press the opposition in their half. Furthermore, his impressive short passing helps him to move the ball forward quickly. This will be a massive asset when he joins Manchester City, a team that uses short passes to build up play. He also covers a lot of ground from time to time, allowing him to play in a box-to-box role.

Perrone is comfortable playing both a three-man midfield and a two-man midfield. This is only possible because he covers a lot of ground and has a brilliant defensive skill set.

Another asset that Perrone brings is that he has captained the side across the youth levels, which makes him a natural-born leader and helps him take well-calculated risks.

Maximo Perrone is a brilliant addition to the duo of Rodri and Kalvin Phillips. It gives Guardiola a good option for a long season where Manchester City are fighting for trophies on multiple fronts. However, a loan spell is the better option, as it will help Perrone gain valuable minutes and experience.

With Rodri and Kalvin Phillips only 26 and 27 years old, respectively, Perrone might have to wait a few seasons before he can be an assured starter. However, if his loan spells are successful, then he could pip at least one of the two midfielders in Guardiola’s pecking order.

However, he has to prove that he can survive and thrive at the top level.