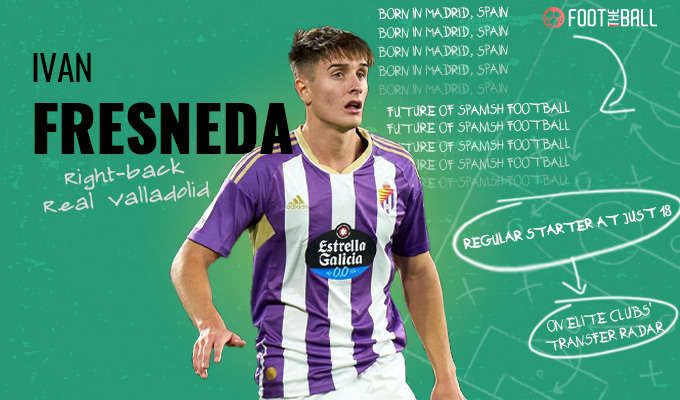 Real Madrid have enjoyed a golden era over the last decade, winning a remarkable five Champions League over that period of time. Even more so, it has been more or less achieved with a similar side for many of those triumphs.

Veteran right-back Dani Carvajal is one of the star-studded players in the Real Madrid side and are considering a long-term replacement. Although Carvajal is only 30, his injury issues and inconsistent performances mean that Real Madrid are looking for a younger player sooner than perhaps they would otherwise.

Along with Arsenal, it has been confirmed that Borussia Dortmund are also officially interested in Real Valladolid right-back Ivan Fresneda. But who is Ivan Fresneda? FootTheBall take a look at his short career so far.

Fresneda was born in Madrid and even spent four years in the Real youth ranks before moving on to Leganes and then Valladolid.

Iván Fresneda is an 18-year-old right back for Real Valladolid in La Liga who made his senior debut in the Segunda Division last season. This season in 2022 he took advantage of an injury at his position and has strung together some admirable performances at a young age in a top-five European league.

The right-back spent some time in the youth academies of Real Madrid and Leganes before joining Valladolid in 2020. The Spanish club is owned by none other than Brazilian icon Ronaldo.

Fresneda is ‘one of the biggest prospects in European football’, having burst onto the scene in recent months. The teenager made his Valladolid debut last season and has clocked up nine appearances overall for his club. This term, Fresneda has featured seven times in La Liga for the newly-promoted outfit. And it looks as though Europe’s elite have liked what they’ve seen from the talented right-back.

On the attack, Fresneda utilizes his dominant right foot with good passing range from the right flank and even mixes his left foot at times. He has a good cross on him and creates chances well.

Fresneda’s stats stand at 2.5 shot-creating actions per 90 which is not surprising given his vision and chance creation. Alongside that, the site records him at 3.46 progressive passes per 90, as well, reflecting the passing range and line-breaking ability with his passes. On ball, Fresneda displays strength not just as a distributor but when ball carrying, too. He is a confident dribbler that utilizes his pace to beat his marker.

Fresneda is 182 cm tall and has a broad build built to withstand physicality. He is built quite maturely for his age and takes advantage well. Athletically, his pace is more than decent for La Liga level, and he does well when changing direction. Fresneda has displayed good strength for his age, too.

When pressing up on opponents his athleticism can overwhelm and is seldom called for fouls in that situation. His tackles are also calm and precise but still bring physicality. His physicality additionally aids him in winning aerial duels that he already has good technique in, a unique trait at fullback. Fresneda has do-it-all ability defending the wing, but he must keep working as quicker wingers have found ways to take advantage of him.

Off the ball, Fresneda is a great support runner in mixed runs, stretching the right flank with his pace well. Fresneda is good at controlling over the top and at his feet in space and has become a major part of the short build-up as he has racked up more starts. In the short build-up, he is positioned more advanced in midfield wide right to link up play to the inverted wingers, often Ecuadorian Gonzalo Plata.

The young full-back is an impressive physical presence on defence using aggression and technique to get the job done. His instincts may be the best part as he can utilize that good pace to make interceptions chance-stopping efforts in cover. Technique-wise, he positions his body well on- and off-ball and flips his hips with his head on a swivel. Fresneda closes space quickly and consistently takes good angles to cut off passes and get blocks.

Tactically, Fresneda’s high work rate defensive style with offensive promise as a creator and ball carrier make him a solid fit for most La Liga clubs thus why he has become one of the better players in a struggling Valladolid side quickly. This balanced style has helped him make a quick rise and Fresneda more than deserves his place in the starting XI even since the league has resumed post World Cup. His solid tactical profile will make him sought after quickly.

Valladolid fought off interest in his signature last summer. The player signed a new deal that included a €10m release clause. That deal also included other clauses which saw his release clause rise to €30m after six games in the first team. When Fresneda hits 22 games, his clause will then go up to €45m according to multiple reports.

According to latest reports, Fresneda has the option to choose between Arsenal and Borussia Dortmund, which by no means is an easy decision.

Fresneda is already a quality La Liga standard right back and there is much time and room for him to grow. Valladolid is a great place for him to continue to develop, but with the way he has shone this early on, it is only a matter of time before a domestic giant tries to get their hands on him. His high ceiling and quality make him an asset that will be hard to hold onto for Valladolid, but playing time at this level will be crucial for Fresneda’s growth and a bigger club cannot offer what they can.