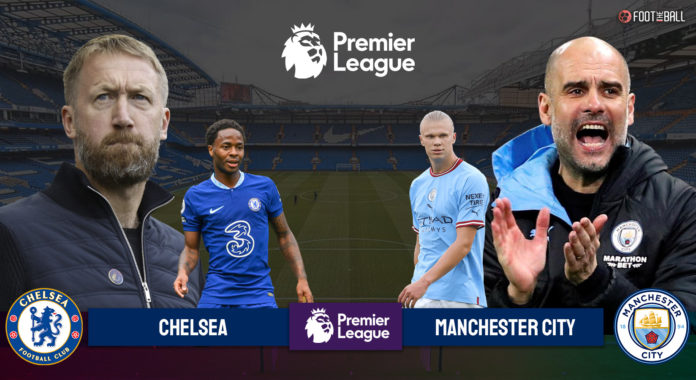 Chelsea’s season continues to hit new lows every week. It has been disastrous for the Blues ever since their previous owner Roman Abramovich was forced to sell his club. From there, it has been one disaster after another. Firstly, the sale of the club was a long and arduous process which finally ended when American businessman Todd Boehly brought the club for a record deal. Secondly, even after spending over € 250 million, the team failed to get a top striker to replace Romelu Lukaku. Thirdly, the results at the start of the season were poor, which led to the sacking of Thomas Tuchel.

Graham Potter was appointed the manager, but results have not improved as they are currently languishing at tenth in the Premier League. This week, it could get even worse as they welcome champions Manchester City in their backyard. The visitors are eight points behind league leaders Arsenal, albeit with a game in hand and they too desperately need a win.

Both teams come off uninspiring 1-1 draws and will be looking to ensure they walk away with all three points. While Erling Haaland has kept his scoring form for City, others have failed to step up. Their last draw also leaves them just one point ahead of a resurgent Newcastle United. Moreover, they also failed to keep a clean sheet in their previous four matches, which will be a concern for Pep Guardiola.

Chelsea have looked towards the transfer market to solve their problems. As a result, they have now added forward David Datro Fofana, Brazilian midfielder Andrey Santos and AS Monaco’s centre-back Benoit Badiashile. They are also looking to add Argentinian World Cup-winning midfielder Enzo Fernandez to the club.

Whether these signings make a difference or not remains to be seen. However, this might be the last chance for Graham Potter to save his job.

Chance of finishing in the top four based on Opta Probability:

Chelsea’s injury list is massive, which has been one of the reasons why they are struggling in the league. N’Golo Kante, Armando Broja, Reece James, Wesley Fofana, Ruben Loftus-Cheek, Ben Chilwell, and Edouard Mendy are all injured. Except for Loftus Cheek, none of the players are expected to feature in the match. It remains to be seen whether Benoit Badiashile will be thrown straight into the playing 11 or Graham Potter will keep faith in Thiago Silva and Kalidou Koulibaly.

Meanwhile, Manchester City have only the fitness of Aymeric Laporte and Ruben Dias to worry about. While Laporte is suffering from back issues, Dias is recovering from a hamstring injury. In the last match, Guardiola had fielded a young squad giving starts to players such as youth academy star Rico Lewis and Nathan Ake. However, against Chelsea, Guardiola will make wholesale changes with Kyle Walker, Joao Cancelo, Phil Foden, and Ilkay Gundogan expected to return to the team.

Before the FIFA World Cup, Erling Haaland had scored 18 goals. There were concerns over whether he could continue his form. However, four goals in three matches in all competitions have alleviated all concerns. And he will need to keep this form going if Manchester City are to catch and surpass Arsenal. Haaland is only 11 goals away from equalling Mohamed Salah’s record of 32 goals, the most by a player in a 38-match league season. And if Manchester City can sort out their defence, Haaland has the quality to win them matches on his own.

100 – Erling Haaland has been directly involved in 100 goals in 81 appearances across the Premier League and German Bundesliga (82 goals, 18 assists). Robotic. pic.twitter.com/qiUkFNxpNl

For Chelsea, it is tough to find a game-changer, but if anyone has the quality in the Blues team to turn around their season, it is Raheem Sterling. The Englishman, who joined Chelsea from Manchester City this summer, is the top scorer with four goals. However, he still needs to do better if Chelsea are to salvage anything out of the current season.

Both teams are desperate for a win, although for different reasons. While Manchester City must win to keep them in the title race, Chelsea have their entire season on the line. Failure to qualify for the Champions League will have substantial economic consequences. On top of that, the acquisition of several players has also increased the wage bill at Stamford Bridge.

And with their poor form, it looks unlikely they will win against the champions. FootTheBall predicts a 2-1 win for Manchester City.