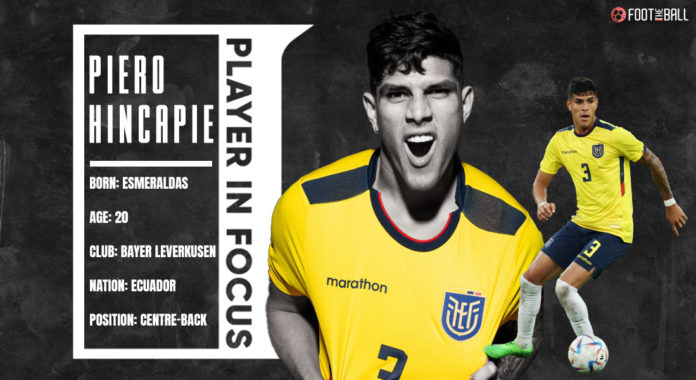 Round the world in 18 months. Independiente del Valle, Talleres Cordoba, Bayer 04 Leverkusen. A meteoric rise; Two different worlds. Memories of home are still fresh, the time before life as a European professional footballer clearly in mind. Hincapie knows about sudden changes as they have followed him from early on.

In 2023, everything in football happens so quickly, In the last century, we rarely saw players that, at 20 years of age, had established themselves amongst the elite of European football. Even less so if they needed to cross the Atlantic. Nowadays, promising players from South America make the leap at a younger age and clubs and national teams begin to invest much earlier in those young prospects they believe are destined to become football stars.

A product of the esteemed Independiente del Valle youth academy, it has taken him less than a year to leave his country, explode in Argentinian football, establish himself as a regular for Ecuador at the Copa America, and announce himself as one of the breakout stars in the Bundesliga – all achieved within 12 months.

Hincapie made his professional debut for Independiente in August 2019, having earlier that year captained Ecuador to a fourth-placed finish at the Under-17 South American Championship. He would make only two further appearances for his boyhood club, however, before being snapped up by Argentine outfit Club Atletico Talleres in the summer of 2020.

He has now made a name for himself at Bayer Leverkusen in the Bundesliga. But how good actually is the Ecuadorian?

How good is Piero Hincapie?

Hincapie has impressed for Leverkusen in the 2022/23 season, despite the Bundesliga club’s difficult start, by showing his quality in a struggling side. He has since won plaudits for his performances for Ecuador at the World Cup, where he was reportedly tracked by various clubs.

The 20-year-old centre-back has had a quick rise in the game, having only left Argentina for Europe last year. And now it seems he will be on his way to one of Europe’s top sides in the near future.

Hincapie joined Leverkusen from Argentine side Talleres for just €6.4m in August 2021. He slotted into the Werkself’s first-team at centre-back, before being moved to left-back under Gerardo Martino. But under Xabi Alonso, who replaced Martino in October, he has returned to centre-back – where his career should lie long-term.

Hincapie stands out as a typical modern central defender, with his ability with the ball at his feet one of his strongest suits. That was on show at the Copa America 2021, where he played the most forward passes of any defender during the group stages (89), and demonstrated supreme calmness when in possession.

He has averaged one shot-creating action, two tackles and three progressive passes per 90 minutes over the last year in the Bundesliga, putting him among the best league-wide for those figures among those in his position. And at just 20, Hincapie has already racked up 24 caps with Ecuador, where he made a name for himself.

Hincapie wrapped up his debut Bundesliga season with 27 appearances under his belt, along with a tackle success rate of 85 percent and 82 percent pass completion. Playing in a further 13 top-flight matches prior to the 2022 World Cup, he is once again among Bayer’s top five players for challenges and aerial challenges won, and successful passes from open play.

Hincapie’s return of 59.3 passes per 90 ranks 24th in the Bundesliga this season. In addition, 242 forward passes ranks 35th of outfielders to have made 10 or more appearances, while 36.3% of his passes go forward.

Despite standing at just over six foot tall (184 centimetres), he also possesses excellent strength in duels, even if he does have to work harder than some to win the ball in the air.

Hincapie made the switch to Leverkusen at the age of 19, after impressing for Ecuador at the 2021 Copa America. Handed his senior international debut in the group opener against Colombia, the 6’0″ defender started all five games as his country reached the quarter-finals, where they lost 3-0 to eventual winners Argentina. He had already made 33 competitive appearances for Argentinian club Talleres when he signed a five-year deal with Leverkusen, for whom he debuted and scored his first goal in the 2021/22 UEFA Europa League groups.

Tenacious, comfortable with the ball at his feet, versatile and left-footed: Hincapie has a lot in common with Bayern Munich counterpart Lucas Hernandez. Statistically – at least for slide tackles, aerial challenges and passes to a man in 2022/23 – he’s even ahead of the France 2018 World Cup-winning defender.

It’s fair to say, though, that Hincapie has been a success story for Bayer Leverkusen, so much so that when it does come time to sell, the German side stand to make a hefty profit. As a left-foorted centre-back, Hincapie is a rarity in the modern game. Managers seeking balance at the back, particularly in a three-man defence, will so often seek a left-footed defender.

That said, at his age, inexperience can rear its head, and this comes to the fore in the form of ill-discipline. Since the start of last season, Hincapie has been yellow carded eight times in the Bundesliga, not a bad return, yet he is one of two players have received multiple red cards in Germany’s top tier this term, the Ecuadorian dismissed in Bayer Leverkusen’s 3-0 win at Mainz in August, and again in their 5-1 loss at Eintracht Frankfurt in October.

The agent of Bayer Leverkusen defender Piero Hincapie feels that if the 20-year-old leaves his club, they will set a fair price for him, and that a transfer in the 2023 winter window wouldn’t be out of the question by any means.

Hincapie has proved to be proficient at the back, impressing for both Leverkusen and for the Ecuadorian national team at the World Cup in Qatar. As far as whether Hincapie could leave Leverkusen during an upcoming transfer window, Sierra explained that “We don’t know yet, he’s one of the most important players in their team.”

“They’ll set what they deem to be a fair asking price for him,” the agent added, “but as of yet we haven’t spoken with them about it.”