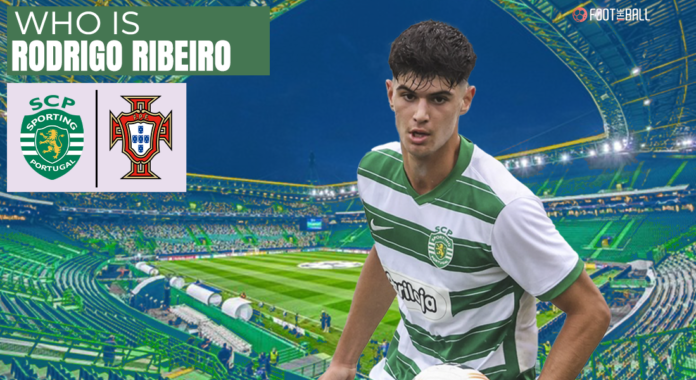 Despite their loss to the impressive Morocco side in the 2022 FIFA World Cup, Portugal demonstrated that they have one of the best young squads. They also have the added experience of players such as Bernardo Silva and Bruno Fernandes. On the other hand, players such as PSG’s Vitinha, Benfica’s Antonio Silva, Joao Felix, Rafael Leao, and Ruben Neves will only hit their peak at the next World Cup. In addition, we could have new stars emerging, one of which could be Sporting CP’s, Rodrigo Ribeiro.

The 17-year-old is one of the top young talents to come out of Sporting’s academy, which developed stars such as Cristiano Ronaldo, Luis Figo, Paulo Futre, Joao Moutinho, Nani and many more. Ribeiro has caught the eyes of everyone in the Portugal football set-up with his diverse range of skills. Having already made his debut for the senior side, it is only a matter of time before he becomes a regular feature of the team.

So, who is Rodrigo Ribeiro, and how good is he?

How good is Rodrigo Ribeiro?

Born in Viana do Castelo, Norte region, in northern Portugal, Ribeiro started his football journey at the local club Viana do Castelo, aged just nine. Ribeiro spent two years at the club before he left to join Alfenense, a club in Alfena, 78 kilometres from Viana do Castelo. However, he would spend only one year here before moving to Sporting, his current club.

It is at Sporting where he started to make waves in the youth sides. In fact, he was so impressive that he was selected for Portugal’s under-16 and scored his first goal in his third start in a 4-3 defeat against Turkey.

At the same time, he was making waves in his club’s youth system. A consistent run of two years was rewarded with a call-up to Sporting’s under-23 side, where he played four games, scoring two goals. In addition, he also played six games in the UEFA Youth League, scoring one goal.

This prompted senior team manager Ruben Amorim to add him to the squad, where he made his debut on the biggest stage, the Champions League against Manchester City.

A month later came his League debut against Tondela. Ribeiro would make three more appearances before the end of the season.

And this season, Ribeiro seemed to be truly bursting at the footballing season at the UEFA Youth League.

"I'm looking more at Rodrigo than Sarabia. It depends on him, he will have more space in the team. I would be able to connect with Sarabia, but I'm more focused on Rodrigo being able to join the team." pic.twitter.com/Yq1F6mCqOw

After scoring his one goal in UEFA Youth League and two in the under-23 Revelaccao Qualifying round, Ribeiro has burst onto the scene this season. The teenager has played six games in the UEFA Youth League, scoring five goals and providing two assists. His best performance came against Marseille, scoring three goals and providing two assists. This was the first time that the world started to take notice of his talent.

His incredible performance helped Sporting top their groups and qualify for the round of 16.

Rodrigo Ribeiro vs Marseille U-19:

Rodrigo Ribeiro while playing in the number nine position, but his skill set allows him to play anywhere across the front line. Even when he is played as a centre forward, Ribeiro always drops back near the centre circle. This allows him to be more involved in the team’s play.

Even when playing as a centre forward, Ribeiro tries to take the ball towards the wings to stretch the opposition. He then relies on his trickery and pace from the wings to get past the opposition players. Also, since Ribeiro is one of the best players in his team, he usually manages to draw more than one defender towards him, which frees up space for his teammates.

Another trait that defines him is his ability to adapt. Ribeiro can create goals and score them, but the manner in which he does it makes him unique. He usually creates his assist from the wings on the inside channel, be it from the right or left wing. And for goals, Ribeiro becomes a poacher. For a player having all the traits of a winger, the forward possesses the divine skill of being at the right place at the right time.

In fact, all five of his goals in the UEFA Youth League are not out of the world, but all had one thing in common; his brilliant positioning and movements.

Rodrigo Ribeiro is a talented player in the Portuguese league. This usually means one thing: keep your consistency and growth, and a big club will come calling. And while Ribeiro is talented, he has to prove that he can perform on the big stage.

Big clubs will be interested in him, but the opportunities he will get at Sporting which are essential for his development. So, despite his talent, it looks unlikely we will get to see a Rodrigo Ribeiro transfer soon.

On top of that, he has also extended his contract with Sporting which means all he has to do is to work hard and realise his talent of becomng Portugal’s next star.