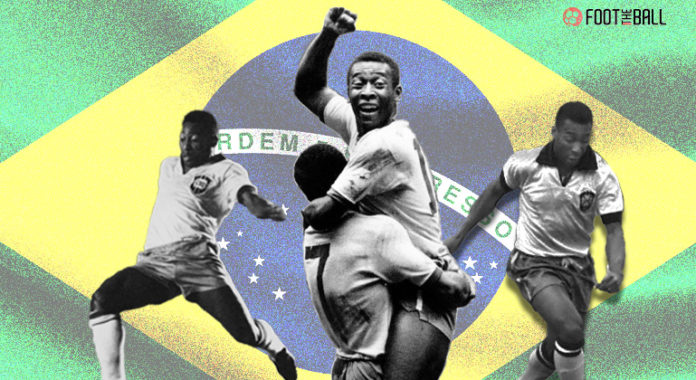 “There is nothing more Brazil than Pelé,” the Brazilian playwright, Nelson Rodrigues pronounced. A muscular, lean, athletic fellow, with magic in his feet and body, standing at 1.73m, running around on football turfs in a bright, canary shirt with number 10 on his back, would gather so much sway that he’ll end up shaping the modern nation of Brazil, the footballing world, and more. Who would have thought? It’s a beautifully strange world that we inhabit.

In Brazil’s constructed epic narrative of O Joga Bonito, Pelé was the mythical hero who gave meaning and aspiration to an entire nation, from the common people to the President.

From the moment he stepped into the Seleção, at the time tormented by the doubts over their apparent “mongrel” nature,  inferiority complex against the Europeans, and the existence of racist beliefs regarding the “physiognomy” of the national team, the irrelevance of these baseless arguments were exposed and silenced.

Pelé had been battling colon cancer for a very long time & has unfortunately lost the fight.

Although he was not the first Afro-Brazilian to enchant on the field, there were others such as Arthur Friedenreich, Joaquim Prado, Domingos, and Leônidas da Silva, among others, but due to his circumstance and destiny, he became football’s original global star.

His seismic emergence coincided with significant advancements in information technology such as the spread of radio and television and, more importantly, because he won three world cups, scored thousands of goals, toured the globe with his club Santos, and played in a manner befitting Joga Bonito’s O Rei, “The King”, he opened a dimension no one thought existed.

And all this while, the colour of his skin mattered so powerfully. What is more, rather than trying to hide his race as some of his predecessors did, Pelé was known to embrace his roots and race. Mário Filho, the famous Brazilian journalist of Pelé’s era, once wrote that “[Pelé] has become the biggest idol in the world’s most popular sport. Whoever cheers him cheers a Black man.”

The stories of genius spread like wildfire throughout the world, from Europe to Africa and Asia. “By standing in the rain at the football and dreaming of Pelé,” Kevin Foster argues that the Western press, particularly the British, registered “a muted protest against the suffocating restrictions of 1950s Britain” where the public was shown the ideals of “equality and plenty” but “the class and racial prejudices” still had a stamp over everything, including football.

In Africa also, Pelé had a metaphorical significance of great gravity, as can be seen in the celebratory columns and poems written about Pelé’s 1000th goal in Africasia magazine, cherishing him as a champion of racial emancipation. “But a black-skinned Pelé is still and above all the embodiment of the advancement of millions of long-despised human beings”, wrote Mahjoub Faouzi.

Before the 1958 World Cup in Sweden, the mood in Brazilian football was smothered with anxieties of existential and racial nature. The hangover of the Maracanazo – the traumatic defeat to Uruguay in the defacto final of the 1950 World Cup at home – still persisted while there was also unease about the perceived superiority of European teams as opposed to Brazil’s inferiority. In their post-mortem of Brazilian football, some sections of the society also said that if the football team wanted to get rid itself of its ailings, it needed to be all-white.

200,000 spectators at the 1950 World Cup Final between Brazil and Uruguay. pic.twitter.com/UsloBqEQIg

Son of a small-time footballer named Dondinho, the 17-year-old from Três Corações named Édison Arantes do Nascimento, or Pelé, who used to shine shoes to help out his family, went for his first world cup in such an atmosphere. In fact, his inclusion in the squad only happened because the veteran players, who were aware of his skill, demanded it. He was otherwise declared “obviously infantile” and in lack of  “the necessary fighting spirit” and “sense of responsibility required for team spirit,” by the psychological examiners hired by the management.

The Brazil coach, Vicente Feola, also had to be persuaded by senior players like Nílton Santos. Feola, who thought of Pelé and Garrincha as “individualistic” and “ill-disciplined” players, was found praising the Swede Kurt Hamrin for his flowery football qualities. Brazilian players pointed out their coach’s hypocrisy, and Pelé, having recovered from his knee injury, as well as Garrincha, got their chance against USSR.

Both of them took to the grand stage like duck to water, and astonished the world with their superior technical abilities. Subsequently, Pelé scored the winner in the Wales game, a hattrick against France in the semifinals, and a brace versus Sweden in the final, which included one of the greatest goals ever scored in a world cup, as the Seleção won their first world cup and uplifted the curse.

😲 #OnThisDay in 1958, a 17-year-old @Pele scored his first #WorldCup goal in Brazil's quarter-final victory over Wales

👑 What a goal it was! pic.twitter.com/lIhiTQgmZT

Pelé’s legend became immortal in the very tournament in which it was fabricated. And yet, it was only the beginning. He would go on to score 1300 goals, more or less, become the only man to win the world cup thrice, and lift the Copa Libertadores and the Intercontinental Cup twice during Santos’ golden era.

In the 1962 World Cup triumph in Chile, Garrincha took over the protagonist’s baton from Pelé as the latter was plagued with an injury mid-campaign. The 1966 England World Cup was even more brutal as, bereft of protection from the referees, he received rough treatment from the opponents and was sidelined with injury. After the tournament, he promised that we won’t play in another world cup.

But then came the 1970 Mexico World Cup, another high point in this career. By that time, Brazil had undergone many social and political changes, and was no longer a democracy but a military dictatorship. For reasons beyond football, Pelé was to play in another world cup, his last.

In the 1970s, the polarising debate between futebol-força, soccer of strength and brute, and futebol-arte, soccer of art and beauty, was also bubbling in Brazil. However, like a wooden door wedge, Pelé’s utter skill and stature postponed this destined arrival of futebol-força, and when the Seleção won in Mexico, they won mesmerisingly.

Yet again a world conqueror, “I’m not dead,” hailed Pelé after the final versus Italy.

Eventually, he retired from international football and spent his last years in club football with New York Cosmos in the States as a soccer missionary of sorts.

Despite his totemic stature, unlike his contemporaries Diego Maradona or Muhammed Ali, Pelé’s views, politics, and public actions were far from radical or subversive.

He portrayed himself as neutral or apolitical, someone for whom football, and only football mattered. However, as is ever, the desire to stay politically neutral is a hollow and outlandish pursuit, all the more for someone who is worshipped like a god by millions.

In his bid to stay indifferent to the happenings around him, Pelé ended up downplaying the reality of racism in Brazil or even the atrocious sufferings inflicted on the common public by Brazil’s right-wing junta dictatorship (1964-1985).

Rather, Pelé was perceived as the establishment’s public relations practitioner, before and during the dictatorship. The leaders of Brazil leaders understood Pelé’s power as Brazil’s emblem, and by moulding his image as per their whims and wishes, they won over the hearts of the Brazilian public.

For instance, in 1961, when the fears of Pelé being lured away by one of the big European clubs had become a raging public debate, the then-President, Jânio Quadros, worried about his future political prospects, passed a bill that declared Pelé as a national treasure and restricted him from being transferred out of the county.

Since 1965, the government started placing secret eyes on Pelé’s trips abroad in the fear that he might speak out against the dictatorship. When he was chosen as the national representative at the opening ceremony of Brazil Square in Guadalajara in the late 1970s, some commentators also described him as President Medici’s “special envoy”.

“I love Pelé but that won’t stop me criticizing him,” Pelé’s former teammate Caju was found saying on the Netflix documentary, Pelé. “I thought his behavior was that of a black man who says ‘yes sir,’ a submissive black man. It’s a criticism I hold against him until this day, because just one statement from Pele would have gone a long way.”

At the same time, it has to be said, as it was by the journalist Juca Kfouri, that the pressure surmounting Pelé from higher authorities was incredible, and if he spoke against them, he might have even risked a state-sanctioned murder.

Flawed as he was, as a Black Brazilian, he however set a timeless precedent few others had. “Like Malcolm X, Muhammed Ali and Miriam Makeba, Pelé is a symbol and a standard bearer,” is how the sports writer Mahjoub Faouzi puts it.

And ultimately, at the end of it all, it was the sheer synergy between a football and his body which created a poetry so inspiring that he could offer dreams, hopes, and joy to adults and children all over the world, perhaps especially those belonging to marginalised communities.