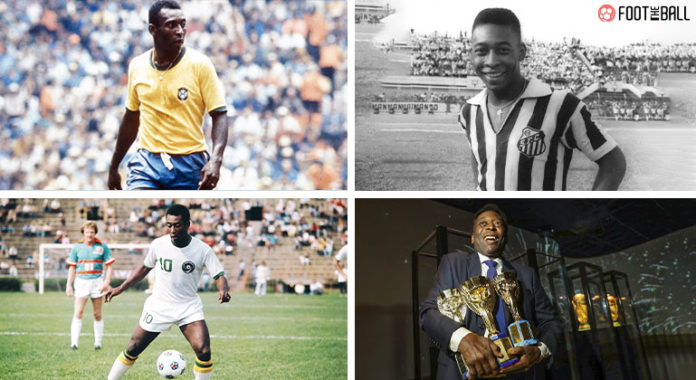 Edson Arantes do Nascimento, famously known as Pele, one of the greatest players ever to play football, passed away. The Brazilian legend breathed his last at the A in Sao Paulo on December 29, where he was being treated for bowel cancer. His passing has caused immense grief to his fans around the world.

Several players, current and former managers, and clubs tweeted their condolences for Pele after his death. Fans also expressed their grief and shock at the death of the three-time World Cup winner. Pele had one of the best playing careers as he won innumerable trophies and, in the process creating several records, some of which stand to his day, and some might never be broken.

Born in Tres Coracoes, Minas Gerais, Brazil, Pele rose to international fame when he represented Brazil at the 1958 FIFA World Cup at the tender age of 17. From there, his career trajectory only went up as he redefined the art of playing attacking flair, termed ‘The Beautiful Game or, as Pele called it ‘, Jogo Bonito’.

So, here are the top five records that Edson Arantes do Nascimento, or Pele, holds.

Most hat tricks in career

Pele redefined the art of scoring during his entire career. The Brazilian had impressive pace and, on top of that, was adept in dribbling and scoring goals. Ever since he broke on the world stage in the 1958 FIFA World Cup, Pele has scored 757 goals in 831 games in his career, the fifth-most in football history.

And 276 of these goals have come in hat tricks. This makes him the player with the most hat tricks at 92. The Guinness Book of World Records recognised this record when he played for Santos, New York Cosmos and the Brazilian national football team. This impressive goal-scoring has brought him 37 trophies, including three World Cups and six Brazilian league titles.

Youngest player to win one and two FIFA World Cups

Four years later, he would return to help Brazil win back-to-back titles. It got Pele another record as, at 21 years, he became the youngest player to win two World Cups. And this is a record that is unlikely to be broken any time soon.

This is because it is highly unlikely that a player will be selected for a World Cup side, and that too for a side that is classified as a favourite.

Pele was the best player to wear the Selecao shirt and has always brought his form when playing for the nation. He scored 12 goals, the fourth-best in history. However, he ranks above all when it comes to scoring for the national team. Pele has scored 77 goals in 92 games, the most by any player in the national shirt.

However, his record might be levelled by Neymar, against Croatia in the 2022 FIFA World Cup quarter-final. However, Pele only played 92 matches, while Neymar has played 122 games so far. And his goals also came on essential occasions.

The best of the best: Top 10 best players ever to play in FIFA World Cup history

Most goals scored in a single calendar year

When Lionel Messi scored 91 goals in a single year, he became the player to score the most goals in a calendar year. However, Pele’s club Santos challenged that, who said that the legend had scored 127 goals in 1959. There was another record by the Zambian Football Association which said that Godfrey Chitalu had scored 107 goals.

However, Pele’s record is supported by FIFA, which recognised that the Brazilian legend is the record holder. Speaking over the situation, a FIFA spokesperson told BBC in an interview,” We don’t have a database which details every football game played in every country from around the world since day one of their formation”.

“It’s certainly nothing to do with bias – if we can confirm records from our tournaments we like doing that,” he added. So thus, Pele, according to FIFA, is the player with the most goals in a calendar year.

Only player ever to win three World Cups in history

Winning even one FIFA World Cup is an impressive achievement that rarely comes. In fact, Lionel Messi and Cristiano Ronaldo, perhaps the two greatest players ever to play the game, are yet to win one. Pele, on the other hand, has three, the only player with this achievement in the tournament; history.

He arrived in the 1958 World Cup as an unknown teenager but would become a superstar in the tournament. However, Pele failed to fire at the World Cup in the group matches as he could not score even a single goal. That all changed in the knockouts as Pele scored six goals, including a hattrick in the semi-final against France, followed by a brace against Sweden in the final to win Brazil their first title.

Pele returned four years later to help Brazil defend their title, although he only played two games before being injured. Unfortunately, Brazil failed to do a three-peat in the 1966 World Cup. Four years later, though, he returned with a side, many have called the best side in World Cup history.

Brazil were a level or two above any other team at the tournament and thrashed Italy 4-1 to win their and Pele’s third World Cup title. And it is improbable that this record will ever be broken.