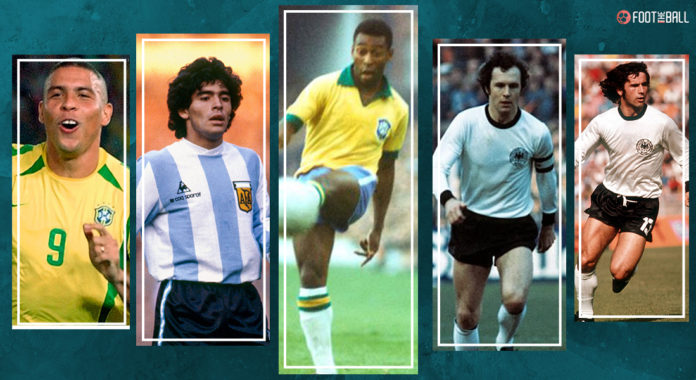 The FIFA World Cup in Qatar starts on November 20, with 32 teams battling it to get to the top of football’s pyramid. It has been a long journey for a tournament that began with only 13 teams more than 90 years back in Uruguay. The World Cup now has 32 teams, billions of viewers, a ton of money through sponsorship and much more. However, one thing has remained the same; only the best players compete in it, whether in 1930 or 2022. This single feature is what is the main reason behind the World Cup’s popularity

Over the 21 editions held in the last 92 years, we have seen some of the finest players compete, shine and thrive. Moreover, the competition has also given a level-playing field to every position. Of course, an important goal has decided a World Cup title, but so has a tackle, an own goal, a brilliant save, a brilliant pass, a brilliant sub etc.

So, who are the ten best players in FIFA World Cup history? We explain.

Imagine a goalkeeper being voted the best player of a World Cup where Ronaldo, Ronaldinho, Miroslav Klose, and Rivaldo were playing. Oliver Kahn was in his prime during the 2002 FIFA World Cup and brought his form to the World Cup in Asia. The German made saves which were very crucial to his team as Germany won all knockout matches before the final 1-0.

Kahn’s performance came just a year after England had beaten Germany 5-1 in Munich, which showed his importance to the team. However, he could not help his team in the final, making an error which allowed Ronaldo to score one of two goals which helped Brazil win their fifth title.

However, Kahn’s performance was so impressive throughout the World Cup that he won the Golden Glove and the Golden Ball award for being the tournament’s best player.

England fans always say, ‘It’s coming home, but the last time it came home was when the World Cup was hosted on UK soil in 1966. It was one of the best English teams and at the centre of its defence was their talismanic captain Bobby Moore, a modern-day defender for his time. He formed a brilliant partnership with Jack Charlton as England defeated top teams, such as France, Argentina, and Portugal, to reach the final.

However, just before the final, head coach, Alf Ramsey was pondering whether to drop the slow Moore for the faster Norman Hunter. However, Ramsey opted for Moore, who would perform his finest final performance. After Germany scored in the 12th minute through Helmut Haller, England equalised six minutes later. And Morre had an essential part as his quick free-kick found the head of Geoff Hurst, who put the ball in the net.

Moore was not finished as in the dying minutes, and he would conjure up an accurate 40-yard pass to find Geoff Hurst, who scored past a hapless Hans Tilkowski to complete his hattrick and bring England their first World Cup title.

In his first two World Cup appearances, Yahsin helped the Soviet Union reach the quarter-finals, where they were knocked out by Sweden and Chile, respectively, who were both the tournament hosts. A year after the 1962 World Cup, he would win the Ballon d’Or, the only goalkeeper to ever win the award.

His best World Cup performance would come in 1966 as he helped his team reach the semi-finals, their best-ever performance.

There are at least 4-5 players who played for Brazil between the 1950s and 60s who were overshadowed by Pele. Garrincha tops that list. The Brazilian was the best winger to play in the FIFA World Cup and was part of two World Cup-winning teams in 1958 and 1962.

Garrincha was the enforcer on the right flank and used his trickery, pace and dribbling to go past opponents. He formed a dangerous attack with Pele, Vava and Mario Zagallo, which shredded any opposition that stood in their way. And while he performed brilliantly in the 1958, the next World Cup would make Garrincha a legend.

Brazil were hit by the injury of their superstar Pele and needed a superstar. It was then that Garrincha would rise to the occasion. He would first dispatch England with his finest display in a World Cup match, scoring a brace. He would then add two more goals against Chile in the semi-final. Finally, Brazil would win the final against Czechoslovakia to become the second team to win back-to-back titles.

Every single dribble performed by Garrincha in the 1962 World Cup, enjoy pic.twitter.com/8op3GGTAld

Playing in five World Cups for one of the most successful national teams in FIFA World Cup history is an achievement. This is why Lothar Matthaus remains one of the best World Cup players. From 1982 to 1998, Matthaus played in five World Cups captaining Germany to a title as well. In addition, the German was the midfield general for Die Mannschaft for almost two decades.

He started his career in 1982 and helped Germany reach three consecutive FIFA World Cup finals. There he would tangle with the best attacker in the world, Diego Maradona. The two tangled twice in the World Cup final. While Maradona won the 1986 bout, Matthaus was more than ready for the next clash, marking Maradona out of the game and helping West Germany win their third title.

He would play two more World Cups, the last one at 38, proving why he brought his best at the best tournament.

Few people can match the effective goal-scoring of Gerd Muller in football history. Der Bomber was as lethal in front of the goal they came, and he made sure his scoring exploits were there for all to see on the biggest stage. His first World Cup came in 1970, and Muller took no time to establish himself on the big stage.

Muller scored an impressive 10 goals taking Germany where they lost to Italy in the ‘match of the century. However, Muller would come back four years later to win the World Cup. Although he was ruthless as of 1970, Muller scored goals when Germany needed them, like against Yugoslavia and in the critical 1-0 win over dark horses Poland.

And his final goal in the competition would be the World Cup-winning one in the final against the Netherlands.

Gerd Muller was Top Goalscorer at the 1970 World Cup with 10 Goals.#FCBayern pic.twitter.com/K8YUji6Up2

The Brazilian team was brilliant all over the pitch, but Ronaldo provided the x-factor that made them the best in the world. He burst onto the scene in the 1998 World Cup in France. While he only scored one goal in the group stages, he got his form back in the knockouts, and he got his form back in the knockouts scoring a brace against Chile and a goal in the semi-final against the Netherlands. However, Brazil would lose the final against France as Ronaldo was voted the best player in the tournament.

Any regret of missing out on the World Cup title was gone in the next one as Ronaldo was at his brutal best, scoring eight goals, including a brace in the final to bring Brazil their fifth title.

The man who invented a position dominated it while captaining his national team to a World Cup title against the might of ‘Total Football‘ of the Netherlands. Considered by many to be the greatest German player ever, Franz Beckenbauer was the force behind the incredible German team of the 1970s.

Nicknamed Der Kaiser Beckenbauer was the inventor of the ‘Libero‘ position. His role was to play behind the defence and ensure no one got past him towards Sepp Maier in goal. And he did the job to perfection. With Maier and Gerd Muller, he formed a triumvirate that was the backbone of the German team.

He was the captain in 1974 when West Germany edged out the Netherlands on home soil to win their second FIFA World Cup title.

If one has to look for an example of a player almost single-handedly taking a team to a World Cup title, one should look at the 1986 FIFA World Cup version of Diego Maradona. The Argentine got his taste of the World Cup at 17 when the tournament took place in his home country. Argentina won their first World Cup, but Maradona played no part in it. Yet, eight years later, he was their leading man.

Maradona was one of the best players then; however, even by his high standards, he outperformed in the tournament. And the exciting thing is that Maradona was at his best in the knockouts. He scored a brace against England in the quarter-finals scoring the ‘Hand of the God’ goal, followed by one of the best goals in World Cup history.

He followed it up with another brace against Belgium in the semi-final before helping his team defeat West Germany 3-2 in the final.

Brazil failed to win the 1966 World Cup but returned strongly in 1970. The team was a level or two above the other teams as they destroyed every team in their path, winning the final in style after thrashing Italy 4-1. Pele made history, and it is unlikely his record will be equalled again.