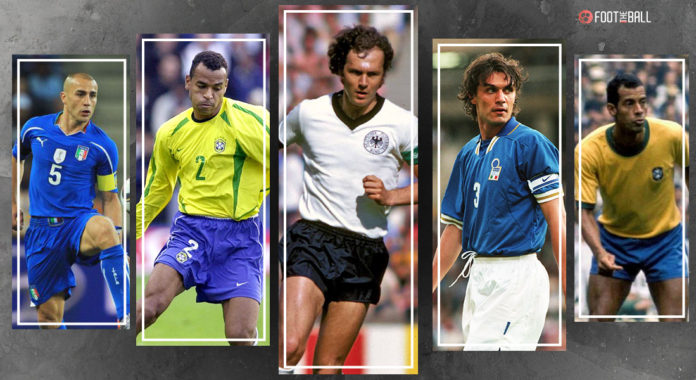 Attack wins you games, and defence wins you titles, said the great Alex Ferguson. And there is nowhere the quote has been more true than at the FIFA World Cup. Over the years, defensive mistakes have had huge impacts. It has decided the results of crucial matches, caused huge upsets, and in the case of Colombian defender Andres Escobar, it led to a murder.

Defending is already a challenging job. However, the added pressure of the World Cup creates such an environment where it is hard to survive. But, the best in these situations do not survive; they thrive. In its 92 years of history, the tournament has seen a plethora of top-tier defenders becoming a part of football history and setting the benchmark to become a legendary backline operators.

One of the critical advantages of having an impressive defence is that it gives a team more confidence, as they know it will be hard for rivals to score.

So, we look at the top 10 defenders ever playing at the FIFA World Cup.

Luis Monti’s remarkable record might never be matched in FIFA World Cup history. It is the distinction of playing two consecutive FIFA World Cup finals for two countries. Monti played in the first World Cup for Argentina, scoring two goals and keeping the defence intact to help the Albicelestes reach the final, where they lost to Uruguay.

He would be back at the tournament four years later, not with Argentina, but with Italy. Again, Monti played in an impressive defence alongside Eraldo Monzeglio, Luigi Allemandi, Attilio Ferraris, and Luigi Bertolini. And the Italians demonstrate their superiority, never conceding more than one goal in a match to bring Italy their first World Cup title.

6 players played for two nations in the World Cup. Only Luis Monti reached finals with both (not least in the first two editions). Robert Prosinečki is unique as he scored for two teams. Samp's coach Dejan Stanković is the latest to do it (2006). pic.twitter.com/4VMKfIpxpB

Only two defenders in history have won two back-to-back World Cups while being an integral part of the team and playing in the final. And one of them was Brazil’s left-back Nílton Santos. Considered to be one of the best fullbacks, Nilton Santos can be called one of the first attacking fullbacks in the game.

The Brazilian played in three World Cups, winning two of them. After failing to impact in 1954, Brazil came with a formidable squad, including Zito, Didi, Garrincha, Mário Zagallo, Vava, and Pele. However, Nilton Santos was one of the players who kept things tight at the back while the attacking stars worked their magic ahead.

The best rise to the occassion: The top ten goalkeepers in FIFA World Cup history

Nilton Santos’s partner on the right flank is the second defender to win consecutive FIFA World Cups, playing both the finals. Djalma, like Nilton, played his first World Cup in 1954. However, things changed in the next tournament as he was dropped in favour of Nílton de Sordi before being selected for the final.

He was one of the match’s stars, making him a part of the All-Star team selected by the Swedish Football Federation. He would play all the games in the next World Cup and provide the assist for the third goal in the final against Czechoslovakia for Vava.

He was also selected in the 1966 World Cup squad despite being 37. He played for the first two matches but was dropped after Brazil lost 3-1 to Hungary.

In the 1982 FIFA World Cup, Italy took the ‘if you don’t concede, you don’t lose’ quote to its extreme length. To say that Italian football during the time was a mess was a gross understatement. The Serie A was hit by the Totonero match-fixing scandal in which several national players were implicated.

So, Italy needed heroes at the tournament, and Gaetano Scirea took the opportunity with both hands. The Italian established himself in the team ahead of the great Franco Baresi. However, Italy’s start was far from smooth as they drew all three of their matches and only qualified for the second round as they scored one goal more than Cameroon.

However, the Italians came to life after that, defeating Brazil, Argentina, Poland and West Germany to win their third World Cup title. During all that time, Scirea was the rock of the defence during all that time showing us the pinnacle of Italian defence.

Gaetano Scirea, probably the greatest centreback of all time made over 400 appearances for Juventus and won every possible trophy available from UCL, league titles and the 1982 world cup. During the 1981-82, Juventus conceded just 14 goals in the league en route to the title. pic.twitter.com/Cg0Kmlq9ZW

Winning two World Cups, being an integral part of the team in both and as a captain in one is the stuff of dreams for any player. Marcos Evangelista de Morais, famously known as Cafu, played his first World Cup in 1994, replacing Jorginho, who was injured after 21 minutes. While most 24-year-olds would have looked out of place after being thrown straight on the pitch in a FIFA World Cup final, Cafu was different. He produced an impeccable performance to keep a clean sheet for the 120 minutes as Brazil won the penalty shootout to get their fourth FIFA World Cup title.

Cafu was an integral part of the team in the next World Cup. He helped Brazil reach the final, where they lost to host France. However, four years later, he would win his second title and, this time, captain the side as Ronaldo wreaked havoc in attack to make Brazil the only team to win five World Cups, a record that still stands to this day.

Brazil 2002 on Sky is a brilliant watch. My first World Cup that I remember.

Franz Beckenbauer is considered by many to be the greatest football player from Germany, a nation with four World Cups. Der Kaiser was a phenomenon in the defence creating the ‘Libero‘ position, and was the best at it. The German made his first appearance at the World Cup in 1966, helping Germany reach the final before losing to England.

However, it would be just the start of an incredible journey as Beckenbauer helped Germany reach the semi-final in 1970, where they lost to Italy in a match dubbed the ‘match of the century. This was another heartbreak for the German, but he got a third time lucky in his native country.

This was the World Cup, where the world saw him at his best. Beckenbauer played the role of Libero to perfection, keeping opposition attackers at bay and helping West Germany to their second FIFA World Cup title.

Many happy returns on your 77th birthday, Franz Beckenbauer! 🎉 pic.twitter.com/TcooZY6qlc

The 1970 Brazilian team is considered by many to be the greatest World Cup team of all time. And with good reason. The team was stacked with talent with Clodoaldo, Gerson, Jairzinho, Rivellino, Tostao, and Pele in attack and midfield. In addition, they had a brilliant captain in Carlos Alberto Torres.

The right-back continued the tradition of Nilton Santos becoming the attacking fullback, regularly running up and down the flank. He formed a brilliant partnership with Jairzinho on the right wing, tearing the opposition to shreds. Brazil were a class above the rest of the team and brought the point home in the final beating Italy 4-1. It was also a memorable match for the Brazilian captain, who scored one of the best goals in FIFA World Cup history after a brilliant sequence of passing and dribbling that left the Italians chasing shadows.

Do you remember this goal he scored from the 1970 Final? pic.twitter.com/O9P8kXWWig

Italy’s last two FIFA World Cup titles in 2006 and 1982 have had one thing in common, a strong defence. Another thing that was the same about the two wins was Italy were not among the favourites at the start. In 2006, the Italians had a brilliant defence including Gianluca Zambrotta, Marco Materazzi, Fabio Grosso and their captain Fabio Cannavaro.

Cannavaro was the rock of the defence, which gave the opposition absolutely no space to operate. As a result, Italy only conceded two goals, an own goal and a penalty. This is the only time a team has won the World Cup without conceding a goal from open play.

Cannavaro was voted the second-best player of the FIFA World Cup and was included in the All-Star team. He would end the year brilliantly by winning the Ballon d’Or, the last defender to win the award.

Day 15 with no football.

2006 was truly the year of Fabio Cannavaro. pic.twitter.com/ep1Mu2Q2aK

Paolo Maldini’s name will be among the favourites whenever the question comes of who the greatest defender was in football. And while Maldini may not have managed to win a World Cup in his impressive career, he still performed brilliantly in all four editions that he played. The Italian made 24 appearances, reaching the final once.

His first World Cup came in 1990 in his host country, where he made seven appearances helping Italy reach the semi-finals. They went one better in the next World Cup, reaching the final, where they lost to Brazil. Unfortunately, his last two World Cups in 1998 and 2002 were disappointing as France and South Korea knocked Italy out, respectively.

He was also a favourite to be part of the 2006 squad, but Maldini suggested that there were younger players that were better than him and deserved to be in the World Cup squad. And it paid off as Italy brought their fourth World Cup title home.

England have only won one FIFA World Cup to date, more than 50 years back. And they had one of the best defenders as their captain back then. Bobby Moore was the rock of the English defence, forming a solid partnership with Jack Charlton. However, even if he was a battle-hardened defender Moore was also an impressive ball passer. The Englishman was one of the best ball-playing defenders of his generation.

He also relished playing in the big matches where he brought his best. In the final against West Germany, he assisted England’s equaliser after Germany went 1-0 down. However, Moore was not done yet, and with the match, in the dying minutes of extra time, he conjured up an accurate 40-yard pass to find Geoff Hurst, who scored his third of the night to bring the World Cup home.