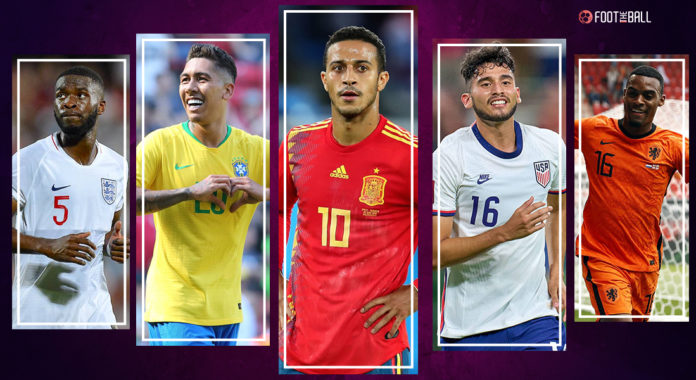 FIFA World Cup. It’s a dream for every player to be a part of the showpiece football event. Some are fortunate enough to participate every 4 years at the World Cup and some are unlucky not even to make the provisional squad list.

FIFA World Cup 2022 squads have been released and some world-class players have once again made the cut making way for those surprise exclusions at the biggest stage. FootTheBall takes a look at these shock omissions who deserved a shot at being a part of the final 26-man squad list.

Liverpool striker Roberto Firmino is likely the most surprising player to be left out of Brazil’s World Cup squad. The 31-year-old forward has had a strong start to his English club’s 2022-23 season.

Firmino, one of the biggest FIFA 2022 World Cup snubs, has reestablished himself as a key player for Jurgen Klopp at Liverpool this season after falling out of favour for parts of the 2021-22 campaign. This season, the forward has six goals and three assists in 12 Premier League appearances for the Reds.

Thiago Alcantara is widely regarded as Liverpool’s best midfielder, and he is almost certain to start if he is fit and able. However, this is not Luis Enrique’s opinion, as the midfielder was left out of Spain’s World Cup squad and was never really in contention to be a part of it.

The No.6 has not played for his country in over a year, and it is clear he is out of the running for a spot in the first team unless injuries present an opportunity for him to play again. Sergio Busquets, Rodrigo Hernandez, Gavi, Carlos Soler, Mark Llorente, Pedri, and Koke will take his place.

The Serie A winner with AC Milan in the 2021/22 season, would be disappointed to not make Gareth Southgate’s England squad. With the impressive statistic of having the most tackles by an English defender since last season, Tomori’s place wasn’t guaranteed, with the likes of Maguire, Coady, Ben White, and Eric Dier, chosen ahead of him.

He formed a formidable partnership with French defender Simon Kjaer in the heart of the defence for the Italian giants, last season, with the best defence in Serie A, and ended up winning the league title for AC Milan after an 11-year wait. However, his inability to replicate his tremendous form from last season might have cost him his place in the England World Cup squad.

Veteran defender Sergio Ramos will not play in his fifth World Cup for Spain. Manager Enrique has opted to go in a different direction for Spain, choosing younger, exciting talent over experienced players who are gaining in age. Ramos is another victim of this policy,
and at 36 years old his Spanish career seems to have come to an end. The PSG defender took to social media to show his disappointment at the snub, stating that it was his dream to play in his fifth World Cup.

Jesus Ferreira, Josh Sargent and Haji Wright each got the nod instead of Ricardo Pepi and a couple of other notable forwards. In World Cup qualifying, Pepi was second to Pulisic in goals scored for the USMNT with three. The 19-year-old FC Augsburg loanee has also been lighting it up with Dutch side FC Groningen, notching six goals and two assists in 14 games. Five goals and two assists have come in eight league games.

Luis Enrique had some difficult choices to make in picking his Spain squad, including leaving a trio of experienced veterans off of his roster in Manchester United goalkeeper David de Gea, Paris Saint-Germain centre-back Sergio Ramos and Liverpool midfielder Thiago Alcantara.

For de Gea, who is still only 32 years of age, the snub was the latest setback in an international career that has seen the Madrid-born player fail to become indispensable. Once seen as the long-term replacement for Iker Casillas, de Gea’s run as Spain’s No. 1 was not a long one. While he played well enough at Euro 2016, his performance at World Cup 2018 was poor, struggling mightily at times and blaming his inconsistency on the new game ball. While de Gea was picked for Euro 2020, he was an unused substitute in all matches. Athletic Bilbao’s Unai Simon, Robert Sanchez of Brighton and Brentford’s David Raya are Enrique’s three keepers for Qatar

Probably the unluckiest player on this list. Tammy Abraham had been in exemplary form in the 2021-22 season and was Roma’s top scorer in all competitions for Jose Mourinho’s team. The English striker spearheaded his Rom team to victory at the inaugural Europa Conference League.

Although, things have turned from good to worse this season for Abraham. He has begun the 2022-23 season on a rough patch going almost 6 weeks without scoring a goal. His most recent goal was just before the break for the World Cup, although it was a case of too little, too late. This was enough for Gareth Southgate to leave Abraham out of the final Three-Lions squad.

It’s been a rough few months for Ryan Gravenberch. His summer switch from Ajax to Bayern Munich was meant to be the making of him; instead, his career has stalled.

Indeed, he’s yet to start a single Bundesliga game for the Bavarians, meaning he had no chance of making the Netherlands squad for Qatar. However, what must really sting for Gravenberch is that his replacement at Ajax, Kenneth Taylor, did make Louis van Gaal’s panel.

England and Gareth Southgate have a plethora of options when it comes to talent and squad depth. With that in mind, a couple of big names were bound to miss out at the World Cup.

Jadon Sancho was the victim in this case. The English winger wasn’t at his best in the first Premier League season and it was repeated this season as well. His form never picked up under former manager Solskjaer and neither it has under new Manchester United manager Erik ten Hag. This led to Southgate eventually leaving him out of the final England squad.

Fernando Santos named 26 players, excluding the PSG midfielder who was adjudged Young Player of the Tournament in 2016 when Portugal won the Euros. The midfielder was a member of  Portugal’s squad for the European Championship last year, where he earned praise for his performances. He was also named to Santos’ preliminary squad of 55 players for the World Cup in October, but he will not be on Portugal’s flight to Qatar.

The squad is led, unsurprisingly, by Manchester United star Cristiano Ronaldo, who will play in his fifth World Cup this month. Portugal will play a pre-tournament friendly against Nigeria on November 17 before opening their World Cup campaign against Ghana on November 24.