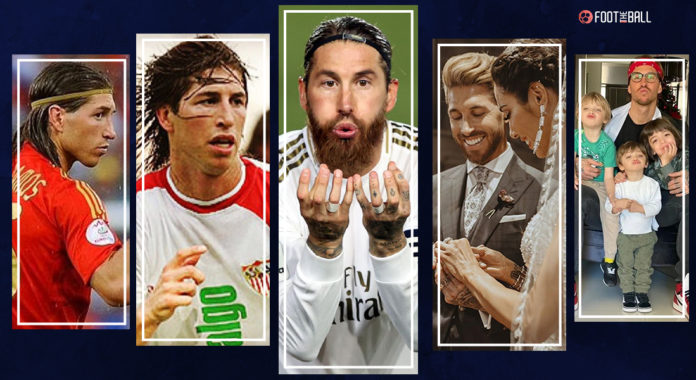 Sergio Ramos is a Spanish footballer, who was the captain and legend of Spain’s national football team and Spanish club Real Madrid. In 2021, Ramos made the switch to PSG in what was an extraordinary transfer window for the French club, which included the signing of Lionel Messi.

He is one of the strongest defenders in present-day football, although he also played as a right-back, from time to time. Born and raised in Andalusia, Spain, Sergio started his career as a player for a local club, Sevilla FC, as a defender at the age of 14. He proved his mettle and was eventually promoted to the main squad. His brilliant performances had him acquired by Real Madrid in 2005.

For the first few years after the transfer, he struggled to make a strong impression and his performances were mostly average. His performance peaked in 2009. Since he was a defender, his goal tally was not too high, but due to his defending skills, he became one of the four captains of ‘Real Madrid’ in the 2009–2010 season. FootTheBall takes a look at some of the lesser-known facts about the current PSG defender.

One of the players with the most red cards ever

He is a solid player who exceeds expectations with his all-round game. A threat in set-pieces, and he is additionally a skilful while aggressive tackler. With great pace, fantastic technique, good passing and crossing skills, Ramos is one of the finest defenders of his generation.

Be that as it may, he holds the record for the highest number of red cards received by a Real Madrid player. The former Los Blancos man also recently got the 28th red card of his career.

Messi scores his first free-kick while Ramos gets his first red card for PSG😅#Ramos #PSG pic.twitter.com/M38eYiSirH

Fan of bull-fighting and flamenco

Sergio Ramos once stood next to a 600-kilogram bull. Ramos confirmed his admiration for the sport of bullfighting but claimed he is still focused on his football.

Patriotism is something close to his heart and he is known to love his country’s traditions, but while he claims he had dreams of becoming a fighter, he has no plans to give up his current career.

His nickname as a child was Schuster

As a child, Sergio played in attack and was nicknamed ‘Bernd Schuster’ after the great German goal scorer by the friends he played with on turfs outside his apartment block. He’d go on to play in defence throughout his career, at right-back and centre-back, but has maintained his brilliant goalscoring ability.

Coincidentally, he was even coached by Schuster at Real Madrid between 2007 and 2008.

His older brother Rene is his agent

Rene actually encouraged Ramos to join his first club, FC Camas. Hard to argue, that Ramos’ older brother’s advice has let him down.

Sergio Ramos has since gone on to win many accolades with both club and country and has partly to thank his brother Rene Ramos for that feat.

IT'S ALL KICKED OFF!

The champions are down to 10. pic.twitter.com/bllBPfcagU

Pilar Rubio Fernandez is the wife of Sergio Ramos, who tied the knot in 2019 after dating each other since 2012. Like Ramos, his wife is also a famous personality. Pilar Rubio is a Spanish reporter and a TV presenter, and, on top of that, she’s a model as well.

She is known for covering various shows and has also appeared in movies as well. In addition, she received the Premio Joven 2007 for the best reporter. The Spanish reporter was also voted the sexiest woman in the world by the Spanish edition of FHM magazine.

His horse Yucatan de Ramos is a world champion

Like any true Andalusian, Sergio loves horses and has done since childhood. He owns stables near his hometown of Seville, and Yucatan de Ramos, his star horse, won a world championship at the 2018 International PRE Horse Fair recognizing it as the finest pure-bred Spanish horse in the world.

He has never scored for Spain at a major tournament

Ramos is Spain’s all-time record appearance holder and has scored 21 goals for his country, a mightily impressive tally for a defender. Bizarrely enough, though, he’s never scored for Spain at a major tournament.

Each of his 21 strikes has come in qualification rounds, in friendlies, or in the UEFA Nations League. Beyond penalty shootouts, he’s never scored at a World Cup, European Championship or even the Confederations Cup.

Ramos has embraced a brilliant international career, winning the World Cup and the Euros successively with Spain. Sergio Ramos made his debut for the senior team all the way back in 2005 against China. Ramos became the youngest player to play for Spain’s national team in the last 55 years at only 18 years old.

Ramos is already Spain’s most-capped football player when he surpassed Iker Casillas with 167 caps. He has the chance to increase that number before hanging up his boots

Sergio Ramos is currently on his way to breaking some records in the future. Although, the 34-year-old has already broken some of them in the past couple of years.

Ramos won his 100th cap for Spain In 2014, becoming the youngest footballer ever to reach that achievement. It happened against Finland during a 2014 World Cup match, a game wherein he scored to make sure of a 1-1 draw.

While the record is of great achievement, a noteworthy point is that he not only turned into the youngest Spanish player to reach that accomplishment, but also the youngest European to do as such too. Lukas Podolski held that crown previously, however, Ramos outperformed the German, doing so ahead of his 27th birthday.