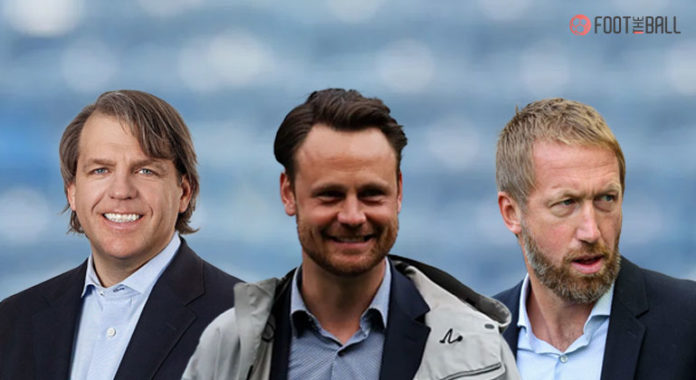 Ever since Todd Boehly bought Chelsea for close to € 4 million, the club have been in a state of chaos. First, the club embarked on a spending spree spending more than € 280 million. Then, however, underwhelming results at the start of the season led to the sacking of Thomas Tuchel. Graham Potter replaced him, but there were other issues plaguing the club. One of them was the absence of a technical director. Thankfully, Chelsea have now filled the role with Christopher Vivell being appointed to the position.

Vivell, who left Red Bull Leipzig suddenly due to a conflict of interest, will now take over reigns at Stamford Bridge. In a statement, RB Leipzig said, “Christopher Vivell was dismissed from his role as technical director on Thursday due to difference contrasting views. His duties will be taken over by the existing setup until Max Eberl’s tenure as sporting director tenure begins.”

His appointment will be a relief for Chelsea, who have struggled to fill several top positions at the club. The club are yet to find a sporting director despite trying their utmost to sign Liverpool’s Michel Edwards and Red Bull Leipzig’s Christopher Freund.

So, who is Christopher Vivell, and what will he bring to Chelsea?

Who is Christopher Vivell?

Christopher Vivell started his career as a video analyst at TSG 1899 Hoffenheim in 2010. The German would stay in this role for only a year before being promoted to a club scout for the reserve team. In his new role, Vivell was expected to identify young prospects. After two years, he was again promoted to a match analyst.

Vivell was impressive at his job, which is why during Markus Gisdol’s managerial era, he was promoted to the first team. After that, Vivell went from strength to strength, serving as a video analyst and then as a scout for Hoffenheim.

During this time, RB Salzburg moved swiftly to snap him up. The German was made the head of scouting at the club. During his tenure, the club signed players such as Patson Daka, Erling Haaland, Karim Adeyemi, and Dominik Szoboszlai. All of these players have gone on to become stars. He was also promoted to Sports coordinator during this time.

And after five successful years in Austria, Christopher Vivell was moved to Red Bull Leipzig, Salzburg’s sister club. Here he assumed the technical director role, a role he will reprise at Chelsea. Here he spent two successful seasons before signing for Chelsea.

What will Christopher Vivell bring to Chelsea?

Ever since Todd Boehly’s era has begun at Chelsea, the club has gone from crisis to crisis. From underwhelming results to Thomas Tuchel’s sacking to unfilled top roles at the club, it seems no one has the time to catch a break.

For now, at least, they have something positive to hold on to. Christopher Vivell brings in loads of experience, which is the club’s need for the hour. However, though highly talented, newly appointed manager Graham Potter has no experience managing a top club. Although Potter has managed to conduct miracles at the Swedish club Ostersund and later at Brighton, Chelsea is a different challenge.

RB Leipzig technical director Christopher Vivell – who signed Erling Haaland for RB Salzburg – doesn’t think €175m is too much for Chelsea to pay for the striker:

“If you can secure him now and pay that much for him, you're not making a mistake because he's still so young.” pic.twitter.com/2UagYAjXVZ

The Blues are a top club where failures are not without consequences. In addition, the club is also notorious for not giving managers ample time to implement their philosophy. This is a new for Potter, who always got at least multiple seasons to shape their team according to his tactics and philosophy.

Thus Potter needs men with experience who can help him with his first major assignment. Moreover, Chelsea fans have been restless since former boss Roman Abramovich was forced to sell his club due to the Russia-Ukraine conflict. The Russian oligarch is the reason Who is not only in England but also in Europe.

Fans are still unsure if Todd Boehly’s era will bring similar success. And while the transfer splurge may have made sure that the American businessman has breathing space, his stature will only grow when trophies arrive at Stamford Bridge.

The appointment of Christopher Vivell is a step in that direction.