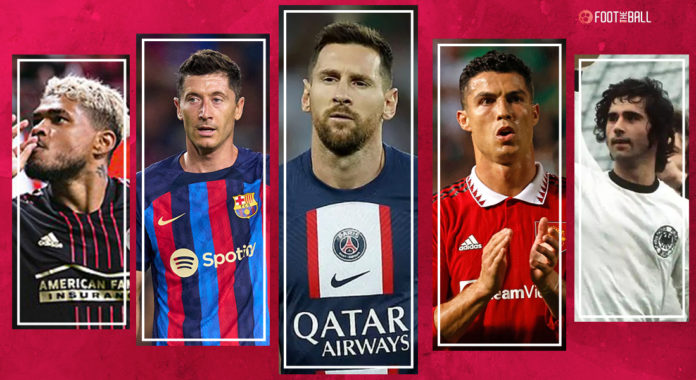 When Erling Haaland signed for Manchester City for € 60 million, it was considered a steal. However, even then, the most optimistic of people would not have anticipated what impact Haaland would have in the Premier League. The Norwegian has already scored 15 goals in nine matches, including three hat tricks. Haaland has also scored in seven consecutive games. However, this is nowhere near the longest goal scoring streak in football.

The game of football has already seen some brilliant players who have made goals scoring an art. These include Cristiano Ronaldo, Lionel Messi, Gerd Muller and Robert Lewandowski. And some of these players have etched their names among football’s longest goal scoring streaks. However, scoring goals match after match is easier said than done. Keeping that form for an extended period is challenging, even for the best. But it is what separates the best from the good.

So, let’s look at the longest goal scoring streaks in football.

The last 15 years of football have seen Cristiano Ronaldo break records left, right and centre. The Portuguese has won an impressive 29 trophies in his club career, along with five Ballon d’Or. And Ronaldo also makes it in our list of the longest goal scoring streaks in football. The incredible thing is that he has done it on three separate occasions. The first came in the UEFA Champions League. He has also achieved the same feat in La Liga. However, his third attempt was perhaps the best of them all as he did it at the age of 35 in Serie A in the process equalling the record held by Gabriel Batistuta.

Robert Lewandowski is one of the best strikers in the world, without any doubt. However, it was at Borussia Dortmund where he was forged into the goal scoring machine. Under Jurgen Klopp and his famed Gegenpressing style, Lewandowski won four trophies scoring 103 goals and providing 42 assists in 187 matches. And in the 2012-13 Bundesliga season, Lewandowski would score in 12 consecutive games, one of the longest goal scoring streaks in football. Robert Lewandowski signed for Barcelona in the summer transfer window, and the Catalan fans must be hoping for much of the same.

Jimmy Dunne was one of the best English football had to offer in the 1930s. The Irishman spent the majority of his career at Sheffield United. And it was here that he created history by scoring in 12 consecutive matches in the 1931-32 English Football First Division, a world record at that time. A season earlier, he had scored 41 goals for the club. This remains the record for the most goals by an Irishman in a single English football season.

The Ligue 1 fields some of the best talents in the world. Kylian Mbappe to Lionel Messi, Neymar to Zlatan Ibrahimovic have all played or are playing in Ligue 1. However, no one has come close to Serge Masnaghetti. In the 1962/63 French Division 1, Masnaghetti would go on to score in 13 consecutive matches. A record that still stands today. What made this even more impressive was that he played for Valenciennes, which finished ninth in the league.

When Estonian top-flight club Flora Tallinn signed Tor Henning Hamre for € 1,70,000 in 2002, no one would have expected the incredible returns they would get from the Norwegian striker. That season, Tor Henning Hamre scored 21 goals in 15 consecutive matches. This run included the seven goals he scored in a single game against Kuressaare and a match Flora won by 17 goals.

The English Premier League is considered the best league in the world, and with good measure. Some of the best players ply their trade in the league, and many others before them have done so. However, no one had broken Stan Mortenson’s record of scoring in 15 consecutive matches. The Englishman achieved this feat with Blackpool in the 1950-51 top-flight season. He ended the season with 30 goals, the highest in the league, helping Blackpool to a third-place finish.

The Major League Soccer (MLS) is starting to make a name for itself on the global football stage. Over the past few years, several young players, such as Christian Pulisic, Ricardo Pepi, Alphonso Davies, and Jesus Ferreira have come out of the league. However, Josef Martinez stands above them all when it comes to scoring goals. The Venezuelan is one of the top goalscorers in the league. And in the 2019 MLS season, he was at his peak, scoring in 15 consecutive matches, a league record unlikely to be broken anytime soon.

When Jimmy Dunne established the record for the longest goal scoring streak in football in 1931, most people would have thought it would be decades before anyone would smash this record. In reality, it took only five years for Teodor Peterek to break Dunne’s record. The Polish who played for Ruch Chorzow created the record in the 1938 Ekstraklasa season, helping them win the title and becoming the league’s top scorer. His record would be equalled only after three decades, and it would take 76 years for someone to break it.

Few players in entire football history could match or surpass the legendary Gerd Muller in goal scoring. The ‘Der Bomber’ won 14 trophies at Bayern Munich, winning four Bundesliga, four DFB Pokal, and three European Cups. And in 1969-70, he went on one of the longest goal scoring streaks in football, finding the back of the net in 16 consecutive matches. He finished the season with 38 goals, the most in the league. So while Lewandowski may have broken his record for most goals in a Bundesliga season (40), the goal scoring streak still stands.

Gerd Muller one of Football greastest and most underrated player ever
Stats and figures
A thread pic.twitter.com/snI993Jcr7

As is with many records in football, the top spot among the longest goal scoring streaks in football is held by Lionel Messi. The Argentine won 34 trophies during his time in Barcelona. However, he was at the peak of his form in 2012. That year, Messi scored a record 92 goals, which included a 21-match goals scoring streak. He scored 33 goals while breaking the record jointly by Gerd Muller and Teodor Peterek. Messi would help Barcelona win La Liga and Supercopa de Espana. And as many records he holds, it seems unlikely to be broken unless Haaland continues his form.