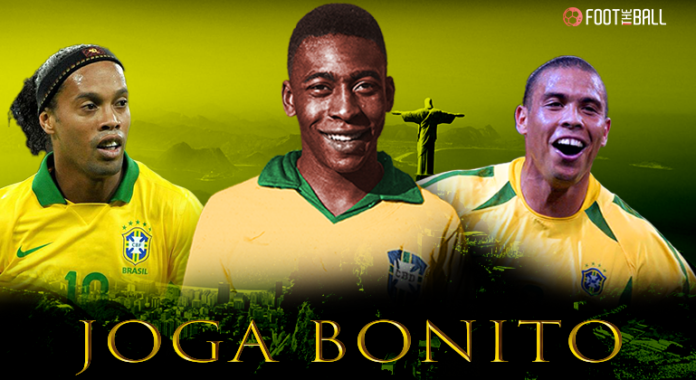 “Beauty comes first. Victory is secondary. What matters is joy.” These are the words of one of Brazil’s greatest players and captains, Sócrates. Just like his namesake, whose ideas have shaped a hefty chunk of Western thought, Doctor Sócrates, in simple terms, expresses the underlying philosophy of Brazilian football, popularly known as “Joga Bonito”.

Around the late 1970s, Pelé – no less than a Brazilian god – popularised the expression “Joga Bonito” which translates as “play beautifully” in English. He also probably adapted the terminology from his teammate Waldyr “Didi” Pereira’s Portuguese phrase “Jogo Bonito”. Some claims, albeit disputed, say that the words “The Beautiful Game” were inscribed by Stuart Hall, an English commentator, in the 1950s.

Words by themselves are simply empty symbols and sounds, and if the question is what puts meaning into Joga Bonito, it’s undoubtedly Brazilian football and the enveloping culture that moulds it. Now, in the ongoing 2022 FIFA World Cup, there has been a lot of hype generated for La Seleção lifting the prestigious trophy after 20 years, and the stakes and world cup winner odds are with them.

It’s a philosophy of football, or even a way of life, that revels in jubilation and enjoyment for those playing and those watching. The emphasis is on playing stylish, attacking football where there’s no dearth of creativity and innovation. Flick it, flip it, dance with your feet, dribble past your opponents, you have the full license for liberation.

The team as a unit stays important but doesn’t transform into the well-oiled machines we commonly see nowadays. The set-up is supposed to primarily open windows for individuals to fearlessly and flamboyantly show their brilliance.

And who has been historically better than the Brazilians when it comes to mesmerising people with their flashy artistry on a football pitch alongside collecting the highest possible laurels in the sport? This is why Jogo Bonito is world-renowned and has become synonymous with the Brazil national team.

Champions of Joga Bonito and the World

Even back in the 1920s and 30s, the teams from Brazil bamboozled their European opponents with their way of football on tours but the world cup, after its advent in 1930, somehow eluded them until 1958. That year, in Sweden, La Seleção became the first and only non-European team to lift the trophy in a European nation.

Since then, having also lifted it in 1962, 1970, 1994, and 2002, Brazil has been the most successful team on the globe. In each era to date, there have been a plethora of players who have exemplified the spirit of Joga Bonito in the bright Canarinho shirt.

There was Pelé, Garrincha, Rivellino & Jairzinho in the 1950s and 60s. The next generation was also blessed with jugadors such as Zico, Sócrates, Falcao, and Junior. The baton then was passed on to heroes like Cafu and Romario. With the emergence of Ronaldo, Rivaldo, Roberto Carlos, Ronaldinho and later Kaká in and around the late 1990s and early 2000s, the pipeline didn’t stop. And this blessing/burden in the current generation was carried by Neymar alone for a while but now there are Vinicius Jr, Antony, and others to share the weight of tradition.

The origins and the influences

While, as talked about earlier, it was Pelé, with all his fame and clout, who initially lit the Joga Bonito wildfire in footballing pop culture.

But, as Gregg Bocketti’s book chapter, “The Invention of the Beautiful Game” would tell you, Joga Bonito was a creation – not a discovery – that was constructed by the ideas and debates that floated around in Brazilian society ever since football’s introduction in the region by the Europeans.

When the Anglo-European originally brought the game to Latin America, they endorsed their notions of morality, order, and gentleman-like behaviour through football, but similar to how cricket developed in a decolonial manner in India and West Indies, football in Brazil went down an uncontrollable tangent, which was guided by the particular cultures and conditions of the land.

Many say that it’s the swagger and sway of Ginga culture which brings out Joga Bonito on the football field. Ginga itself is a blend of Afro-Brazilian art forms such as Samba and Capoeira, where skills and values like acrobatics and happiness through music, are celebrated. These traditional crafts were originally performed in the spirit of community and resistance by enslaved peoples who were brought to Brazil from Africa by the Portuguese.

Football was and is played in every nook and corner of the country, in futsal pitches, in enclosed spaces, in narrow streets, and breaking defences in these settings require people to find innovative footballing solutions. This also ultimately permeates into how football is played by professionals.

Sadly, the forces of globalisation and pragmatism in tandem with the ever-increasing power of European-style football have seeped through and tainted the purity of Joga Bonito of the past.

The biggest existential shock came in the 1982 World Cup when a dazzling Brazil side lost 3-2 to the defensively-astute Italians in Barcelona, and the negative noise surrounding La Seleção’s style of play grew louder and louder.

Gradually, an increasing number of Brazilian players started to leave their home nation in search of greener pastures in club football, and the influence of the European leagues, especially the Premier League, increasingly became overbearing. Even in the current squad selected by Tite, 12 players are from the Premier League while 22 out of the 26 players ply their trade outside Brazil.

However, considering the numerous incidents of harsh criticism of Brazilians’ dancing while playing, and the united response of resistance it received from the representatives of La Seleção, instils some hope for the future. One of them came from Manchester United’s Antony, who in rebellion said, “We’re known for our art and I’m not going to stop doing what got me where I am.”

While it might not be feasible to revert to the glory days of the 1950s, 60s, and 70s, Tite’s response to a question about the significance of dancing in the Brazilian way of football also affirms life. “Naturality… Respect for the culture, respect for who we are. It is happiness, it is joy. Yes, it is a moment for us to be focused and serious. But there are moments when we can have fun, when we can vibrate. Everyone has their own way. Our way is dancing,” he said in the presser.

Obviously, Richarlison netting a swashbuckling overhead kick and celebrating it by dancing with his teammates in La Seleção’s opening fixture against Serbia too serves as an important reminder of what we’ll lose if we look down upon a language of football that aspires to induce joy and happiness for everyone involved.