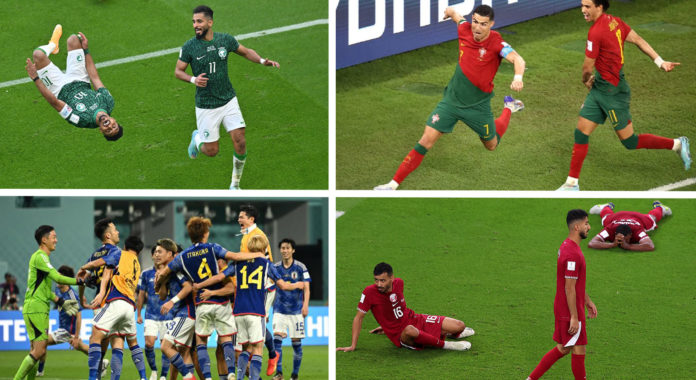 Surprising, staggering, flabbergasting, astonishing, astounding. One can use these words to describe the first week of the 2022 FIFA World Cup. We have seen thrashing, significant upsets, chaos, controversy and whatnot. However, this World Cup is one of the best because no team can be called the outright favourite. Furthermore, no team has shown any consistency, as the teams who have played two matches have shown varying degrees of form.

Saudi Arabia over Argentina, Japan over Germany and Morocco over Belgium show that no favourites are safe in any game, and no minnows can be counted out of a game. But some matches have also seen the top teams flexing their muscles and thrashing lesser opponents. However, the first week has shown us one thing nothing will come easy, and every team, whether big or small, will have to fight for every win.

And week one has set up things nicely for the World Cup ahead.

Cristiano Ronaldo got his name into the record books by becoming the first player in World Cup history. He created the record when he scored against Ghana through a penalty in his country’s first match of the World Cup. The Portuguese has scored in every World Cup since 2006, and while he may not have won it all with Portugal, he has proven his longevity at the top level. Ronaldo scored his first World Cup goal against Iran in Portugal’s second match of the 2006 World Cup.

Ronaldo’s rival Lionel Messi has also played every World Cup since 2006 but failed to score in South Africa. However, Messi is not the only player who scored in four World Cups, three other players share the record. This includes Brazilian legend Pele, Germany’s Uwe Seeler, and World Cup top scorer Miroslav Klose Pele and Seeler did it in the 1958, 1962, 1966 and 1970 FIFA World Cups. Meanwhile, Klose scored in the 2002, 2006, 2010 and 2014 FIFA World Cup.

Meanwhile, Saudi Arabia shocked the world by defeating two-time Argentina 2-1 in the first match for both teams. The Albicelestes started the game on the front foot and took the lead within 10 minutes after Lionel Messi converted a penalty. They put the ball in the back of the net three more times in the first half but were caught offside each time.

However, in the second half, the Saudis were a changed side pressing Argentina in their half. Their first goal came through Salah Al Sheehri, who scored within three minutes of the second-half start. And five minutes, the Asian minnows completed the historic comeback as Salem Aldawsari weaved his way around the Argentinian defence and unleashed a powerful shot past the hapless Emiliano Martínez.

They lose 2-1 to Saudi Arabia in their first game at the World Cup! 🇸🇦🏆 pic.twitter.com/p2HWHOxiEc

Japan took a leaf out of South Korea’s book to defeat four-time world champions Germany in the first match for both teams. And the team from the Land of Rising Sun didn’t disappoint. The Germans, like the Argentinians, took the lead through an Ilkay Gundogan penalty. Die Mannschaft continued to create chances and scored their second goal just before the first half ended, but the goal was ruled out as Kai Havertz was ruled offside.

And just like the Saudis, Japan were a changed side in the second half as they came out all guns blazing. However, they needed more to show for it. This was the case till the 75th minute when Japan equalised through Ritsu Doan, which made the Germans restless as they started to look for the winning goal leaving considerable gaps in the defence. Japan were ready for it as a long pass found Asano, who controlled the ball with a magical first touch before beating Manuel Neuer at his near post. Thus, we had the second upset at the World Cup.

Messi brings hi best while Mbappe shines at the biggest stage: Here are the highlights of matchday 7 of the FIFA World Cup

Morocco stun Belgium to stay alive in the World Cup

The third major upset of the World Cup came on November 27 when Morocco stunned huge favourites Belgium to throw Group F wide open. Belgium had won their first match narrowly against an inspired Canadian side thanks to heroics from goalkeeper Thibaut Courtois. However, against Morocco, the Red Devils looked at all sea and failed to create any clear-cut chances for themselves.

However, on the other end, the Africans were far more clinical with their chances and took the lead with Romain Saïss in the 73rd minute. This meant that Belgium had 17 minutes plus added time to pull things back. And this meant taking risks by venturing forward. And Morocco executed a perfect counter-attack, ending with Zakaria Aboukhlal scoring the second goal in injury time to put the result beyond doubt.

Before the 2022 FIFA World Cup, the worst performance by a host at the tournament was in South Africa. The team had failed to qualify from the group stage but still managed one draw and a win against European powerhouses France. However, Qatar have gone even worse, losing their first two matches, a first for a host. They also became the first host to be eliminated after just two match days and now hold the record for the fastest elimination since the start of the World Cup, which is six days.

What makes it more surprising is that Qatar are the reigning Asian champion after winning the AFC cup in 2019. To make matters worse, their final match is against the Netherlands, the most substantial group in the team and Felix Sanchez will be hoping that his men can at least salvage something from the game.