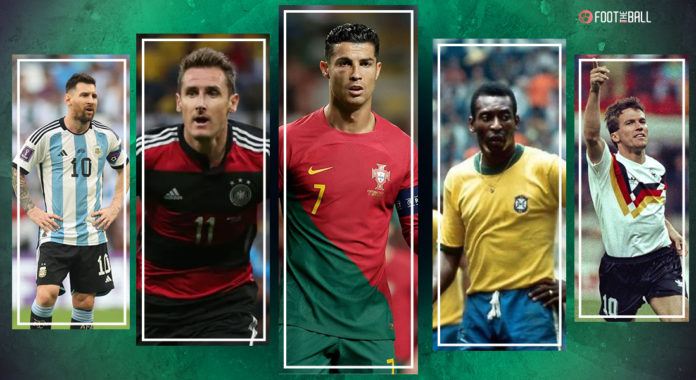 The 2022 FIFA World Cup has started, and just in the first few days has thrown us some brilliant matches and broken some records. Like in the opening match, Qatar became the first host in the tournament’s history to lose their opening match. And one day 2, another record fell as Wales broke the record of the longest gap between consecutive World Cup appearances as they played their first game in the tournament after 64 years.

And now, Cristiano Ronaldo joined the list as he scored against Ghana to become the only player in FIFA World Cup history to score in five different tournaments. The Portuguese overtook Pele, Lionel Messi and Gerd Muller to break the record.

While some FIFA World Cup records have a realistic chance of being broken, others are difficult, and some may never be broken. Some of these records have stood for years, while some have been established recently and at the same time, some have been broken time and again, waiting for a new player to stake their claim on it.

So, here are the top records in FIFA World Cup history.

Players to score at the most FIFA World Cups

Cristiano Ronaldo got his name into the record books by becoming the first player in World Cup history. The Portuguese has scored in every World Cup since 2006, and while he may not have won it all with Portugal, he has proven his longevity at the top level. Ronaldo scored his first World Cup goal against Iran in Portugal’s second match of the 2006 World Cup. And his record-breaking goal came against Ghana in the first match of the FIFA World Cup.

Ronaldo’s rival Lionel Messi has also played every World Cup since 2006 but failed to score in South Africa. However, Messi is not the only player who scored in four World Cups, three other players share the record. This includes Brazilian legend Pele, Germany’s Uwe Seeler, and World Cup top scorer Miroslav Klose Pele and Seeler did it in 1958, 1962, 1966 and 1970 FIFA World Cups. Meanwhile, Klose scored in the 2002, 2006, 2010 and 2014 FIFA World Cup.

The best of the best. Top 10 players in FIFA World Cup history

Brazil are the team with the most titles to their name, with five. The boys from Sambaland   have won the tournament in 1958, 1962, 1970, 1994 and 2002. And during all these titles wins, they have had some impressive players such as Pele, Ronaldo, Garrincha, Romario, Cafu and many more. However, there are other records that the Selecao have. With 73 victories in 109 matches, a win percentage of 66.97 per cent.

The Samba boys have another record to their name; the most titles won with a 100 per cent win record throughout the tournament. They have done it on two occasions in 1970 and 2002 and are tied with Italy for the record, who themselves did the feat in 1934 and 1938.

Most goals in the FIFA World Cup

What makes the World Cup the top tournament is that even the biggest players of the game can fail to perform in it. Take, for example, Lionel Messi and Cristiano Ronaldo, arguably the two greatest players of all time. However, both have played four World Cups and only scored seven goals each, which is not even half of the top scorer, Germany’s Miroslav Klose.

The German has scored 16 goals across four tournaments from 2002-2014. In his first World Cup in 2002, Klose scored five goals before matching this tally four years later in Germany. He added four more in South Africa to move just one goal behind Ronaldo, the then-top scorer. However, Klose missed the third-place play-off against Uruguay due to flu. It appeared as if Ronaldo’s record was safe, but Klose, at the age of 36, returned for the next World Cup in Brazil and scored two goals to go past Ronaldo. Ironically his record-breaking goals came in the record 7-1 thrashing of Brazil in the semi-final.

Most appearances in World Cup matches

Playing one World Cup is good, playing two is impressive, playing three is fantastic, and anything beyond that is legendary stuff. There have been many players that, over the years, have played in multiple World Cups. However, in terms of appearances, it is German midfield general Lothar Matthaus. The German have played in five World Cups between 1982-1998, appearing in 25 matches. He has also reached three consecutive World Cup finals with Germany ( he played in two of them). Matthaus was the captain in 1990 when Germany won their third World Cup as he man-marked a certain Diego Maradona out of the game.

Surprisingly the second spot in the list is Miroslav Klose with 24 appearances which is one of the key reasons why he is the top scorer in World Cup history. And that record can be broken at this World Cup if Argentina reach the final and Lionel Messi palsy every match. The Argentine has made 19 appearances and needs even more to become the record-holder.

🅰️ Lothar Matthaus has made an unparalleled 25 appearances in the competition, but which South American has made the most #WorldCup appearances?

Most clean sheets in the World Cup

Goalkeepers have been an integral part of any World Cup team, and a brilliant one usually helps win a World Cup title. And some of those goalkeepers have taken their performance to the next level at the FIFA World Cup. So keeping a clean sheet is as important as a match or World Cup-winning goal. And the record for the most clean sheets is with two shot-stoppers, England’s Peter Shilton and France’s Fabien Barthez, with 10 to their name.

Shilton played in the 1982, 1986 and 1990 World Cups and was an integral part of the team. He was also in goal during Diego Maradona’s infamous ‘Hand of God’ and the famous goal he would score four minutes later.

Meanwhile, Fabien Barthez made the record while playing for France in 1998, 2002 and 2006 World Cup. He won one title with France and reached the final in another. However, that record can be broken by Germany’s Manuel Neuer, who needs four clean sheets to leapfrog the duo.

There is only one player in the history of the FIFA World Cup who has won three titles. And that player is Edson Arantes do Nascimento, famously known as Pele. The Brazilian is considered by many to be the best player ever to play football. Pele is a special player because he always brought his best to the World Cup. The player burst onto the scene in the 1958 World Cup, where he scored six goals, which included a hat trick in the semi-final and a brace in the final.

In the next World Cup, he played only two matches before being injured, but Brazil still won the title. After that, he failed to guide the Selecao to a third straight title. However, he came back in 1970, starring in a team considered by many to be the best in FIFA World Cup history.

After Pele, there are 20 players who have won two World Cups, most of which come from the Italian team of the 1930s and the Brazilian team of the 1960s, both of whom won back-to-back titles. One of these players is Luis Monti, who has the distinction of winning two back-to-back World Cups with two nations. He represented Uruguay in 1930 and Italy in 1934.

Pele at the World Cup:

The most-played match between two teams

The record of the most contested match in the FIFA World Cup is between Argentina and Germany, who have won a combined six titles. The two have faced seven times in the World Cup, which includes three final matches. These matches occurred in 1958, 1966, 1986, 1990, 2006, 2010, and 2014 World Cups. In the first match, West Germany triumphed over Argentina in 1958 before playing a goalless draw eight years later in England.

However, the next two fixtures came in the World Cup final as they played in back-to-back finals, with Argentina winning in 1986 and West Germany returning the favour four years later. Since then, Germany have won all three fixtures in 2006, which they won on penalty, in 2010, where they thrashed the South American 4-0 and the final in 2014, which brought Germany their fourth World Cup title after an extra time by Mario Gotze.

Most tournaments played by nations

Only one team in the entire World Cup history has played in every World Cup, and that nation is Brazil. The South American country has qualified for every World since 1938, making them the only nation to play in every edition. They have played seven World Cup finals in that time, winning five and losing just two.

Next on the list is four-time world champions Germany who have appeared in every World Cup except the 1930 and 1950 editions taking their tally to 20. Another four-time champion in Italy would have been on par with Germany but having failed to qualify for the 2018 and 2022 World Cups; their tally stands at 18. Two-time world champion France have also qualified for 16 tournaments and so have one-time winners Spain and England.

Most hat tricks in the World Cup

Scoring a hat trick on any occasion is special. However, the feeling is special when done at a World Cup. However, scoring a hat trick in a World Cup is no easy task, and doing it twice is even tougher. It is the reason only four players have scored two hat tricks at the biggest tournament. The four players are France’s Just Fontaine, Poland’s Sandor Kocsis, Germany’s Gerd Muller and Argentina’s Gabriel Batistuta.

Fontaine scored two hat tricks in the 1958 FIFA World Cup against Paraguay and West Germany, in which he scored four goals. He finished with 13 strikes to his name, which remains the record for the most goals scored in a single World Cup.

2 – Gerd Müller scored the only two hat-tricks at the 1970 World Cup (v Bulgaria and Peru) – he is one of only three players to net two hat-tricks in a single edition, after Hungary’s Sándor Kocsis in 1954 and France’s Just Fontaine in 1958. Trio. #OptaWCYears

Batistuta is the only player who has scored hat tricks in two World Cups, which came in the 1994 edition against Greece and Jamaica in 1998.