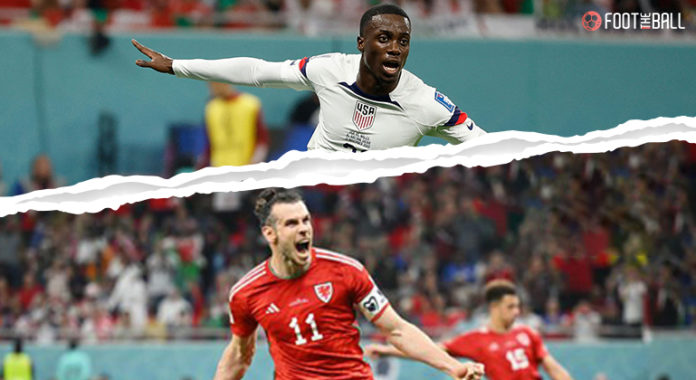 Like an ordinary late-November evening, tonight was no different. The sun which hardly revealed itself was long gone. By 6:30 pm, a dry, chilly cold had tucked in and made itself cosy in Swansea, Wales. But outside the local pubs, which were crowded with people wearing red jerseys and tricolour hats, there was a cluster of noise which relayed excitement and anticipation.

After all, tonight was not ordinary. It was wholly special. There hadn’t been such an occasion for 64 years in this country. Wales of Rob Page, of Gareth Bale, of Aaron Ramsey, of every Welsh football supporter, were playing their first World Cup finals match after 1958, against the United States.

Inside one of the bars, The Griffin, as is custom, flags of all the countries partaking in the World Cup were hung, with the Welsh dragon taking centre stage. It was as if the people in the bar and the ceiling of the place were mirroring each other because the colour red was defining the entire atmosphere. There was also an ocean of the life-affirming Spirit of 58’ bucket hats, an entity that has become a national emblem lately.

Wales is one of the four countries that constitute the island we know as the United Kingdom (UK). Football culture infiltrates the bare bone in all of the UK, and Wales is no exception. While Scotland and Northern Ireland have their own domestic leagues, Welsh teams feature in the English football pyramid. What’s more, until recently, Wales existed in the footballing shadow of mighty England, certainly on in the international circuit. But under this golden generation of Welsh players marshalled by Page and Bale, the trend is changing. The Dragons have qualified for three of the last four major tournaments.

“Absolutely everything,” exclaims Jack, an insurance company employee in Swansea. “Playing in the World Cup means so much; even if we lose all three games, I can say I’ve seen Wales in the World Cup.” Ashley, another fan in the pub, chips in, “This is what dreams are made of!”

Like their fellow supporter Jack, Charlie and Josh and Greg and Dale and Ashley, and perhaps every other Welsh supporter, uses the same word – “everything” – to describe the essence of this World Cup qualification for them. “This team is bringing people together,” adds Charlie.

“I’m thinking of the people who’ve been following Wales and haven’t had a chance to see them in the World Cup or people who will not have a chance. This is our time,” tells Jack.

Too small
Too slow
Too weak
Too full of fear

But YMA O HYD you sons of Speed

With that Red Wall around us

This long road to ecstasy was not deprived of agony and heartbreak for Wales. “I’ve supported the team from the dark days of the 90s with [Ryan] Giggs, [Ian] Rush and [Neville] Southall. I remember as a kid when Paul Bodin hit the bar with ‘that’ penalty that stopped us from going to the USA in 1994. That hurt. And then there was losing the playoff to Russia for the Euros in 2003,” recalls Richard, a sports journalist based out of Swansea. Before 1994 and 2003, there were heartbreaks of similar magnitude in 1977 vs Scotland and in 2017 vs the Republic of Ireland.

So when the dreamy day arrived against Ukraine earlier this year, it was no wonder that there was an incredible release of collective emotion for Welsh fans. “Simply unbelievable. It was tearful really. Just wanted to cry… like we’re actually here,” remembers Dale.

“Moment is big anyway, so regardless of the result. We will be happy,” Ashley describes what the emotion going into the first fixture was.

The game itself was an affair of two halves antithetical to each other. Gregg Berhalter’s USMNT dictated the first segment of the game while the Dragons were content with sitting deep in defence in an attempt to secure their shores.

Page’s gameplan was dismantled by the brilliance of the duo of Christian Pulisic and Timothy Weah. In the 36th minute, after receiving a reverse pass from Josh Sargent in the middle of the park, Pulisic embarked on a piercing run through the Welsh midfield before playing an inch-perfect pass into Weah’s diagonal run in the penalty box, which he cooly dispatched with the outside of his boot.

With the introduction of Kieffer Moore at halftime and Brennan Johnson later, the tables were flipped upside down after the interval, as the Americans could find no joy in this half while the Dragons piled on the pressure.

“He’s our man. He took us here. It takes just one moment for Bale to create Welsh history again,” Ashley had prophesied at the halfway mark.

And following missed opportunities by Ben Davies and Moore respectively, Walker Zimmerman fouled Bale from behind and conceded a penalty in the 82nd minute. Without any blemish of a doubt, the Welsh captain slammed home the spot kick.

The eruption in the bar after Bale’s strike was among the loudest sounds I’ve ever heard. It came from a feeling of plain, unabridged, jubilation mixed with pride in equal parts.

Son of the only African Ballon d'Or winner George Weah, Timothy Weah making his own history scoring for the USA vs Wales at the #QatarWorldCup2022

Pride is an important feeling for Welsh fans, and since their stars have aligned in such a way that they’ll be facing England on the biggest stage, they cannot be more chuffed about anything else.

“England fans… they don’t want us to do well, but we are going to do well. People across the world think Wales is in England. But it is not in England. Wales is in Wales, and we’re here to show for it,” says Josh, “I mean all we want is to beat England.”

Tuesday, November 29th, they will have their opportunity, and it’s safe to say, the Dragons will roar even louder and prouder on the day of the derby.