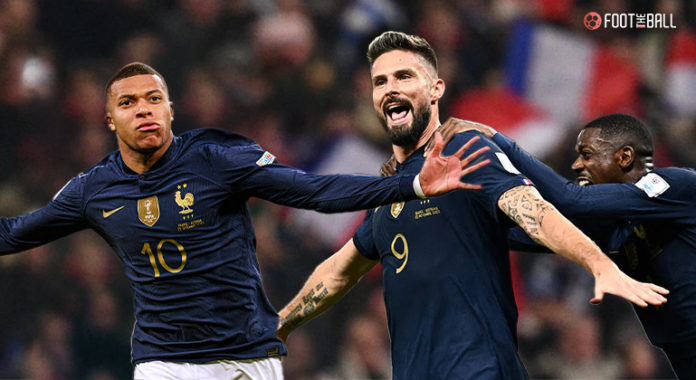 Under the bright lights of Al Janoub Stadium in front of nearly 40,000 people, the defending champions, France, yet again squared off against Australia in their group opener, just like they did in Kazan, Russia in 2018.

After starting with a slumber and being slapped for it by the Socceroos, who had laid out a clear gameplan of locking their defences and pouncing on their opposition’s mistake, the beast within the French woke up and, barring a couple of un-punished blemishes, tormented the Aussies to emerge victorious, 4-1.

Having soaked the first wave of French pressure, a fluent move started by Harry Souttar from defence and finished by Craig Goodwin gave Australia the advantage in the 9th minute.

In the 27th minute, Theo Hernández showed his class in France’s much-needed equaliser by producing a frisbee of a cross which was dispatched with authority by Adrien Rabiot.

Soon after, Rabiot turned presser, ball-snatcher, and provider to Olivier Giroud’s first goal. In the second half, Les Bleus decided to wreak havoc on a now-subdued Australia.

In the 68th minute, the duo of French wingers combined for France’s third with Kylian Mbappé finally having his name on the scoresheet.

Within a span of three minutes, Mbappé and Co again flexed their muscles, as the number 10 waved his foot-wand and assisted Giroud for the striker’s international goal number 51 and France’s fourth.

Much of the talk has focused on Les Bleus’ midfield, or the lack of it, and Karim Benzema’s injury, but this match was a good time to remind the world that the French (still) have wings, and they make them fly high.

On either flank, throughout the game, Ousmane Dembélé and Mbappé ran the Socceroos’ wide defenders ragged. Just ask right-back Nathaniel Atkinson, who spent the game dancing to the PSG frontman’s tune but failed miserably.

Dembélé and Mbappé shared a goal, two assists, six key passes, and eight dribbles between them.

Griezmann, who frequently dropped deep into the middle of the field, also performed a significant role. He was the connecting link that liberated and unlocked the potential of the French wide men, including Theo Hernández. Griezmann dispatched the most number of key passes in the team (6).

The full-back Theo Hernández’s unplanned introduction in place of his brother proved to be a blessing in disguise as he showed more eagerness to venture forward and complement Mbappe on the left flank.

The fact that Kingsley Coman, who is a world-class wide forward in his own right, sits on the French bench further beef up Les Bleus’ wing powers as well as giving them a security net in the wide positions.

In the last World Cup, although an indisposable part of the machine, Giroud lifted the cup without scoring a goal. Today, he corrected that. The number 9 bagged two goals, full poacher-style.

The first one was perhaps the easiest tap-in of his lifetime, and the second involved a long leap, impressively strong core muscles, and a perfect header that came in off the inside post, Giroud has now become the oldest French player to feature in a World Cup game (36y 53d) as well as the country’s all-time joint-highest goal-scorer (51) alongside Thierry Henry.

Undervalued and often perceived as a lesser forward than many of his fellow teammates, not the least, the now-injured Karim Benzema, Giroud has been a silently constant and assuring presence in Didier Deschamps’ French era. Putting in his shifts, ticking along, and now he stands tallest on France’s tallest tower alongside arguably their greatest player. He’s achieved the hard worker’s pipe dream of social mobility.

In the end, it was a resounding win for Deschamps’ team but it is also worth noting that the Socceroos, given their footballing abilities and resources, understandably sat deep and focused on protecting what was theirs rather than trying to rip open the French. Their xG of 0.47 proves the point.

Yet, there were moments in the game, such as Benjamin Pavard’s lack of positional awareness for the first goal, Hernández’s sloppy pass in his own half, Jackson Irvine hitting the post at the stroke of halftime, among others. In general, the regularity of midfield turnovers in the first half can be a cause of worry for Les Bleus.

Because of France’s dearth of midfield options, a shift to 4-2-3-1 to maximise Les Bleus’ attacking options while limiting midfield ones made sense, and functioned well in this match-up. But the verdict on this system is still in-process as we wait to see how it fares against opponents who can ask more challenging questions from the French midfield and backline.