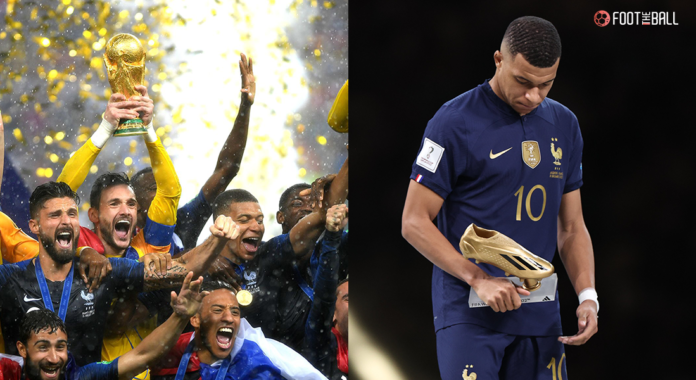 Ultimately, it was the minutest difference that separated France from making history. At the Lusail Stadium, Argentina won their third title when Gonzalo Montiel scored the winning penalty. But on the sideline, the French were in tears, knowing they had failed to do one of the rarest feats in World Cup history.

Les Bleus were just close to becoming the third team since Italy and Brazil to defend their title. And for some time, it looked as if France would do just that before Argentina stole their spotlight to help Lionel Messi finally win his first World Cup.

However, despite that, France could be proud of their efforts. In fact, they are the first team in 20 years to reach back-to-back finals, which shows how difficult a feat it is.

Kylian Mbappe, Olivier Giroud, Ousmane Dembele, Raphael Varane, Hugo Lloris and the rest of the French squad could retire today and still be considered legends. Such is the magnitude of Les Bleus’ achievement.

However, this squad only emerged after a while. In fact, France would endure multiple heartbreaks before they would become the force they are today.

So, how did France went from also-rans to world-beaters?

France had reached the final of the 2006 FIFA World Cup, with what was the last World Cup for their golden generation that had won the 1998 FIFA World Cup and 2000 Euros. However, with their retirement, there came a shortage of world-class talent. They had qualified for the 2010 World Cup via a play-off win over Ireland with a handball goal from Thierry Henry.

The team was far from perfect but had managed to qualify for the World Cup. However, what followed was one of the worst campaigns in their football history. The French started their match with a 0-0 draw against Uruguay. But things began to go downhill after they lost to Mexico in their second match.

This caused massive resentment in the squad and the players. Striker Nikolas Anelka criticised coach Raymond Domenech for his tactics and was sent home. As a result, the French players did not take part in training for one day.

And their humiliation was complete as hosts South Africa defeated them 2-1 in the final match. Heads began to roll as Domenech was removed. Even Jean-Pierre Escalettes, the then President of the French Football Federation (FFF), also resigned.

By the time France arrived for the 2014 FIFA World Cup, they had a far better squad. In addition, they also started developing a young crop of players that, just four years later, would deliver them their second World Cup. Hugo Lloris, Paul Pogba, Antoine Griezmann, Raphael Varane, and Blaise Matuidi were all part of it.

And the team started their campaign brilliantly, scoring eight goals in the group stages. They defeated Nigeria in the round of 16. However, their journey ended in the quarter-finals when they lost to Germany, which had their own golden generation.

However, the manner of defeat prompted criticism of Didier Deschamps’ tactics. After falling behind in the 13th minute to a Matt Hummels header, France barely attempted to equalise.

Euro 2016- Another tragedy in Paris

France’s next assignment was the 2016 Euro which was being held on their home soil. By then, French’s golden generation was in its final stages as new stars such as Samuel Umtiti, Kingsley Coman, and N’Golo Kante joined the squad.

And just like the World Cup two years ago, France won their group. However, from there, they started to grow into the tournament. Les Bleus defeated Ireland (in the round of 16), Iceland (in the quarter-final), and Germany (in the semi-final) en route to the final. The star of the show was Antoine Griezmann, who scored six goals and provided two assists.

Other top performers were Olivier Giroud (three goals, two assists) and Dimitri Payet (three goals and two assists). France were by far the best team in the tournament and were heavy favourites going into the final against Portugal.

However, in a packed Stade de France, Portugal, even without their talismanic striker Cristiano Ronaldo defeated the hosts courtesy of an extra-time goal from Eder. This was a shock loss for France, with players unable to get over the grief it brought.

Antoine Griezmann won the Player of the Tournament, but France endured yet another heartbreak.

Coach Didier Deschamps used the loss in the Euro final to galvanise his players for the 2018 World Cup. And France arrived in Russia with perhaps the best team in the tournament. It was a team that had the perfect balance of experience and youth.

Among the newest stars of the team were the 19-year-old Kylian Mbappe and 21-year-old Ousmane Dembele. Others to emerge were their full-back pairing of Lucas Hernandez and Benjamin Pavard. In addition, France had a squad that boasted players such as Varane. Umtiti, Matuidi, Pogba, Kante, Griezmann and Giroud.

The French started their journey with two wins and a draw. However, that did not prove to be a blessing for them as they were handed the most formidable opponent in Argentina. The two teams met in the Kazan Arena. France took the lead early before Argentina scored two goals to go into the lead at half-time.

The French struck back, with Pavard scoring the goal of the tournament before Mbappe’s brace put the match beyond Lionel Messi and Co.

France easily won their next match against Uruguay with goals from Varane and Griezmann. However, then came their most challenging assignment. Apart from France, Belgium also had their best team in history, eliminating Brazil in the quarter-final.

And the match was tightly contested with few clear-cut chances. However, the game’s only goal came in the 51st minute when Umtiti got on the end of the corner to give his team the lead.

Going into the final, fans still remembered the Euro loss against Portugal. Even Didier Deschamps acknowledged that his players were still not over the loss. “Two years ago, I remember what happened two years ago. We will go into this final to win it, as we have still not gotten over the (2016) final,” Deschamps said before the final.

France faced Croatia in the final. The team led by the enigmatic Luka Modric had won every knockout match either on penalties or in the extra-time. Moreover, Croatia had perfected the art of dragging their team down with their impressive defence before trying them out and defeating them.

However, in the final, France showed why their class and as they opened the scoring in the 18th minute. The Vatreni equalised but a penalty awarded after a VAR review got France their lead before half-time.

Any hopes the Croatians had of a comeback were quickly dashed away through two brilliant goals scored by Pogba and Mbappe. And after years of frustration and heartbreaks, France won their second World Cup title delivered to them by their golden generation.

At the 2022 FIFA World Cup, one of the first jobs France had at their hands was to break a curse. Since 2010, every defending champion had been eliminated in the group stage. Italy in 2010, Spain in 2014, and Germany in 2018 had all fallen prey in the first round.

To make matters more complicated, the team were also without their star midfield duo of N’Golo Kante and Paul Pogba. This means the baton in the midfield was passed to players such as the young star Aurelien Tchouameni and the experienced Adrien Rabiot. France also had new stars, such as Dayot Upamecano, Marcus Thuram, Eduardo Camavinga, Ibrahim Konate, Jules Kounde, and Theo Hernandez.

France didn’t care much for the curse as they again topped their group with two wins over Denmark and Australia. In the round of 16, France defeated Poland with two goals from Mbappe and one from Giroud.

Standing next in line in the quarter-finals were England, who themselves were a force to reckon with Tchouameni opening the scoring. However, England equalised in the second half before Giroud brought his considerable game experience to give them the lead again.

England’s persistence won them another penalty, but Kane blazed the ball high into the stands. France held on for the remainder of the game and went into the final four.

And waiting for them in the semi-finals were Morocco, a team that had faced Belgium, Spain and Portugal and still didn’t concede a goal. The Africans had mastered the art of resolute defending and had the brilliant Yassine Bounou saving everything thrown at him. In fact, the only goal they conceded was an own goal.

The match was, in a way, a rematch of the Croatia match four years back. In addition, France were also without the services of star defender Dayot Upamecano and Adrien Rabiot. However, such was the depth of the French squad that they had adequate replacements in the form of Youssouf Fofana and Ibrahim Konate.

And it took France only five minutes to break Morocco’s defence as Theo Hernandez volleyed the ball into the net. Morocco, who were never behind in the World Cup, came hard, but the impressive Lloris in goal ensured France’s lead remained intact. Substitute Randal Kolo Muani added another to put the match beyond Morocco’s reach.

This took them one step near to their dream of defending their title. And in one of the best finals ever played in the World Cup, France came down from 2-0 to level the match in the final minutes to take the game into extra time. Then, after falling behind one more time, they fight back.

However, France lost on penalties to lose the final in the cruellest manners. Lionel Messi and Co. went home with the trophy, while the French returned home knowing they were on the cusp of becoming one of the best teams ever in World Cup history.

But still, France have managed to do what few teams have managed. And make no mistakes; with several of their players yet to hit their prime, they will be one of the favourites to win the title in 2026.