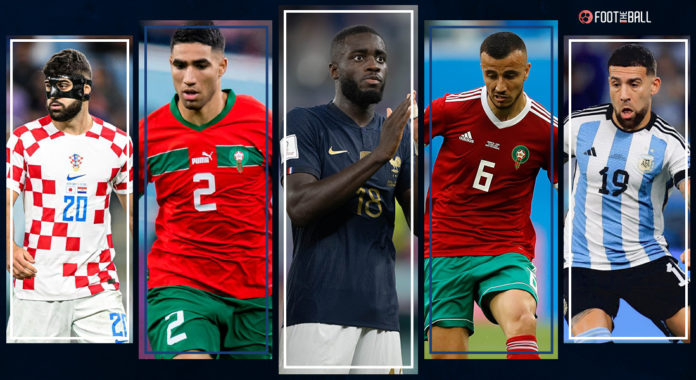 All of these had one thing in common, resolute defending. The defenders were in no mood to make the attackers’ lives easy. Several of the upsets were based on this approach.

In fact, Croatia and Morocco’s semi-final journey were heavily reliant on the art of defending. However, even the big teams such as France and Argentina had to defend for their lives. On the other hand, teams such as Brazil and England were only knocked out because they failed to close out a game by making sure they didn’t concede.

Morocco were the fairytale journey of this World Cup as they made an incredible run that took them to the semi-finals. With this, they became the first African team to reach the final four of the tournament. One of the key reasons behind their success was their defence.

And Nayef Aguerd was an integral part of Morocco’s backline. The 26-year-old formed a solid defensive partnership with captain Romain Saiss and helped the team keep three clean sheets (two in the group stages, in the round of 16 against Spain).

While he didn’t play the quarter-final and semi-final due to injury, his replacement Jawad El Yamiq did a commendable job.

In the Morocco squad, there is no better player in terms of skill, quality, and talent than right-back Achraf Hakimi. The defender plied his trade for Paris Saint Germain and was under pressure to deliver. And deliver he did.

Hakimi formed a brilliant partnership with right winger Hakim Ziyech which formed the crux of Morocco’s attacks. He kept attackers such as Joao Felix, Dani Olmo, Thorgan Hazard and Ivan Perisic at bay.

His presence also had a calming effect on the team, which ensured that other players also played at their best. One of the examples of this was his impressive Panenka winning penalty against Spain in the round of 16.

In 2018, when France won the World Cup, Lucas Hernandez was the designated left-back. This time, though, his younger brother Theo has taken up the mantle. The AC Milan man has been brilliant, scoring one goal and providing two assists. He has also formed an explosive partnership with Kylian Mbappe on the left.

He was the first opposing player at this World Cup to score past Yassine Bounou in Morocco’s goal. In addition, no defender in the World Cup has provided more assists at the tournament than the 25-year-old.

The third Moroccan on the list, Romain Saiss, has been the heart of the Atlas Lions’ defence. The 32-year-old made 57 clearances at the tournament, the most by any player at the World Cup. This was the theme behind Morocco’s impressive tournament run as they repeatedly frustrated their opponents.

And Saiss did all this while not being fully fit in several matches. In fact, he had to be stretchered off during their win over Portugal in the quarter-finals. And while he did play in the semi-final, his injury resurfaced, and he was substituted in the first half.

Croatia’s journey from minnows to a footballing power serves as an inspiration in the sport. After reaching the final in 2018, the Vatreni made another incredible run reaching the semi-finals en route to beating favourites Brazil.

And Josko Gvardiol was an integral part of this. The 20-year-old is one of the best young defenders in the world and brought his form to the World Cup. He was a rock in the Croatian defence, helping them keep two clean sheets in the group stage.

France had arrived with the best defenders in the World Cup. The French roster included Benjamin Pavard, Raphael Varane, Jules Kounde, William Saliba, Lucas Hernandez, Theo Hernandez, Ibrahima Konate, and Dayot Upamecano. However, despite such defensive brilliance, Deschamps opted for Upamecano as one of his starting centre-backs.

And Bayern Munich didn’t disappoint, helping France keep the opposition at bay. And while France only kept one clean sheet in the World Cup, it was due to their high-pressing style of play that left their defence often exposed. The defender was among the best at the World Cup by that marker.

When the Netherlands arrived at the World Cup, they were a team that was heavy on defence. However, under Louis van Gaal, the Dutch were hoping to repeat their 2014 heroics under the same coach. And the Dutch made an impressive run to the quarter-finals losing to Argentina on penalties.

During their entire run, Denzel Dumfries was one of their best players. Playing in his preferred right wing-back position Dumfries created havoc on the right wing. He scored one goal and provided two assists which showed how instrumental he was to the nation during the tournament.

While most plaudits for Argentina’s incredible World Cup campaign have been attributed to Lionel Messi, Nicolas Otamendi has been the silent assassin in La Albiceleste’s defence. He formed a solid defensive partnership with Christain Romero that helped Argentina navigate the World Cup campaign.

Otamendi has made seven successful tackles, the third-most by any defender at the World Cup. In addition, he also made 46 clearances, the fourth-most by any player, which shows just how important he was to the team.

Dejan Lovren may not have the best of club careers. However, for Croatia, the defender was a beast. The former Liverpool man was the heart of Vatreni’s defence for the 2018 and 2022 World Cups. At the age of 33 years, Lovren forged a strong partnership with Josko Gvardiol that helped Croatia keep two clean sheets in the group stage.

He made 46 clearances, the fifth-best in the tournament. In addition, he made five interceptions, second only to his partner Gvardiol. And while all the praises of Croatia’s incredible journey went to players such as Luka Modric, Ivan Perisic, Dominik Livakovic, and Gvardiol, Lovren was the silent leader of the backline.

Before the World Cup, there was intense speculation about whether Lisandro Martinez would start after his impressive performances for Manchester United. However, Lionel Scaloni opted for Christian Romero and Nicolas Otamendi as his starting centre-backs. Romero lost his place in the next match after their shock loss to Saudi Arabia.

However, since then, he has played every match and has been a top performer. The Tottenham man has played 360 minutes, far less than many defenders but still ranks among the top. He ranks sixth among successful tackles, sixth among dribblers stopped and fourth among interceptions showing his importance to the team.