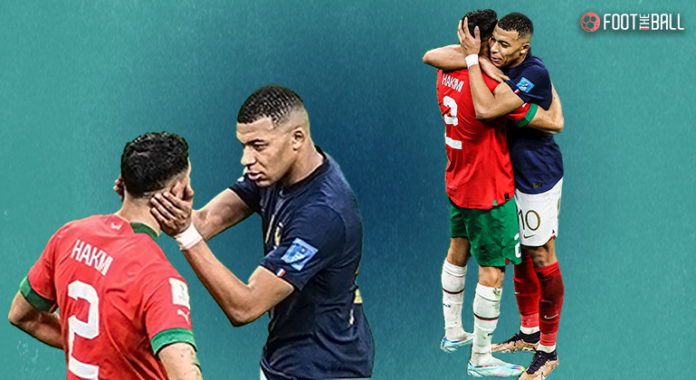 Riding on a brilliant display from Kylian Mbappe, France reached their second consecutive World Cup final after beating Morocco 2-0 in the second semi-final. Theo Hernandez and Randal Kolo Muani were on target for Les Bleus, as an opponent finally beat Morocco’s famed defence.

With this win, France will now face Argentina, a team they eliminated in the round of 16 in the previous World Cup. Meanwhile, Morocco will now play in the third-place playoff against Croatia.

Before the start of the match, Morocco had not conceded any goal from an opponent in the entire World Cup (they only conceded an own goal). However, it took France only four minutes to breach Morocco’s defence. The move started when Varane’s pass reached Antoine Griezmann after a horrendous slip by Jawad El Yamiq. Griezmann squared the ball to Mbappe, who failed to score in two attempts. Fortunately for France, the ball reached Theo Hernadez, who volleyed the ball past Yassine Bounou.

France kept the pressure on and almost scored through Giroud, who only managed to hit the post. To make matters worse, Morocco lost their captain Romain Saiss to injury in the 20th minute.

However, Morocco did have a chance of their own as El-Yamiq’s bicycle kick hit the post in the dying minutes. In between all these, Sofiane Boufal was also booked for a challenge on Theo Hernandez.

In the second half, Morocco came out all guns blazing pressing France in their half. And they had two brilliant chances within seconds to equalise in the 54th minute but failed to do as the French backline held its nerves.

On the other end, Mbappe also got a clear run to the goal, but a last-ditch tackle from Amrabat spared Morocco’s blushes.

However, after seeing his team struggle to get past the halfway line, Didier Deschamps sent Marcus Thuram on for Giroud. Meanwhile, Morocco made a double substitution sending in Zakaria Aboukhlal and Abderrazak Hamdallah to replace Boufal and En-Nesyri.

Morocco still kept the pressure on and could have gotten their goal after Abderrazak Hamdallah went past two defenders but instead of shooting tried to go past a third defender who snuffed out the chance. This was the Atlas Lions’ best chance, and not scoring it had disastrous consequences for them, as they conceded soon after.

Mbappe, who had dominated the game, showed his best skills to bamboozle past two defenders before shooting. The ball hit Abde Ezzalzouli and fell into the path of Randal Kolo Muani, who slotted the ball past Bounou.

4 – France have reached the World Cup final four times in the last seven editions of the tournament (1998, 2006, 2018 and 2022), at least twice more than any other nation over the period. Arrogance. pic.twitter.com/sF6v4GhUpg

In the 2018 FIFA World Cup, Mbappe won the World Cup and was voted the best young player. This time he is set to win it again while being voted as the tournament’s best player. While Mbappe didn’t score any goal or assist, his initial action was the reason behind the two goals. For the first, it was his shot whose deflection fell kindly to Theo Hernandez.

However, it was the second goal where Mbappe was at his best and though he did not get the assist as the ball had hit a defender before Kolo Muani scored in an empty net.

Morocco were the fairytale journey of this World Cup as they defeated Belgium, Spain, and Portugal to reach the semi-finals. And they did it while playing good football, ably supported by an impressive defence. However, their luck ran out against France as they conceded within four minutes. This put them on the back foot as they had to chase the match from the beginning, something they had not done. In fact, it was the first time they were trailing for the first time in the tournament.

They had chances, but the nerves associated with big games got to them. However, they can go with their head held high and have a final match against Croatia in the third-place playoff.

Before the game, FootTheBall had selected the Frenchman as their game-changer, and the 23-year-old didn’t disappoint. While he didn’t get on the scoresheet, he did create both goals for his team. In addition, he kept Achraf Hakimi busy on the right flank and, on many occasions, just ran past him.

Throughout the tournament, Morocco used their right flank combination of Hakim Zieych and Hakimi to devastating effect. It was what helped them eliminate Spain and Portugal in the knockout. However, with a player of Mbappe’s quality on the wings, Hakimi’s attacking contribution was limited compared to other matches and helped France win the game.