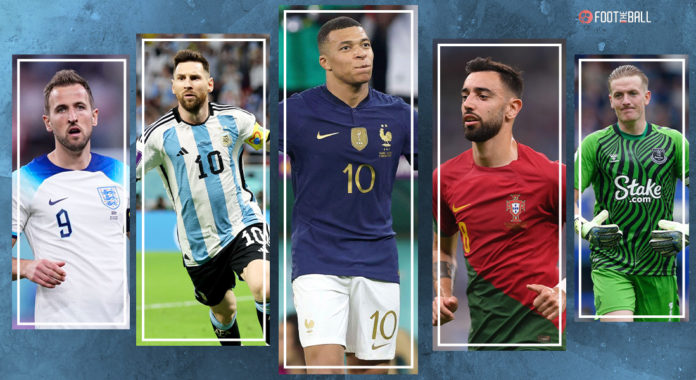 The 2022 FIFA World Cup has given us a lot of surprises. We have seen underdogs such as Saudi Arabia, Japan, North Korea and Morocco defeating the top teams. Meanwhile, top teams such as Germany and Belgium were also knocked out in the group stages. And with the round of 16 almost done, we have seen some players rising to the occasion.

Some of the players who have been the top performers were well-known and world-class before the tournament. However, others were young talents who have finally taken the next step. So, here are the statistics for the 2022 FIFA World Cup.

No player at this FIFA World Cup is in better form than Kylian Mbappe. The PSG man has been the star for Les Bleus and was the World Cup’s top-scorer with eight goals to his name. Mbappe scored three goals in the group stages, helping France top the group. He then followed it up with a brace against Poland. Mbappe’s form kept growing and it all came down in the final where he scored a hattrick, becoming the second player ever to do so.

This could have been the year Lionel Messi finally broke his World Cup jinx. Messi has been the star who has run the show for the Albicelestes. The Argentine scored 7 goals to help his country win the third title.

Before the World Cup, Messi had never scored in the knockout of the FIFA World Cup. However, all that has changed in Qatar, where he has added three goals, one each in the round of 16, quarter-final, and semi-final and a brace in final which helped Argentina win their thrid World Cup title.

In the last four months, Manchester City’s main striker Erling Haaland has received all kinds of praise. However, the Norwegian is not in the World Cup. His deputy at the club, Julian Alvarez, though, is having a tournament to remember. Before the World Cup, Alvarez was behind Lautaro Martinez in the pecking order and started the first two matches on the bench.

Lionel Scaloni gave him a starting role for the third match, and the winger has not looked back since. Alvarez has raced to four goals, one less than Lionel Messi and Kylian Mbappe. He was at his best in the semi-final, where he scored a brace to help Argentina demolish Croatia.

If France is a team of superstars, then Olivier Giroud is the hard worker that acts as a glue that keeps the team together. The Frenchman has been an influential player for France and became the nation’s top goalscorer after scoring in the round of 16 against Poland. He added another, which ultimately turned out to be the winning goal against England in the quarter-finals. Giroud has scored four goals but was unceremoniously subbed off in the first half of the final after failing to make an impression.

Cody Gakpo was an impressive talent even before the 2022 FIFA World Cup began. However, in Qatar, he has taken his form to the next level as he has been the lone star for the Netherlands in the attack. Gakpo has scored in all three group games helping his nation top their group.

Lionel Messi: Could this be Messi’s year? After their first match loss to Saudi Arabia, Argentina look like a changed side. And much of it has been down to Lionel Messi. The Argentine is hands down having his best-ever World Cup scoring five goals and providing three assists.

His latest assist, which came against Croatia in the semi-final, was a work of art. Messi took the ball from the right and, just after tussling with Josko Gvardiol, left the young defender stunned by tricking his way past him before slotting the ball to Julian Alvarez, who scored his second of the night.

Antoine Griezmann: While Kylian Mbape and Olivier Giroud are banging in the goals, the likes of Antoine Griezmann are creating them. Didier Deschamps opted for a two-person midfielder for France solely for the reason that Griezmann could play, and that too in a free role. And he has repaid the faith with three assists, the joint-most in the World Cup till now. His best performance came against England, where he bagged two assists to help France win the match. With this, he overtook Zinedine Zidane and Theirry Henry to become France’s all-time top assist provider.

Harry Kane: While the top English striker may have only scored one goal, he has been on top of his creative game. Kane has provided three assists so far, the most by any player in the 2022 World Cup till now. So, while other attackers are receiving plaudits for scoring goals, Kane is creating them. And if he can add goals to his game, England will be more than a match for any team they face.

Bruno Fernandes: Portugal are a force to be reckoned with as they just showed the peak of their power by thrashing Switzerland 6-1. The team has been one of the in-form teams at the World Cup, and Bruno Fernandes has been their star orchestrator. With three assists and two goals, he remains their most effective player. His impeccable passing and defence-splitting through balls have caused the opponents plenty of trouble, and if he can keep this form, then Portugal look likely to win their first World Cup title.

27 – Antoine Griezmann now has 27 assists for France, the most for any player for the national team over the last 50 years (Thierry Henry and Zinedine Zidane 26). Gifts. pic.twitter.com/dZuyAAt1Cb

Ivan Perisic: Croatia’s incredible journey to their second consecutive semi-final had many heroes. One of them was Ivan Perisic. The Inter Milan man provided three assists in the tournament, helping Croatia to a third-place finish. Perisic was the best attacker in the side and was routinely the aim of Croatian defenders when they were looking to get the ball as far away from the goals as possible.

Emiliano Martínez: While everyone has been focusing on Lionel Messi, who might be playing his last FIFA World Cup, Emiliano Martínez has also been a revelation for the Albicelestes. The Aston Villa man was picked by Lionel Scaloni ahead of Villareal’s Geronimo Rulli and has been in brilliant form. After their shock loss against Saudi Arabia, Martinez kept two clean sheets in the next two group matches to help Argentina qualify for the round of 16. His third clean sheet came against Croatia in the semi-final, where his team won 3-0.

Yassine Bounou: Morocco are on a dream run at the World Cup. The Atlas Lions created history by beating Portugal 1-0 to become the first African team ever to reach the tournament’s semi-finals. And though Youssef En-Nesyri scored the winning goal, it was their Yassine Bounou who was the star of the match. The man who plays his club football in Sevilla has been perhaps the most in-form shot-stopper in Qatar. And with three clean sheets, he ranks top, along with England’s Jordan Pickford.

Jordan Pickford: Before the FIFA World Cup, many called Aaron Ramsdale to be made the number one goalkeeper for England. However, manager Gareth Southgate kept his faith in the Everton man, and he has rapid his faith with three clean sheets, the most in the World Cup till now. These clean sheets came against the United States, Wales and Senegal.

Alisson Becker: While he may not have had a perfect season with Liverpool, Alisson has been the ideal number one for Brazil at the 2022 FIFA World Cup. Tite picked the Liverpool man ahead of Manchester City’s Ederson, and the shot-stopper has repaid the faith by making crucial saves to keep the Selecao in the game. His clean sheets came against Serbia and Switzerland.

Pickford has 9 clean sheets in major tournaments for England and is only behind Peter Shilton who has 10👏 pic.twitter.com/FF688Fyoqz

Dominik Livakovic:  There is just something about the World Cup that brings out the best in a Croatian goalkeeper. In 1998, it was Drazen Ladic; in 2018, it was Daniel Subasic; and now, in 2022, it is Dominik Livakovic. The shot-stopper from Dinamo Zagreb has been brilliant in Croatia’s goal. His two clean sheets against Morocco and Belgium helped Croatia clinch second place. And in the round of 16, his three penalty saves helped Vatreni defeat Japan.

For all the updates on the 2022 FIFA World Cup follow FootTheBall.