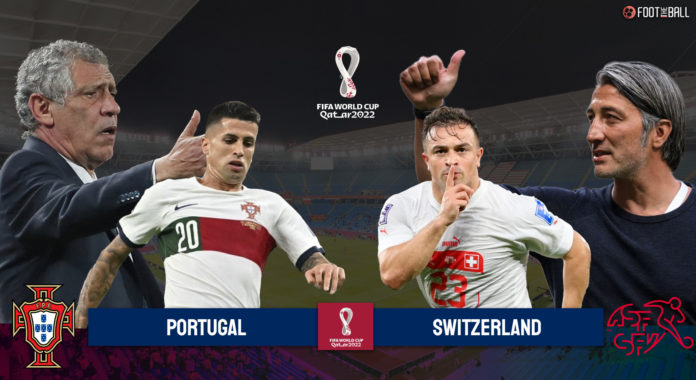 In the final tie of the Round of 16, Portugal will take on Switzerland at the Lusail Stadium on Tuesday, with both sides aiming to reach a territory they haven’t charted for a considerable period of time.

Going into their final game against South Korea, with qualification already guaranteed, Fernando Santos’ side required only a solitary point to confirm their status as Group H winners. While they could not avoid the pangs of defeat, Ghana’s loss ensured that Portugal secured the top spot.

Having hit the ground running and won their first two matches in the group stage, Santos had the privilege of resting his prime players and fielding a second-string side in Portugal’s final fixture, which they dramatically lost in injury time to South Korea.

Generally in this campaign, Portugal’s defence has not been an embodiment of an unbreakable brick wall, and a cumulative xGA – Expected Goals Allowed – of 3.9 also does not reflect too favourably on the Selecao.

But they’ve been readily bailed out by their attacking prowess, which has been flowing with gusto, especially in the first two games. Six goals scored in three games, with an xG of 4.6, Santos would be wishing that his side maintain their conversion rate.

Portugal have advanced out of their group for the fourth time in the last four major tournaments but the fact that the Selecao have not reached the last 8 in the world cup since 2006 must feel like a super annoying inch they’ll be dying to get rid of.

On the other hand, Switzerland finished level on points with the favourites-to-win-the-title Brazil in Group G. Their golden generation of football, now under the stewardship of Murat Yakin, just keeps on giving.

In the process of progressing to the next stage for the fifth time in five major competitions since 2004, the Rossocrociati played one of the games of the tournament – yes, there have been many!

A do-or-die affair for both parties involved, neither the Serbs nor the Swiss held back. There were 15 shots before the whistle blew for the first half! From start to finish it was a high-intensity, high-action, basketball-style game that was settled by Remo Freuler’s 48th-minute winner, a team goal brimming with pizzazz that was wholly worthy of taking the Swiss to the next round.

Moreover, Switzerland would take heart from knowing that they were evidently the dominant side, especially in the second half, in both their victories, as well as for holding their own against Brazil and keeping them at bay for almost the entirety of the game.

With a real chance of reaching the last eight for the first time since 1954, Yakin would be urging his players to take inspiration from recent and (relatively) ancient history as the Swiss defeated Portugal 1-0 in their most recent encounter in the Nations League as well as getting the better of them 2-0 at Euro 2008 in what was their only previous clash at a major tournament.

It’s difficult to be a star in a team that also boasts of Cristiano Ronaldo but if anyone knows how to achieve that, it’s Bruno Fernandes. The 28-year-old attacking midfielder has been in a kind of sublime form that also elevates the level of his teammates.

A leader figure on and off the pitch, there have been times in this world cup campaign when Fernandes has dragged, carried, uplifted, and inspired Portugal’s attack. With two goals and assists a piece, it’s no wonder that he’s Selecao’s top goalscorer and assist-maker. He’s also leading the xA (0.4) charts for his team.

Pacy and powerful, Switzerland’s number 7 is like a magnetic force on the football pitch, especially in and around the box. Whether he ends up putting the ball in the net or not, exciting things happen around him.

Having overtaken Haris Seferovic as the leader of the pack, Embolo has been walking the talk in Qatar till now. The 25-year-old Monaco man is the Rossocrociati’s leading goalscorer (2) and has an xG of 2.21, by far the highest in the team.

Giroud just had to attempt that one 😆🚲#France #FRA #WorldCup pic.twitter.com/jeqHYwKOc3

The biggest blow for Portugal in this campaign, injury-wise, came when PSG left-back Nuno Mendes was ruled out of the World Cup due to a thigh injury he sustained against Uruguay. His club teammate, Danilo Pereira, also has injury doubts looming over him, as he damaged his ribs during a training session.

Otavio, who missed the last two games because of muscular discomfort, is however getting closer to first-team action.

The reliable Swiss goalkeeper Yann Sommer alongside one of his defenders, Nico Elvedi, didn’t feature in the thriller against Serbia through illness. They should be nearing their return and available for the tie.

Too often the Swiss have shown that they cherish the underdog tag in the biggest of the matches and are not afraid of punching above their weight. In what threatens to be a highly attacking, open game, Yakin’s side might kill another giant in a world cup where giant killing has been a regular feature. FootTheBall predicts a 3-2 win for Switzerland.