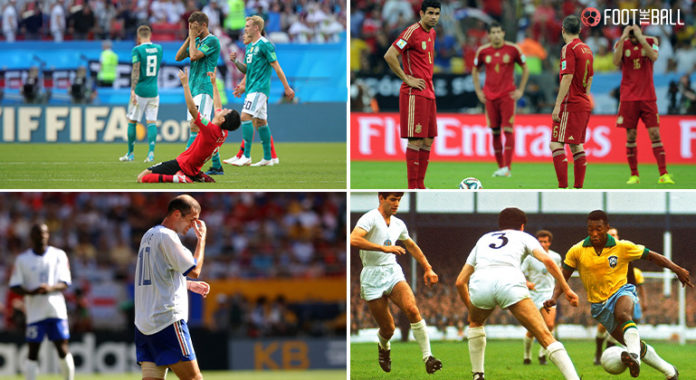 Since its inception, the FIFA World Cup has been dominated by a select few teams from Europe and South America. In fact, only eight teams have won the FIFA World Cup in the last 21 editions, which shows how hard it is for a new team to make it deep into the tournament. However, the World Cup is such a tough tournament that even the best teams can falter.

And especially in the last two decades, we have seen top teams getting eliminated. Every team has been on the receiving end of the early exit curse at the FIFA World Cup, from Germany to France to Spain and Portugal. Some of these teams were stacked with generational talent, which made their exit even more surprising.

So, here’s a look at the most shocking exits in FIFA World Cup history.

Spain were one of the dark horses in the 1998 FIFA World Cup. The Las Rojas boasted a side that boasted the talents of Raul, Fernando Hierro, Fernando Morientes, Luis Enrique, Andoni Zubizarreta and Ivan Campo. La Furia Roja were in top form coming into the tournament. Spain had topped their UEFA qualifying, winning eight and two draws to top their group unbeaten.

Spain were drawn into Group D with Nigeria, Paraguay, and Bulgaria. On paper, Spain were by far the strongest team in the group and were expected by many to qualify and top the group. However, Spain’s first match was against Nigeria, and though the Europeans were the favourites, they succumbed to a shock loss as Nigeria scored two goals in the last 17 minutes to win the match 3-2.

Paraguay held Spain to a goalless draw in the next match. This meant that Spain were on the verge of elimination and needed their best for their last game against Bulgaria. And they did bring their best, thrashing their rivals 6-1. However, Paraguay’s 3-2 win over Nigeria meant they finished third in the group and were eliminated.

Spain’s next heartbreak at the FIFA World Cup would come just 16 years later. However, this time the Spanish team was far superior to their peers in 1998. The team had won the previous World Cup, the first for the nation. Moreover, the 2011 champions were stacked with world-class talent who were legends of the game.

And several of these players returned to defend Spain’s crown in Brazil. Their first match would ironically come up against the Netherlands, their 2010 World Cup final rivals. After taking the lead, the Netherlands returned strongly, scoring past a hapless Iker Casillas.

However, Spain were still alive in the tournament, but the next match would change that all up. Up against Chile, Spain looked all at sea, losing the game 2-0 and crashing out of the tournament. This was a shocking result as Spain had won the three previous international tournaments; the 2008 Euro, 2010 FIFA World Cup, and 2012 Euro.

Finally, France breaks the champion's curse. 𝙇𝙚𝙨 𝘽𝙡𝙪𝙚𝙨 makes the knockouts for the first time since 2002 after the last 3 defending champions failed to do so.

Four years after Spain’s exit from the 2014 World Cup, another defending champion would follow the same route as Germany were knocked out in the 2018 FIFA World Cup group stage. But, like Spain, Germany also boasted several players who had won the World Cup title. And on paper, Germany were one of the favourites to defend their crown.

In the UEFA qualifying phase, Die Mannschaft were the only team with a 100 per cent winning record. The Germans were drawn into Group F with Mexico, Sweden, and South Korea. And their campaign started on a negative note when they lost to Mexico. In their next match, Germany were almost on the verge of sharing the spoils with Sweden before Toni Kross scored with perhaps the last kick of the game.

This made the equation simple for the team’ to win the match and qualify. However, in one of the biggest shocks of the 2018 FIFA World Cup, South Korea defeated Germany 2-0 to knock them out. This was also the third straight World Cup, where the defending champions were eliminated in the group stage.

Germany in the 2018 FIFA World Cup

Germany in the 2022 FIFA World Cup

The elimination of France at the 2002 FIFA World Cup is shocking for two reasons. First, the team had several players that had won the previous World Cup on home soil. However, what makes this story even more shocking is that several players of the 2002 team helped France to get to the World Cup final four years later in Germany.

The team that arrived for the 2002 FIFA World Cup had brilliant players such as David Trezeguet, Emmanuel Petit, Thierry Henry, Zinedine Zidane, Marcel Desailly, and Claude Makelele. With a squad like that, Les Bleus were expected to be among the favourites to defend their title.

France were drawn into Group A with Senegal, Uruguay and Denmark. However, in their first match, the defending champions succumbed to a shock 1-0 loss to Senegal. In their next game, they were held to a goalless draw by Uruguay, which meant that even if they won their last match, they would not be guaranteed qualification. However, it didn’t matter as Denmark completed their humiliation by defeating them 2-0. On top of that, France didn’t score a goal, an unwanted record they shared with China and Saudi Arabia.

Brazil, led by the enigmatic Pele, won the FIFA World Cup three times between 1958-1970. This included their title wins in 1958, 1962 and 1970. And it is this reason that makes their elimination in the 1966 World Cup group stage one of the most shocking exits in FIFA World Cup history.

After experiencing heartbreak in 1950, Brazil came back strongly to win the 1958 and 1962 FIFA World Cups. Again, Brazil came with a strong squad that were heavy favourites to bring Brazil their third straight title.

The Brazil team featuring Pele prepare to leave Manchester Piccadilly station for London having been eliminated from the 1966 World Cup.#Pele pic.twitter.com/Pf9g5ix5vS

However, that humiliation only made Brazil stronger as they came back four years later with a team considered by many to be the best team in FIFA World Cup history.