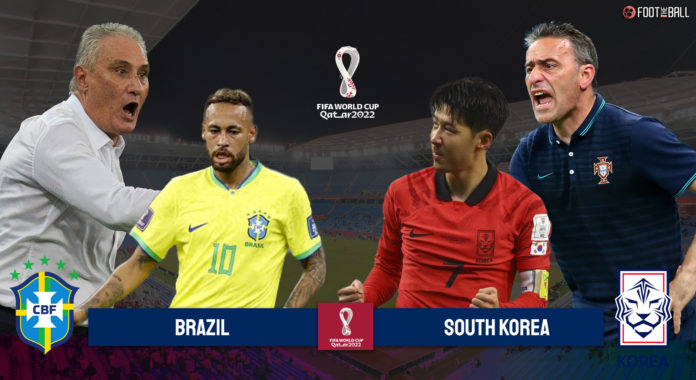 Having progressed into the knockout stage for the ninth consecutive occasion, Brazil will confront South Korea, who have advanced to the last 16 for only the third time, on Monday at Stadium 974 in Doha.

Brazil’s world cup campaign began with a comfortable victory 2-0 over Serbia, thanks to a rhythmic second half, with Richarlison putting the icing on the cake by scoring with an acrobatic bicycle kick in the 73rd minute.

The Seleção followed it with a get-the-job-done 1-0 win against Switzerland. However, Tite’s heavily-rotated side suffered an unexpected blip versus Cameroon as Vincent Aboubakar’s historic header in the 92nd minute broke Brazil’s nine-game winning streak alongside making the Indomitable Lions the first African team to beat the South American outfit in a men’s world cup.

Although the Seleção were wasteful in front of the goal in their last game, having failed to score despite taking aim 21 times, there is no need to press the panic button in the Brazilian camp. In their first two matches, when the pressure started building, Tite’s players responded positively and turned up the heat in the second half.

The five-time winner’s cumulative xG of 5.9 would also instil confidence, as it suggests that Brazil’s brand of football is opening enough avenues for them, they just need to be more clinical in front of the goal. Given the frightening quality in the team, one would expect them to step on the gas paddle as we go deeper into the tournament.

The progression of Paul Bento’s South Korea to the last 16, on the other hand, was no less than an emotional rollercoaster.

Needing a victory against group toppers, Portugal, the Taegeuk Warriors found themselves trailing by a goal in the 5th minute. They equalised in the first half but it was Hwang Hee-chan’s slick finish in injury time that transmitted a wave of ecstasy in all of South Korea, who finished level on points with Uruguay but qualified because they scored more goals.

From all three games, there are positives that the South Koreans would want to build on when they play their first knockout game since 2010 on Monday.

They showed great grit in completing the comeback against a depleted Portugal side as well as equalising against Ghana, even though Mohammed Kudus eventually scored the winner, while Uruguay too struggled to break them down.

Bento, who will also return to the sideline against Brazil, would have good reason to believe that, despite the grandeur of their adversary, his side would have a chance of killing another giant if they stay on their best behaviour.

The best news for the Seleção fans would be the reports suggesting that Neymar will return to the starting XI. Danilo, who sprained his ankle in the game against Serbia, should also find his way back into the squad.

This tie is going to be interesting 🥵🍿#Mbappe #ItsComingHome #WorldCup2022 pic.twitter.com/DYjhxtyg6e

In bad news, there are more injury troubles for Tite to cope with. Forward Gabriel Jesus and left-back Alex Telles have been ruled out of the tournament, while Alex Sandro, struggling with a hip injury, is also unlikely to make a return.

Fred, Bruno Guimarães, and Éder Militão will have to be mindful as they’ll be entering the game carrying yellow cards.

Kim Min-jae was rested as a precaution in the Portugal game, and would look to return and dictate the heart of South Korea’s defence.

Hwang Hee-chan, who was recovering from a hamstring issue and hence didn’t feature in the first two games, proved to be the game-changer against Portugal and would now be challenging for a spot in the playing XI.

Lee Kang-in and Kim Young-gwon limped off in the last fixture but too much shouldn’t be made of that.

There was a time, not too long ago, when the burden of Brazil rested solely on Neymar’s shoulders (and feet) but bygone are those days. Vinicius Júnior, who has prodigiously developed at Real Madrid, has brought his club energy to the world cup and shown glimpses of speed and grace on the left flank.

Having created the highest number of chances (6), with three of them coming through carries, Vinicius has been the Seleção’s creator-in-chief. He also assisted Richarlison’s wonder strike, which probably is the goal of the tournament so far.

Kim Jin-su, one of the best left-backs in Asia, had his heart broken twice as he missed the last two world cups due to injury. Having finally gotten his chance, the former Hoffenheim man has been a stick of dynamite on the left side of the field.

By whipping loopy crosses with his left foot from wide positions, he’s menaced many defenders in this campaign. He has the highest xA (0.64) in his team, has created the most chances (5), and is the joint-top assister (1). Fair to say, the 30-year-old is a creative hub for Bento’s side.

Looking at Brazil’s injury concerns, especially the fullbacks, Bento and his attackers would be rubbing their hands in anticipation. However, going forward, the quality and depth of the Seleção are such that they can offer a very soft and comfortable cushion to their defensive line.

Brazil might prove a mission too difficult for the South Koreans. FootTheBall predicts a 3-1 win for Brazil.