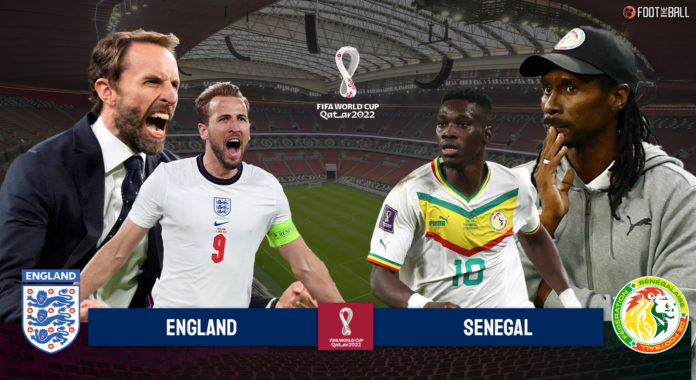 England’s quest for a second World Cup title is now up against African powerhouses Senegal as the two teams face in the round of 16 of the 2022 FIFA World Cup England qualified for the knockout round of the tournament after finishing top of Group B ahead of the United States, Iran and Wales. However, Gareth Southgate’s men have shown inconsistent form. Their campaign started impressively as they thrashed Iran 6-2 in the first match before sharing the spoils in an insipid draw against the United States. They ended the group stages with a 3-0 win over Wales.

England arrived in Qatar with a squad stacked with talent and one that could bring the World Cup home. In the attack, Marcus Rashford and Bukayo Saka have been in top form, scoring three goals and two goals, respectively. The duo have been perfectly complimented by their attacking partner Harry Kane who has provided three assists, the most till now.

Now they come up against Senegal, a proper dark horse who can not be taken lightly. Just before the World Cup, the Lions of Teranga suffered a massive blow as superstar Sadio Mane was ruled out of the World Cup. To make matters worse, they also lost their opening match against the Netherlands.

Why Germany Wear White Jersey Which Is Not Part Of Flag

The most shocking red cards in FIFA World Cup history

However, the African champions came back strongly drafting both Qatar and Ecuador. In the absence of Mane, several individuals have stepped up. This has made them a team with many players who can be a menace to the opposition. Manager Aliou Cisse has managed to alter his tactics, accounting for Sadio Mane’s absence.

Now they face their sternest test yet as England are a side in top form. And if they want to win the match, Senegal will need to play out of their skin.

Next up: England vs. Senegal 🍿🍿🍿 pic.twitter.com/0HhLLSyDfh

Gareth Southgate will have a selection headache when selecting a starting 11. Against Wales, Southgate rested Raheem Sterling, Bukayo Saka, and Kieran Trippier. With Marcus Rashford and Harry Kane guaranteed to start, the third spot in the attack will be between Saka, Phil Foden and Sterling. However, on the right back, Trippier is expected to replace Kyle Walker Meanwhile, Jordan Henderson is expected to keep his place in the team with James Maddinson and Kalvin Phillips still not completely fit. Harry Maguire and John Stones will be the central pairing unless Southgate opts for a three-person defence which paid rich dividends four years back.

Meanwhile, Senegal will be without their midfield star Idrissa Gueye who got his second yellow card against Ecuador and thus is suspended for the clash. This means that Leicester City’s Nampalys Mendy will deputise and need to bring his best. In addition, Cheikhou Kouyate has also not featured since sustaining an injury against the Netherlands.

However, the primary onus will be on goalkeeper Edouard Mendy and centre-back Kalidou Koulibaly to keep the English attackers at bay.

England was the joint-top scoring team in the group stages with nine goals. However, Harry Kane still has not scored one goal. While he has three assists to his name, Southgate would want his most experienced star to come good in the knockouts. If England win their match against Senegal, then there is a high chance they could face France. And England will need to take their chances against the defending champions, which are stacked with talent and will punish any mistakes from England. Kane was the top scorer four years back when England reached the semi-finals, and they will need goals from Kane if they are to win their second World Cup title.

For Senegal, their attacking stars, such as Ismaila Sarr and Iliman Ndiaye, have come to the party. However, against England, their main stars will be the duo of Mendy and Koulibaly, who will be tasked with containing the brilliance of English attackers. Senegal will spend most of the match in their half and need to thwart England and ply on the counter. This means that the Chelsea duo will need to be at their best.

England have failed to win the World Cup since 1966 despite producing some of the best footballing talents. However, this time they arrive with an excellent and experienced team. In the last four years, they have reached the semi-final of the previous World Cup and the final of the Euros. Now they would want to take the final step.

Meanwhile, Senegal have a brilliant squad that is the reigning African champion. However, in England, they have met more than a match.

FootTheBall predicts a 3-1 win for England.