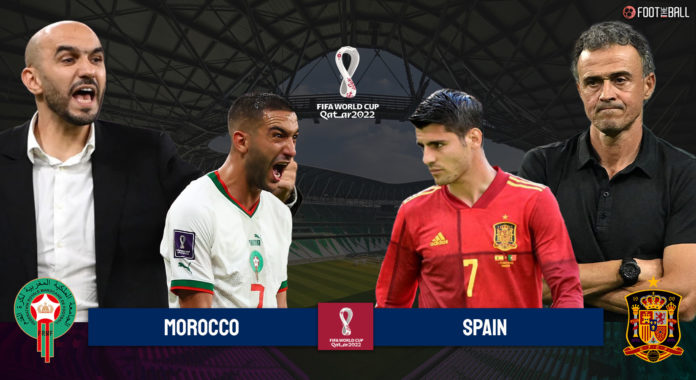 Morocco will be looking to write history by progressing into the quarterfinals of a men’s FIFA World Cup for the first time in their history when they take on Spain at the Education City Stadium in Ar-Rayyan on Tuesday.

Coming into the World Cup in Qatar, everyone knew what Luis Enrique’s Spain was about and how they would play. Then the World Cup commenced with the 7-1 drubbing of Costa Rica in a quintessentially Spain fashion, and everyone was – justifiably – in awe.

However, after matchday 1, cracks have emerged and their path to the next stage has been anything but straightforward. At one point in time, while La Furia Roja were facing the Samurai Blue, it even became a mathematical possibility that Spain were getting kicked out in the group stage.

More or less, for large chunks in all three games, Spain have executed their primary plan and behaved like the child who does not share his toy with his peers. 1009, 569, and 995 are the number of passes La Furia Roja completed against Costa Rica, Germany, and Japan respectively.

Yet, their plan A of beautifully and continually shifting the ball around has not always necessarily had the cutting edge. Their xG of 0.6 and 1.0 after the Costa Rica fixture proves the point.

Moreover, their display against Germany and Japan gives the impression that the Costa Rica game was an anomaly, and similar to how it was for Enrique’s Spain in Euro 2020, the overbearing concern remains the inability to apply the finishing touch to patiently and intricately constructed moves. Another is their linearity because besides bringing on or playing Alvaro Morata, Spain do not have many tricks up their sleeves in the form of a plan B.

On the other hand, having won more matches in a men’s world cup than ever before (7), African teams are having a festival in Qatar, and Morocco, who topped Group F and qualified for the Round of 16 after 36 years, have been the continent’s torchbearers.

Only letting in one goal, Walid Regragui’s side have been a tough nut to crack for anyone who has tried. Ideally, they prefer to have a stronghold over the possession but considering the quality of their opponents in this world cup, they’ve adapted amicably and forego their desire to boss possession in favour of maintaining shape as a collective unit.

Hence they’ve had, what you might refer to as the exact opposite of a lion’s share of possession. But they’re superbly drilled defensively and have lethal firepower on the wings, courtesy of the sheer brilliance of their two fullbacks, Achraf Hakimi and Noussair Mazraoui, and their wingmen, Hakim Ziyech and Sofiane Boufal.

Much to the liking of their manager, with an xG of 2.4 and xGA of 2.8, their offence and defence have been fairly well-balanced.

Going into the knockout phase, The Atlas Lions are the new dark horses for many people, and Spain would not even dream of underestimating the threat carried by the north Africans.

Not the kind of performance you'd expect from top dogs of football ☹️#Lukaku #Germany #WorldCup pic.twitter.com/50A4FiA5tI

Previously, Bounou was selected to start the Belgium game but was replaced before the game commenced because he was not feeling good, and both their fullbacks also had minor injury scares. Currently, things are more settled in the Morocco camp with only Abdessamad Ezzalzouli not available for selection due to injury

Spain do not have any injuries or suspensions to worry about.

Even though Morata brings something unique to Spain’s table alongside being the tournament’s join-top goalscorer (3) at the point of writing, La Furia Roja should be earnestly banking on their way, and if they want events to unravel according to plan, the 20-year-old Pedri has to be their architect-in-chief.

Leading the charts for most passes in the final third (44) and fifth in the number of progressive passes played (21), the Barcelona boy is responsible for unlocking defences, and Spain would want him to bring his best game on Tuesday.

One of the four different goalscorers for The Atlas Lions, Hakim Ziyech has often been called Morocco’s Messi. The stature and the influence of the Chelsea forward is such that their federation had to switch managers because Ziyech had fallen out with the previous gaffer and wasn’t featuring for the national side.

Ziyech’s combination and synergy with Hakimi on the right side of the pitch is the heart and soul of this Moroccan side from an attacking point of view, and this duo, the most creative in the team, has generated a combined xA of 0.6.

Ziyech’s wand of a left foot is also crucial for his team in dead-ball situations, and there already have been numerous occasions in the tournament where his deliveries have created havoc and confusion in the box.

The howling Spain would have received from Enrique after the Japan game would perhaps prove enough for Spain to correct some of their flaws, and have enough in the tank to go past this impressive Morocco side. FootTheBall predicts a tense 2-1 win for Spain.